Ew! There's a Dead Chicken in My Chicken Soup: The Cognitive Dissonance of Disgust 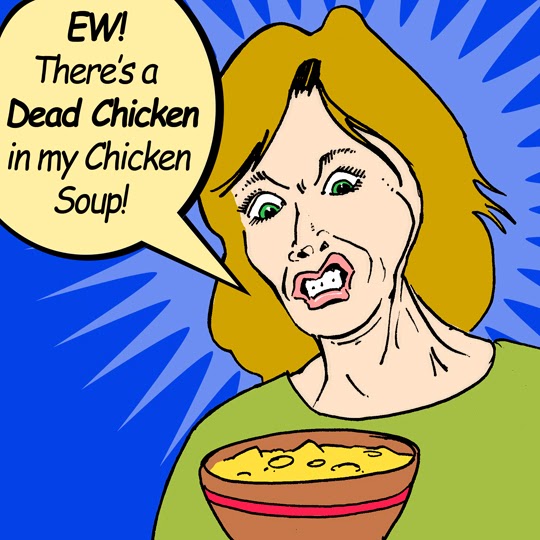 This is an open letter to Nicole Montgomery, a.k.a., the lady who discovered what looked like a chicken embryo in her chicken soup.

You don’t know me but I saw your video online last week, you know, the one with the alarming chicken part in your Campbell’s Chicken and Stars soup. I have to admit, it was kind of a shocker. By that, I mean that I found it kind of shocking that you were shocked. But then I realized that, yeah, you were not expecting to see that. I can forget sometimes that people have what seems to be irrational standards of what they do and don’t want to see when it comes to what they eat. You told the reporter, "I opened it up, and there was this speck in there -- I was like, 'What is that?' I looked a little bit closer and I was like, 'Oh, that looks like a dead chicken.'”

You did realize that there were dead chicken pieces inside that can of soup when you bought it, right?

I know that seeing that embryonic shape was not exactly what you were expecting but the other various chicken parts in the soup that you were going to feed your daughter were probably not much older than an embryo, most likely barely over six weeks of age when slaughtered. Still, I imagine that you might have been relieved to hear that what you discovered probably wasn’t an embryo. According to an employee from the lab that analyzed the “strange object” in question, you can rest assured that, “The odds are it’s just a veiny portion of the chicken. Those chickens are going to be pretty much de-boned and emptied before they’re ever taken apart to go into a soup product.”

That can of soup product likely just had a more veiny than usual piece of chicken flesh bobbing around in it. That’s supposed to be a reassuring.

I am curious, though: Was it the little body-shape that unsettled you the most? Was it that it drew your attention to something that you’d rather not think about when you eat or feed your child? I mean, the soup you purchased is called Campbell’s Chicken and Stars Soup. There is no fraud about what’s in it. (Oh, except the stars part.) I’m guessing that you were expecting the flesh to be in uniform little off-white chunks and seeing that unexpected veiny piece resembling an embryo was a disturbing moment. I don’t blame you for being disgusted, honestly. The food industry does such an excellent job of keeping us from remembering what we’re eating that when the usual obfuscation around a dead body is removed, it can be a pretty shocking moment.

We shouldn’t be comfortable with eating anything that we wouldn’t want to eat before being “de-boned” and “emptied.” We shouldn’t be comfortable with eating anything that must be presented in a particular way in order for us to not lose our appetites. Your gut reaction told you that this was something to not feed your child. Every time that veil is lifted, it’s an opportunity. The veiny piece that managed to make it through the machinery to appear in your can of soup was a gift, really. It was a chance to wake up, face reality and refuse to accept what we know is not fit for consumption.

So, Nicole, I am asking you, mother to mother, woman to woman, person to person, to do something different. Ask questions. Take this opportunity to think and expand beyond where you were before you opened that can of soup. This matters. This means something. It’s up to you, now, to not deny your gut. No one should silence their discomfort with eating death, whether the veins show or not.