On Fat Shaming in the Vegan Movement... 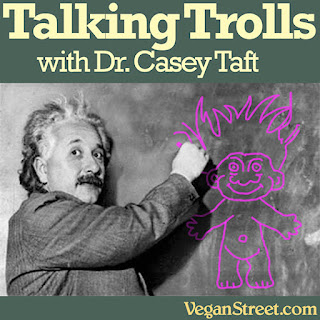 On Friday of last week, John and I were talking about this-or-that trolling comment of the day (it honestly happens so much, I don’t remember the specific incident) and John had the brilliant idea of Troll Week. From there, it all kind of came together. We’ve spent the last week mining the depths of our social media to bring a new winning (?) comment to light each day and have just generally explored the idea of online trolling. Monday morning, I thought about capping the week off with an interview with Dr. Casey Taft, Professor of Psychiatry at Boston University School of Medicine, co-founder of Vegan Publishers and author of the widely acclaimed Motivational Methods for Vegan Advocacy: A Clinical Psychology Perspective. As an internationally recognized expert in the study of trauma, Dr. Taft understands the importance of acknowledging and ending our violence towards other animals as a way to build a more compassionate world. He will also be joining me next week as my featured Vegan Rock Star. I am so glad that he could join us this week on such short notice and share his professional and personal insights and wisdom with us.

First, how would you define a "troll"?

A troll is someone who posts only to get a rise out of others.

Are there any obvious markers of trolling behavior online?

The most obvious marker is if they frequently post "BACON" in all caps.

What if it's not all caps? Just kidding. Is there anything else that strikes you as an obvious sign someone is engaging in trolling?

It's kind of hard to put it into words, to be honest. One needs to feel things out and determine whether or not the person is making an honest attempt to engage in discussion, or just attempting to inflame a conversation.

Conversely, what are some more subtle strategies of trolls?

More subtly, some trolls will attempt to derail and sidetrack a discussion in an attempt to take it away from an important ethical issue. For example, rather than discuss the fundamental question of whether we have any need to be killing and consuming non-human animals (we don't), a troll would like to change the conversation to focus on plants rights or the diets of early humans. This way, the troll and their target can engage in pointless debate for hours while never discussing the important issues.

I see vegans falling for this a lot, the moving of the goal posts. I do myself when I'm not paying attention as well. What do you recommend doing as soon as you notice this happening? Just bring the conversation back? Is there any advantage to pointing it out, like "I see what you're doing there"?

Yes, I recommend bringing it back to the core ethical issues and avoid going down that road to nowhere.

Knowing what you know about human psychology and motivation, what strategies do you recommend for being able to shift a trolling comment into a more meaningful interaction that could result in a positive outcome, for example, a person seriously considering what you have to say?

If we are talking about online, I think it's really important to keep in mind that our audience is larger than the individual troll we're interacting with. Often, there are many other "lurkers" who are witnessing the interaction, and our response to trolls can make a big difference in how we are perceived. It's a good rule of thumb to never give in to our inclination to jump down the troll's throat. If we can respond assertively and non-aggressively, we can show others that we are fully rational and composed when we present our vegan view. There will also be times, however, when the discussion has reached an impasse and we will just have to let the troll know that there isn't really any point in continuing an unproductive conversation.

Great point and this leads to my next question: Many of us struggle with wanting to get the last word in even when we know that it's futile. When should you know that enough is enough and there isn't the likelihood of a transformative dialogue with someone?

This is really the challenge for us advocates: to learn to diagnose the situation and determine our best approach and when to call it a day. When it seems that both people in the discussion have stopped listening and are just trying to argue their point of view, that's a good sign that the discussion is not productive.

Have you had any experiences that come to mind where you wrote someone off as a troll but were pleasantly surprised? What do you attribute that turnaround to?

I really try not to do this and I work to give everyone the benefit of a doubt, but I see others make this mistake all of the time! So often I see others assume that someone is trolling, probably because they're burnt out from dealing with so many of them. They come to assume that anyone asking a somewhat naive question is just trying to piss them off. This is something that I teach my patients as a psychologist; we should try not to assume the intentions of others, and if we assume anything, we should assume the best in their intentions.

I see this a lot too, especially on social media. People might be asking a question, not to undermine or get a rise out of anyone, but because they are genuinely curious and I've seen vegans can get very aggressive and angry with their questions. Most people don't realize how much passive-aggression and trolling vegans receive so they write us off as a bunch of really angry people. I think it's a good rule of thumb to take give people the benefit of the doubt if you don't know any better at least at first. Is there a good way to let your fellow vegans know that they should chill out? Is modeling a better example our best tool for this?

There may be times when it is a good idea to say, "Let's hold on! I think John is sincere in wanting to know more about this. Let's give him the benefit of a doubt." Other times I will just delete the negative comments and try to engage directly with the false troll.

Let's talk about real life, in-person trolls! From family members to co-workers, many of us have to deal with people who undermine and insult us and what we stand for in life, some who are passive-aggressive and others who blatantly attack. Many of us who are activists have also had the experience of the "drive-by" troll, those who use the hit-and-run approach of saying something like "Get a life!" as they speed-walk past us at a protest. I know that this is a HUGE topic, but do you have any advice for dealing with an in-person troll? Does it differ from how you'd approach trolling from a stranger online?

I think this depends on who the person is and how important it is to us if we want a continued relationship with them. Sometimes we need to decide that it's not healthy for us to continue to interact with someone who we feel is attempting to bully or upset us, and we need to set boundaries and limits. Other times, if it's someone who we want a continued relationship with, we need to find ways to express to them how their behavior makes us feel, and hope that they will listen to and validate us. In all cases, though, we have to make sure that we're really taking care of ourselves and are not allowing others to abuse us. That's obviously not good for us or for the animals who we advocate for.

Self-care is so important for sustainability. So another question for you: what is an example of vegans trolling? When, if ever, is it justified?

I will tell you a secret. I actually troll non-vegans on occasion. The way that I do this is to post provocative things on social media. They are always truthful, mind you, but I know that it will shake up some folks. For example, if we post something to the effect that one cannot claim to be an animal lover while eating animals, we get a big backlash on our page from dog and cat lovers. The reason we do this is because some people really do need a bit of a jolt of reality for them to question whether their behavior matches their beliefs. Secondly, when we do this, our posts go a lot more viral because of all of the angry comments and shares, which then causes our posts to show up on the newsfeeds of their friends. I know for a fact that we've helped many people go vegan as a result of our troll posts because we get many messages from those asking for help in their transition after such posts.

I guess I don't call that trolling but being provocative. Potato, potahtoe and all that. Okay, last question. Burnout is such a real danger to vegans: do you have any general mental health tips for those of us who engage with the public as animal advocates? Sometimes it can feel so soul-crushing.

Yes, try not to let yourself go to that dark place where you feel like everyone sucks. I think most advocates know this place I'm referring to. When we don't set boundaries and limits, when we don't take good care of ourselves, and when we don't know when to take a break from the trolls and the conflict, that's when we go to that dark place. Self-care in animal advocacy may sound cliché but it's really important if we are going to be effective advocates. It can be hard to give others the benefit of a doubt when we're in that dark place, and it's also hard to join with others in helping them change if we think that everyone is terrible.

Thank you, Casey! I so appreciate your time and all you do! Thanks for participating in Troll Week. :)