I Loved Him Like a Champion: The Ones Who Shape Our Hearts 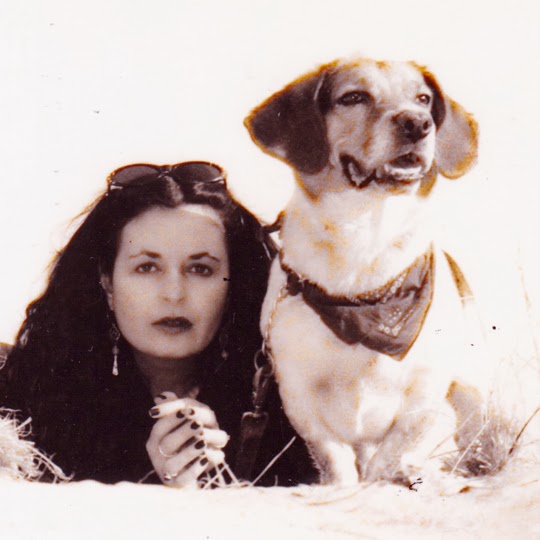 It was twelve years ago today, March 12, when I left Lenny to go to my birthing class for the baby who would be born exactly three months later, on June 12. When I left Lenny, he was resting on our balcony, his favorite spot in the home, enjoying the first day of gorgeously mild breezes and sun after a long Chicago winter. He wasn’t well, though.

After a completely ordinary Sunday morning and brisk romp in the park a few days before, Lenny became suddenly stricken with seizures and was showing signs of a stroke, but his vet wasn’t sure because not everything added up. It was a very difficult and heartbreaking time, right on the cusp on bringing our baby into the world, the new soul whom I couldn’t wait to introduce to Lenny, my first angel. That afternoon when I said goodbye to him on the balcony, Lenny had eaten a little better than he had the previous few days and as anyone who has cared for an ailing loved one knows, you cling to these small glimmers of hope like they are lifeboats in churning waters. Maybe he is getting better. Maybe it wasn’t a stroke but just a weird virus. The little mental tricks I played on myself, that reliable habit of magical thinking that Joan Didion wrote of in her memoir about dying, loss and trying to get an upper hand on uncontrollable circumstances, got me through those days.

I hadn’t left Lenny’s side since he’d first become ill but that night was our final Bradley Method class after eight weeks. We were all going to be first-time parents and we’d developed a close bond over the weeks. We wouldn’t see everyone together again until after we’d all had our babies in mid-summer. John and I discussed it; with a heavy and conflicted heart, I decided we should go to the last class and come home early. Lenny was on the mend, I told myself. He had even walked to the balcony by himself. Before I left, I sat with him on the balcony, the gentle wind blowing on his fur, and he looked at me with weary brown eyes that were nonetheless full of love, gently wagging his tail a few times, another sign to me that I should be hopeful. I got as close as I could with my big pregnant belly to that face that I loved, kissing his soft muzzle. It was our last class, some of the women would be giving birth within a couple of weeks, but through the hugs and all the excited jitters, all I could think about was Lenny.

When we came home after class, something made me start calling Lenny’s name even before we were in the door. John and I both rushed to the balcony and Lenny was still there, exactly where he was when I’d left. He was lying on his side, stiff already, his mouth drawn back, the cool yellow light shining on him. I saw him for just a second before I started screaming. My Lenny, my first baby. He was gone.

Lenny came into our lives eight years before, scrappy, street-smart and grungy, from a negligent home that routinely let him run loose on the streets of his north side Chicago neighborhood. My friend, an avid animal rescuer, had been trying to catch him for weeks but he’d always managed to evade her. She saw him running in the street on the Fourth of July, terrified and disoriented by the fireworks shooting up everywhere. Not long after that, my friend managed to coax him close to her with some food and, using a slipknotted leash hidden behind her back, she was finally able to catch him. She couldn’t keep him so she asked me if we could foster him until he could be adopted. Yes. John and I went to her apartment and met the dog she had named Lenny. He had a BB pellet embedded in the top of his head that his skin had grown over, teeth yellow with tartar, and just had gone through a second flea bath. He was a muscular beagle-basset mix with a big, gorgeous beagle head affixed to a speckled, low-slung basset body, his front legs warped inward and paws pushed outward in a permanent plie position. Lenny was an unconventional looking fusion of a dog but he wore his uniqueness with a show dog’s grace and pride. He also had the most beautiful, soul-stirring eyes I’d ever seen on any species. The longer he lived with us, the more his dignified essence emerged. He grew into his natural self. 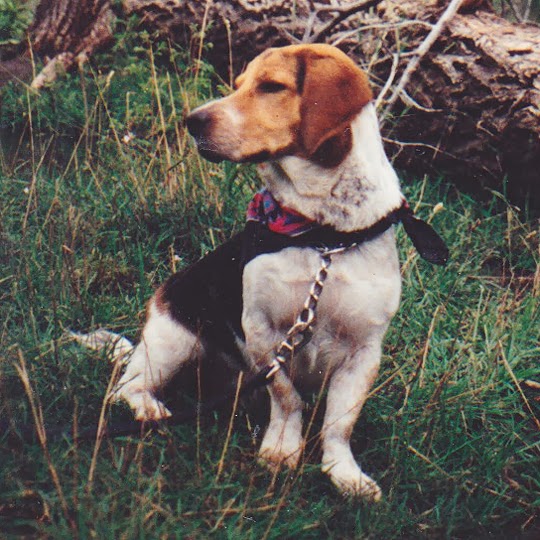 We had eight years of purely joyful companionship together, complete compatibility. How often can we enjoy something like that? I told Lenny every day that he was my angel and I think he understood. It isn’t really accurate to call him my first baby, though, as he wouldn’t have that. He had to be an equal or he had no use for you. He was my canine soul mate and our communication was so effortlessly natural that words would have only served to complicated things.

There is something about that unique connection with another species, one where we have very little if any verbal language that can be understood between us, that can foster a deeper bond than we might with other people. Our human attachments can be so complicated, so fraught with insecurities, game-playing and misunderstandings, that being able to relax in an uncomplicated, loving companionship together is a rare stroke of great fortune in life. Having that bulls-eye met of truly recognizing and rejoicing in one another on an emotional level is even more rare and exquisite. Loving that immaterial, distinctive spark of another - what we call the soul - and having that love returned back to us is something that is clearly one of the most invaluable treasures in life.

I believe that the concept of the soul as we use it is an arbitrary and romantic human construct. Excluding other animals from those who can possess souls is an example of our myopic arrogance. I also know that it would be hard to do to animals what we do to them if we agree that they have souls. It’s much easier if we think of them as soulless beings with just material forms and bodily functions. Anyone who has ever crossed the species’ barrier even briefly to connect with another on that emotional level should understand that this thing we call a soul - that spark within, that immortal, divine essence - is not exclusive to humans, though. I’d known this before Lenny came into my life but it was through our companionship that I really internalized it. Whatever this quality is that we call a soul, Lenny had it and so do billions of other beings not normally included within the parameters of what we consider capable of having one.

Being with Lenny molded, sculpted and ultimately shaped my heart into something altogether different than it was before we’d met. I like to think that I did the same for him. Before I left him on March 12, that ember was still in his eyes but, in retrospect, it was growing dimmer. We looked at each other, just being together, and I scratched his head, his velvety ears. He looked at me with such an expression of love that I immediately recognized my late grandfather in his gaze. It was exactly how my grandfather looked at me. That was our last communication before I left, a parting gift that I return to in my mind all the time. 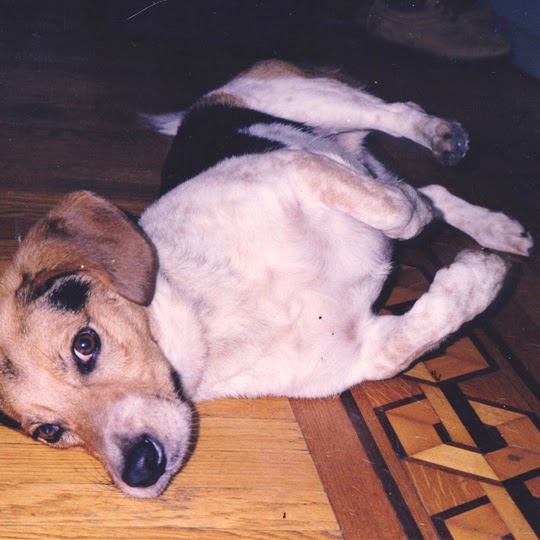 I can say with all honesty that I have messed up many things in life but I loved Lenny like a champion. I gave him every last ounce of what I had in my heart and, surprise, surprise, I found there was always more. I’m so grateful to have been able to recognize that spark in him and he recognized mine. Through knowing Lenny, I will never again believe that souls are the exclusive province of our species.
Posted by Marla at 8:34 AM