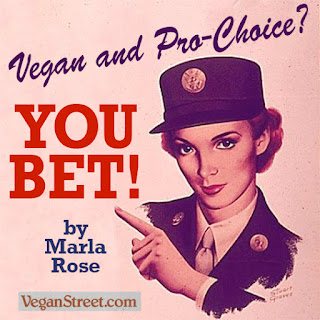 Over the years, I’ve gotten occasional questions about how I reconcile being a vegan and being someone who is pro-choice. After all, isn’t veganism about protecting innocent and vulnerable lives? To me, there is no reconciliation needed because I don’t feel my passionately pro-choice position contradicts my vegan values in the slightest.

With me so far?

Given society’s hierarchies, a cow on her own cannot protect her interests because she has the legal status of property; she is chattel. [Etymologically, from Old French chatel, meaning cattle, derived from catel, meaning property.] Those who “own” her make decisions about her body, including her reproduction, based primarily on financial considerations.

Her right to act in accordance with her best interests is observably demonstrable by her capacity to not flourish if this right were withdrawn. The calf inside her, though, is a potential life. The cow is here. She is physically present and, though people may agree or disagree on the conclusions, we can observe that the pregnant cow can both thrive and suffer, to the best that we understand it, in different circumstances. The sentience of the fetus, however, is far murkier and less verifiable.

Even given that there is an area of dispute about when in development sentience in a fetus can be observed and what degree of feeling may be available via that putative sentience, it’s still highly speculative. There is much we don’t know and I will admit that this works either way. The fact is, though, that we do know that the pregnant cow can suffer and does have sentience. There is nothing speculative about that. Given that, I stand for the rights of the mother cow, whose capacity to suffer and thrive are recognizable given our measures of observation and understanding.

Female humans have empirical needs for their best interests – for wellness, safety, self-agency – and I will fight for those rights. When denied her right to her best interests, she will suffer. Fetuses, however, do not thrive or suffer in provable ways that are equivalent to autonomous people. To our understanding, a fetus is without experiences, aspirations and a provable capacity to suffer, thus a fetus does not deserve an equivalent consideration of the female who may be carrying the fetus. This is a longwinded way to say that you don’t need to prove to me that people here on earth can thrive and suffer because we know that to be a fact; because we cannot say the same about fetuses, I conclude that they don’t get the same consideration.

Is this harsh? It doesn’t feel that way to me. I am guessing that if men got pregnant instead of women, this wouldn’t be a conversation at all.

Is it possible to be a pro-choice vegan? I am living proof that it is and I have zero inner-conflict about it. 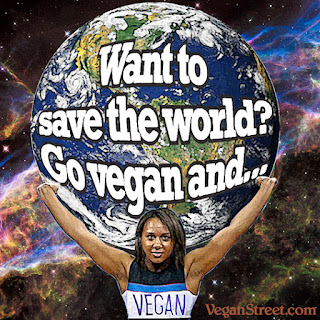 Vegans love to promote the environmental benefits of a plant-based diet and why not?  They are undeniably significant. Is it reasonable to think that because we’re vegan, we are doing enough to protect the environment, though? With our planet under serious threat and future generations seriously vulnerable – and the world’s most economically disadvantaged carrying the greatest burden – we can and should always do more, tightening our ecological footprints as much as possible. Being vegan doesn’t give anyone permission to rest on our laurels or give us carte blanche permission to not do our best to reduce our harm to this planet in every way we are able. Are you already vegan but wanting to step it up a notch or two? There are many small but impactful ways to shrink our ecological footprints and together they add up to something significant. As always, many thanks to the wise counsel of my amazing Facebook friends for helping me to brainstorm this list.

– Check out websites like eBay, Craigslist, Facebook groups like the Buy Nothing Project, and lots of local groups where people buy, sell, trade and give away used items before buying something new.

– Buying secondhand is more than just for clothes and knickknacks: if you need new furniture, cars, computers and books, look for used to reduce your carbon footprint.

– Turn off and unplug your computer overnight.

– Even if you’re vegan, not all plant foods have the same water footprint. Some are much more water-intensive than others.

– Take reusable to-go containers out with you when you eat out for your leftovers.

– Take a reusable mug out with you, too.

– Refuse anything packed in Styrofoam.

– Decline bags, napkins, straws, utensils and condiment packets with to-go food orders and use your own to eliminate waste.

– Take eating utensils, containers, straws and cloth napkins out with you.

– Use rags instead of paper towels for cleaning.

– Take your own reusable containers and fill them up in the bulk section of natural food stores. (Have a cashier or someone at customer service mark down the weight to deduct it from the final weight when it’s been filled.)

– In addition to bringing your own shopping bags when grocery shopping, bring your own reusable produce bags.

– Use produce that has gone a little bad by cutting out the bad parts; tossing wilted greens and fruit that is past its prime into a smoothie is also a way to prevent waste.

– Put the ends and unused parts of veggies into a freezer bag to use for making vegetable stock.

– Revive greens and other plants if they get a little wilted.

– Get a home energy audit and follow the recommendations as you can afford them.

– Learn about and implement the use of greywater around your home.

– Make sure your gutters drain into rain barrels to reuse the water.

– Drive less or give up your car if you are able.

– Grow as much food as you can and if you don’t have a yard, you might still be able to do window herbs or grow on a fire escape.

– Compost food scraps. If you don’t have a yard, you can still compost: there are still many places that would appreciate the donation.

– Hang your clothes out to dry.

– Wash your laundry with soap nuts, which can last for a year or two, to avoid detergents and fabric softeners in plastic bottles.

– Plan your errands and driving times to get the most done in one trip.

– Reduce or eliminate flying as much as possible.

– Buy local and seasonal as much as possible.

– Freeze, can and pickle produce for eating out of season, taking advantage of great sales or to make the bumper crops of the season last.

– Convert everything to energy-efficient light bulbs and turn off the lights when you’re not in the room.

– Make sure your windows are properly insulated.

– Solar panels are handy. Even if you cannot convert your entire home, there are solar chargers for cellphones, solar lights for patios, etc.
Posted by Marla at 11:14 AM 7 comments:

65 Ways to Un-Trump the World 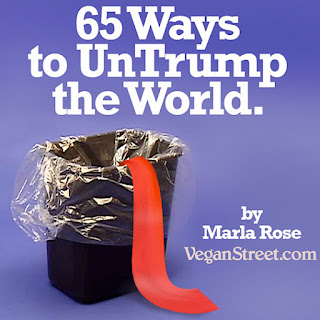 Donald Trump sucks, right? He’s odious and terrible and he Trumps up everything.

It’s easy to get depressed when the dark, noxious shadow of a nasty man-baby who has neither the teeniest bit of impulse control nor awareness of anything outside of his own interests looms over us. He is a human trigger warning surrounded by a bunch of lackeys in the form of advisors, highly paid babysitters and political allies who mostly see him as a handy distraction that allows them to loot and pillage while the getting is good. Despite this Trumping up of our world, though, I have to believe that all hope is not lost. With a little creativity and resourcefulness, we can Un-Trump it and un-Trump it for real this time. Because, let's face it, we can't let ourselves off the hook for the fact that the world was not exactly going in a positive direction before he became president. Ever. There were and are a lot of very Trumpy attitudes and conditions that we can't blame squarely on him. We can start to fix it, though, starting today.

Honestly, we could be in the dawn of a new age, and you could be a big part of it. Here are a few ideas to get you started…