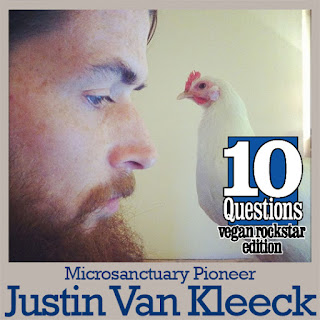 Justin Van Kleeck is an activist, animal caregiver and co-founder of the inspiring Triangle Chance for All microsanctuary along with his partner, Rosemary. As a pioneer of the microsanctuary movement, Justin is helping the average person who wants to start rescuing animals understand that it doesn’t need to take many acres and a big bank account. Using the example of TCfA, a small sanctuary in central North Carolina, which mainly focuses on chickens, he is helping people to not defer their dreams until when the stars magically align and their lottery number gets called but helping them to learn how to start a sanctuary in the here and now. It may not be a massive sanctuary but that may also be perfect.

A former academic, Justin is a freelance writer and editor, working on a variety of projects from the Project Intersect zine to his pro-intersectional blog, Striving with Systems, and is involved with different vegan endeavors in advisory roles. I am so glad that Justin could take some time out of his busy schedule to share his thoughts with us today. He is a true Vegan Rock Star. (My apologies for the weird spacing here that is making my perfectionist tendencies short-circuit: it appears to be a Blogspot issue.)

My connection to other animals started at a very early age—early enough that it seems like something that was “always there.” I grew up in a middle class American family that fed on fast food, junk food, and meat-laden meals (though I am proud to say I always loved vegetables and fruits!), and I had no inkling that eating differently was an option until my teens. I remember trying to go vegetarian in middle school, which lasted about a week. I lived with my father and, since we were on welfare due to his work-related disability, we relied heavily on others for our food access (which is not an excuse by any means, but it contextualizes the scope of my lived experience with food, dietary norms, and prevailing culture). Anyway, fast forward a few years: I went vegetarian as a high school senior and stuck with it into college. My transition to veganism happened after a period of reflection on the impact my lifestyle choices had on other beings and the planet. It was my sophomore year at Virginia Tech, shortly before my twentieth birthday. I forced myself to face the hard question of whether or not I could accept consuming products that might, in any way, have caused suffering to an animal (this was many years before I knew the full extent of the horrors of dairy and eggs). The answer was “no,” and I was vegan. I have never looked back.

This is a very hard question that I think about a lot as an activist, and especially now that most of my activism and advocacy focuses on chickens and other farmed animals in the context of rescue and sanctuary work. My positions have shifted seismically over the last seventeen years, but throughout, my concern has always been with ethics. What I wish I had known as a pre-vegan, and what would have gotten me to where I am now much more quickly, is just how deeply the process of domestication, selective breeding, and genetic manipulation has made the problem of exploitation a biological (and therefore inescapable) one. So many vegans tend to focus on conditions and treatment when it comes to humans’ use of non-human animals. But what my partner, Rosemary, and I have realized so clearly is that whether they are crammed in a battery cage or frolicking on the range, in an industrial shed or in a sanctuary barn, farmed animals are never free from the cruelty of domestication. “Laying” breed hens, who lay as many as twenty times the eggs that their wild ancestors lay, are just one example of this. But it shows up in every domesticated species: their biology has been twisted, shaped, and stunted for the specific purpose of providing benefit to humans. They have lost the true liberation of their free-living cousins—or I should say, they have had that liberation stolen from them.

If I had understood the true horror wrought upon the bodies of these innocent beings, I would like to think my path to veganism would have been much shorter, and I would not have wasted my time pretending that bigger cages and toothless regulatory programs actually meant anything.

3. What have you found to be the most effective way to communicate your message as a vegan? For example, humor, passion, images, etc.?
I wish I knew what was truly effective, but at this point I feel that grounding everything we talk about and advocate for in the stories of our family members has the biggest impact and is the most ethically consistent. By sharing their lived experiences, from the horrible situations they have escaped to the constant care they need once they arrive at our microsanctuary, I find it easier to frame larger issues in making a case for veganism. I am not convinced that a focus on astronomical numbers— for example, the nearly ten billion land animals slaughtered annually for food—creates a visceral connection to the reality of their suffering. Getting to know one individual, however, puts the entire system of exploitation into a perspective we can grasp and respond to. This personalizing potential of individuals is why non-vegans can get so frantic about saving one pig or cow who escapes a slaughterhouse, all the while munching on a bacon cheeseburger.

So, we work very hard to promote the understanding that those billions and billions are all comprised of individuals, each one unique and amazing and worthy of consideration. For Triangle Chance for All, this general philosophy informs a lot of our discussion of the residents, and Rosemary takes fantastic photographs that convey so well their personalities and lives. These are both very important (and very deliberate) methods of presentation, through which we seek to scale down how vegans and non-vegans alike see farmed animals…so that we can then recognize the true tragedy of their suffering and death.

Vegans actually give enough of a shit to actually try to do less harm to other animals. That means something.

Since I do so much direct caregiving and rescue for animals through our microsanctuary but also stay involved in the pro-intersectional vegan movement as well (through my work on Striving with Systems primarily), I see multiple sides of the vegan movement directly.

Firstly, veganism often seems to be shifting dangerously into the realm of consumerist lifestyle solipsism, which creates a general sense that swapping out what we buy is central to being vegan. Absorbing that capitalistic narrative risks deflating the inherently radical core of ethical veganism. For the long-term success of veganism, I believe that we have to focus on ethics and advocating for the end of all forms of use, not welfare reforms, and do a better job of talking beyond (but inclusive of) domesticated species so we recognize the importance of individual autonomy as a gauge for freedom. We need to be better about creatively engaging non-vegans in those discussions, for sure, but it has to be central. And a big part of doing this means understanding the subtleties of speciesism, and committing to an anti-speciesist position as a vegan activist.

Along with that, I think the vegan movement is doing a horrible job of shaking off the cultural history of white patriarchal society. I have been privileged to work closely with vegans of color, such as Aph Ko and Christopher Sebastian McJetters, along with others who are creating so much fantastic knowledge and grassroots community. Yet often the very best the popular vegan movement can do is link them in posts and talk about “inclusivity.” I am convinced that veganism has to be radical in every way, which means working towards collective liberation for all beings. That means we need to start recognizing all of the work being done outside of “the spotlight,” listening to these communities rather than trying to subsume them or silence them (please stop saying “All Lives Matter,” folks), and getting out of the way as they build intersecting but in many ways independent vegan movements. A few examples I would like to highlight are: Aph Ko & Black Vegans Rock, Grow Where You Are & Maitu Foods, PEP Foods, The Vegan Hip Hop Movement, and Women of Color Speak Out.

All beings want to live and be free, and humans have no right to take life, liberty, or bodily autonomy from them. Oh, and you cannot “love” someone while slitting their throat. EVER.

I wish I could concretely pinpoint specific resources in my evolution. Perhaps what might be more relevant is a list of resources that are definitely important for me personally in my current work:

Clean up chicken shit as a meditative practice! Honestly, watching a hen who is at death’s door slowly come back to life, or catching a rooster who has been dumped and would have died in short order and getting him to safety, or busting your ass to coordinate a rescue, transport, and placement for someone whose time is almost up, are all very good ways to stay motivated. A lot of small-sanctuary folks, like us, are charged with doing everything and then some—holding outside jobs, caring for animals 24/7, doing outreach, fundraising, and engaging in rescue, to name a few—while also shouldering what is possibly the biggest challenge: losing family members, even when every possible effort has been exhausted to make them well again. Sanctuary life is emotionally traumatizing, to a degree that I could never have grasped before getting into it, even while it is without doubt the most rewarding, fulfilling, and important work I have ever done in my entire life (one of these days I will use my doctoral diploma as a liner for a chicken crate!). I wish I could give good advice for this question, but I am not adept at “self-care” and taking breaks; there is too much to do. I eat some, I sleep some, and that seems to be working so far.

Chickens. They are amazing. Even with everything we have done to them, they are awe-inspiring. Learn about who they are, their horribly distorted biology, and the standard practices involved in keeping them at any scale. We know so little about them, still, and most of what we know is pathologically influenced by husbandry and production standards, so there is much work to be done here (and this is fairly true for all farmed animal species).