Let's allow ourselves to fail. Not only that, really let’s all try to embrace failure. Court it. Own it. Bathe in it. Be proud of it. Welcome it. Dance with it. When we do that, we’ll know we're flying with the giants.
Posted by Marla at 9:24 AM No comments: 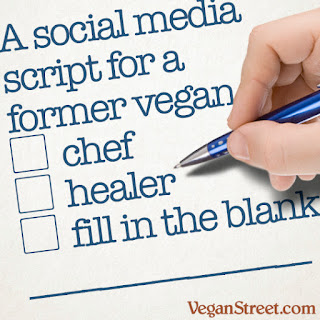 Check one or more answers as apply. Copy-paste and post.

So in case people are gossiping or whatever, I thought I'd let you hear it directly from me because I believe in [___authenticity ___transparency ___keeping it real]. The “rumors” are true: I'm no longer vegan. I was vegan for a while and I really loved it but in recent months have begun thinking that it was closing me off [___spiritually___as a chef___as a healer] so I am leaving that label behind. I am releasing my veganism with love and gratitude but it would be dishonest to myself to continue on this path, which had begun to feel [___limiting___inauthentic___restrictive] and thus was stunting to my personal and professional growth.

I no longer believe in closing myself off to the bountiful offerings from the animal kingdom of honey, dairy products, eggs, meat, etc. because I think that rejecting these offerings is closing myself off to the whole abundance of the human experience. If I can't feel gratitude and lovingly accept these offerings, I am also not accepting the dark that comes with the light, the yin with the yang. In this acceptance of my shadow self, I am breaking free from [___labels___boxes___restrictions] and setting my [___soul___spirit___creativity] free. In setting myself free, I give others permission to do the same.

I am liberating the animals’ souls when I eat what they have graciously given us. There is no good or bad; there is only [___love___fear___vibration]. There is no death, only cessation of life as we know it. What's up is down. What's down is up. Whoa. Anyone else have the munchies? (By the way, is recreational pot legal here yet? How about recreational acid?)

So I have learned to accept these offerings from my animal cousins with love and without judgment, and anyone I [___cook for___heal___coach] will also benefit as I embrace these offerings with the utmost gratitude and respect. [___Mother Gaia___Source Energy___The Infinite Universal Spirit] guides my every decision so it cannot be wrong. I am [___Italian___one-sixteenth Cherokee___a Shaman] so if you see me enjoying sheep's milk cheese, organic ghee, homemade bone broth or a beautiful, fat salmon that swam free until it was gently netted, please understand that I am simply returning to a natural alignment with my [___ancestral roots___state of allowing___creative flow].

Am I still largely vegan? You bet! I will also keep turning people on to high-vibration, happy plant foods, nourished by the sun, lovingly cultivated and celebrated. However, I would rather eat once-avoided animal products that found their way to me with love and appreciation than low-frequency plant foods, brought to me with a miserly, fearful spirit. This is how I nourish myself and that is how I believe we will save one another, through [___high vibration___love___releasing judgments].

Breaking free of the vegan [___label___box___limitation] is the next logical step of my natural evolution, allowing me to embrace all of the Universe and what She has to offer in a way that I didn’t as a vegan. If you’re upset because you contributed to my [___GoFundMe___Patreon___Kickstarter] or referred people to me when I was still in the vegan box, all I can say is I hope you find peace and will find it in your heart to eventually support my full [___journey___path___evolution] as I do yours.