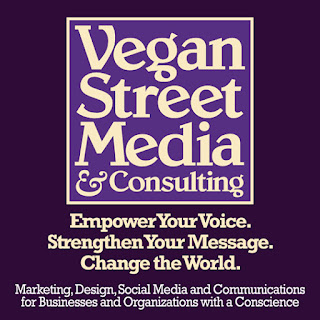 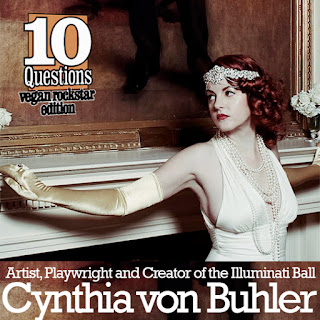 This week’s Vegan Rock Star is animal rescuer, multimedia artist, playwright, director and surrealism-enthusiast Cynthia von Buhler, a creative force of nature who builds immersive theatrical productions, most recently The Illuminati Ball, an homage and reinterpretation of a legendary surrealist dinner party from 1972. The Illuminati Ball, happening on select dates through August at a secret location an hour outside of NYC (they are taking applications) is described as what happens when you cross “Eyes Wide Shut with Burning Man and mix in a healthy amount of science fiction.” With fire performance, opera and "esoteric ceremonies" as well as audience interaction in the form of animal kinship roles and an appearance from Persephone, Cynthia’s pot-bellied pig, The Illuminati Ball will also feature an all-vegan menu. In other words, this is not your typical potluck or dinner theater experience.

When not developing vegan surrealist immersive theatrical events, Cynthia is a children’s book author, visual artist, performer, and creator of some very cool cat things. She is also a longtime animal advocate and I am honored to feature her today as our Vegan Rock Star.

When I was a girl, my parents got me a de-scented skunk as a pet and it taught me about unconditional love. A skunk is a wild animal and shouldn’t be a pet. She wasn’t remotely cuddly, and would constantly bite me. Even so, I made her meals every day and tenderly cared for her until she died of old age. Later in life I began rescuing feral cats. I even wrote a children’s book about one, The Cat Who Wouldn’t Come Inside (Houghton Mifflin). Feral cats require a high degree of unconditional love. The meaner the cat, the more I want to understand and love it.

My most important value is compassion. If I wouldn’t like to be treated a certain way, why would they? Why is my life more important than theirs? Why would I take their whole life away for one unimportant meal for myself? It just didn't make sense to me — so I stopped eating animals. In the application for The Illuminati Ball, two of the questions I ask candidates are 1) Do they like animals and 2) Do they eat meat? Most people rave about their deep love of animals, but a few questions later they excitedly explain how much they adore eating meat. That doesn’t compute for me at all. There’s a serious disconnect happening here. I always felt it was wrong to eat animals and over the years those feelings have grown stronger. So I educated myself on my own disconnect.

2. Imagine that you are pre-vegan again: How could someone have talked to you and what could they have said or shown you that could have been the most effective way to have a positive influence on you moving toward veganism?

Seeing someone I admire thriving as a vegan was the biggest influence for me. They showed me it is possible. Of course, watching animal cruelty videos affected me, too. We need to face the truth.

I was also influenced by meeting animals face-to-face. Places like Farm Sanctuary are amazing. Take people who eat meat to meet the animals. Quality time with a farm animal can have a profound effect. Posting positive videos of animals released from captivity can also be extremely moving.

3. What have you found to be the most effective way to communicate your message as a vegan? For example: humor, passion, images, etc.?

I have a large number of followers on social media, and so I try to set an example by posting articles and pictures. I do not constantly barrage people with negative images or videos; I occasionally post something strong, but not often, or it may turn them away. I try to remain upbeat and open to their concerns. I gently express my feelings to naysayers. If they admire my lifestyle, I can influence them when I talk about my own choices. Posting videos of Persephone running happily around my yard, bathing, blowing bubbles in her water bowl and snuggling with me shows people how sensitive and sweet pigs are.

During The Illuminati Ball, kinship leaders give the most compassionate of their seven “Illuminati candidates” an antique key with a note telling them to “see Cynthia.” These people receive private visits with Persephone. They pet her, feed her and give her belly rubs. I also introduce her to everyone at the end of the show. If you pet and feed a living pig, you might think twice about eating bacon the next morning.

I think social media is having a profound effect on the movement. We can distribute information and visuals more effectively now.

The Ag-Gag laws are a disaster. We need to fight them to the death.

Perception. Some vegans come across as militant or condescending and that scares people away. We need people to perceive us as open-minded, healthy and wise. We should try to be understanding and set a good example. Most of us were once meat eaters (thanks to our parents), and we need to remember that disconnect in order to help others bridge that gap.

My best pitch would be to bring Persephone onto the elevator. When they meet her they fall in love.

I illustrated a book by Jason Webley and Amanda Palmer, “Evelyn Evelyn, An Unfortunate Tale in Two Tomes.” Investigating and drawing the plight of circus elephants and farmed chickens really affected me. I had already stopped eating most meat by the time I illustrated it, but drawing this book made me stop eating chicken soup, something I once thought I couldn’t live without. I read Animals Make Us Human by Temple Grandin and Skinny Bitch. I recommend showing people Cowspiracy. This film led me from vegetarianism to veganism. The Chipotle animated factory farming video is also remarkable, having been created and released by such a large fast food corporation. It’s extremely powerful and I wish more people could see it. I’m still evolving. I’m still learning.

8. Burn-out is so common among vegans: What do you do to unwind, recharge and inspire yourself?

Because I’m a vocal online advocate for animal rights, other activists send me horrific animal cruelty videos. I’ve seen most of them already and sometimes when I’m feeling angry and overwhelmed I cannot watch them. Many of my activist friends have written me saying that they are so depressed about the plight of animals that they can’t get out of bed. I have been there myself and I tell them they need to stop watching and reading the bad stuff. They will be useless to help if they are paralyzed. Sometimes we need to step away in order to become strong again. Spending time loving the dogs, cats, pigeons and pig I rescued help me recharge.

I’m starting an Illuminati for animals. I’m seeking successful people who want to use their talents and businesses to help gain power for the powerless. We will have yearly retreats at my lakefront estate to brainstorm solutions to help animals. I will be sending membership invitations to companies, organizations, artists and activists who have done something exceptional for animal rights. I will also invite people with skills we could use who might not already be involved in animal activism, like animal-friendly journalists, politicians, scientists or lawyers.

The Art of Listening (Or Your Allies are More Important Than Your Ego)...