Collective Nouns for Fun and Sport... 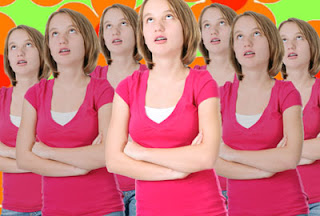 Sometimes, the very best way to express the nature of an assemblage of beings who share something in common – a trait, a philosophy, a species - is through a really apt collective noun. Chillingly, a group of crows is referred to as a “murder,” much like a group of lions is referred to as a “pride.” I think it’s time to add more to the common vernacular because, really, how many times can you say that that “group” or, even clumsier, “bunch” of foodies in your office is really working your nerves before you long for something that is both more precise and more vivid? How much time do we waste trying to come up with something more elegant and fitting until we fall back on one of those standbys again? Before your hackles get raised, please bear in mind that I belong to several of the classifications below (see: vegan, feminist, Chicagoan, mother, Jewish) and this is all in the interest of strengthening our linguistic muscle.
Hence, here are some new collective nouns to consider:
A douchebag of hipsters.
An eye-roll of teenaged girls.
An annoyance of vegans.
A meltdown of toddlers.
A closet of right-wing politicians.
A drag of dieters.
A tremor of coffee drinkers.
A Spock of sci-fi fans.
A nitpicking of grammarians.
A judgment of evangelical Christians.
A stench of environmentalists.
A Gingrinch of narcissists.
A smug of foodies.
A harassment of Jehovah’s Witnesses.
A furnace of climate change deniers.
A contusion of Black Friday shoppers.
A swoon of Leonard Cohen fans.
A scowl of feminists.
A squirm of kindergarteners.
An extravagance of theater majors.
A sacrifice of Jewish mothers.
A reflux of drive-thru diners.
A lurch of frat boys.
An expletive of bike messengers.
A smirk of college Republicans.
A hot flash of menopausal women.
A Panera of suburbanites.
A hit of Chicagoans.
A stint of 18-year-old bisexuals.
A salmonella of cafeteria workers.
A bore of historians.
A confusion of map readers.
A greenwash of organic meat consumers.
A grunt of weight-lifters.
A wimp of Democrats.
A colonic of Californians.
A distance of Protestants.
A hormone of teenaged boys.
A snicker of satirists.
A haplessness of TV dads.
A scorn of TV moms.
A mindfuck of Dadaists.
A gasp of new mothers.
A stent of meat-lovers.
A prostate of Civil War reenactors.
A pox of Renaissance Faire workers.
A conceit of New Yorkers.
A hypocrite of Republicans.
A melanoma of sun-bathers.
An outbreak of reality TV stars.
A scab of skateboarders.
A shrill of Tea Partiers.
A hoard of cat lovers.
A pomposity of university professors.
A projection of amateur psychologists.
A terror of birthday clowns.
A callous of Libertarians.
A smite of Creationists.
A predation of bank executives.
A preening of Los Angelenos.
A smear of lawyers.
A gloating of DIY crafters.
Do you have any to add? (By the way, any newcomers, please check out the website for my new novel, The Adventures of Vivian Sharpe, Vegan Superhero.)

Why We Need New Superheroes...