On Alice Walker and History as Destiny 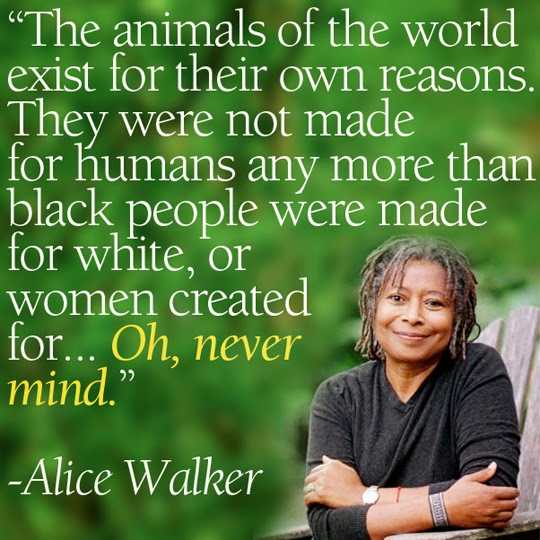 I grew up with parents who weren’t keen on cooking in an era of processed convenience food, thus I grew up on salami and Kraft singles, frozen dinners and Lipton Chicken Noodle Cup-a-Soup. The one thing my mother made that actually involved washing a mixing bowl was brownies (Duncan Hines, yes, but it still had a couple of steps, so it was pretty much homemade by our standards) and my father would sometimes make a big pan of fried potatoes on the weekend. That was it. I’m not saying this to whine but to give a little background: I did not grow up with a cornucopia of colorful produce that helped to pave the path for my eventual vegan evolution. I grew up on convenience food for the most part, but I also had a grandmother, on the other hand, who made pretty much everything from scratch, so a couple of times a month, I would get homemade matzo ball soup and brisket, rugelach and kugel. She is the one who taught me how to cook. I grew up on the junk foods of the 1970s as well as the homemade Eastern European cuisine that I associate with the person who I loved the most growing up. I have nostalgia attached to both, especially to the latter.

Naturally, all of us were raised with different food traditions and habits. Whether that was junk food, ethnic dishes from our heritage, the popular food of our time or a mix of everything, we were all raised with some kind of distinctive food culture, but most of that is still familiar to one another. In other words, the food environment we were raised in is unique to us but the differences are not so vast in any given culture. This makes us both distinctive and, well, sort of like everyone else. Unless we grew up in a very unconventional way, we are more or less like everyone else in terms of what we were raised to eat. In other, other words, we may not be the special little snowflakes we imagine ourselves to be.

I was reminded this the other day when my friend Robert Grillo (of the amazing group, Free from Harm) posted part of an interview with famed Pulitzer Prize-winning novelist and feminist Alice Walker, expressing disappointment that she, who once wrote very movingly of how humanity’s cold betrayal of the animals compelled her to stop consuming them, has resumed eating animals again. The same Alice Walker who once wrote, “The animals of the world exist for their own reasons. They were not made for humans any more than black people were made for whites or women for men,” apparently no longer agrees, at least in her actions, with this stated view. In an interview after the publication of her book of essays inspired by her life with her flock of backyard chickens, when the interviewer expressed surprise that she eats birds, Ms. Walker said, “I know, I know. It's a contradiction and I have been a vegan and I've been a vegetarian, but from time to time, I do eat chicken. I grew up on chicken and I accept that.” In direct opposition to her powerfully articulated position years before, it seems that now, the chickens were “made” for her and this is justifiable because that was how she was raised.

She accepts how she grew up as an excuse to continue eating animals. I don’t.

Like Alice Walker, I grew up eating chickens (and eggs and cheese and cows and turkeys and...) but that is not where the story ends. That was how I was raised, yes, but I have kept evolving. So have millions of other people who do not accept that our history is carved onto us as our destiny. Still, how many times have I heard people say, in an attempt to justify current habits, that they “grew up on the veal parmigiana that my Nonna made” or “I was raised in a family that ate a lot of meat,” or “Polish food is very meat-centric and that was how I grew up,” or whatever it is that they say? A lot. It’s especially saddening, though, when the person who gives voice to this tired rationale is so highly respected for her penetrating depth and powerful mind. If even Alice Walker, someone who once wrote about empathy in such a heartfelt and moving way, abandons her convictions because she “grew up on chicken,” I’m going to hazard a guess that the concept of history as destiny is a pretty ingrained one that many of us hold as true.

Here’s the thing, though: Unless you grew up on a vegan commune, most likely, you grew up eating a lot of meat and animal products. I honestly don’t think I had a salad until I was in high school, and certain things (including most of the mainstays of my diet today), I didn’t have until college and beyond. I was well into my twenties before I learned that kale was something people actually ate, not just an inedible decoration on a buffet table. Nutritional yeast was the fairy dust that wouldn’t blow into my life until my late twenties. I grew up on all the same familiar stuff that every kid on my block grew up eating in that era. A raspberry Pop-Tart for breakfast. A bologna and cheese sandwich in my lunch box. Spaghetti and meat sauce with that weird frozen garlic bread that I loved for dinner. I also grew up on the ethnic dishes of my grandmother’s cooking. This was my food environment.

When people say that they grew up eating animals as if this gives them a pass to continue doing so, to me they are implying that those who currently do not eat animals didn’t grow up the same way - but this is untrue. Also, in addition to our food culture, there are other family legacies we may have been raised with in our households. Legacies of abuse. Legacies of addiction. Legacies of all sorts of things we don’t necessarily want to carry over into in our own lives. These legacies may feel comfortable to us because they are familiar but if they harm ourselves or others, how can we justify not trying our best to break the cycle?

I very much understand the pull to continue eating the dishes that we associate with comfort, nurturing and love. If there is one thing I’ve learned, it’s that food is deeply emotional to us. The food from my grandmother represented her in a way: it seemed to be suffused with her unique essence, the one I just wanted around me all the time. What I loved, though, wasn’t the chicken or the matzo balls: what I loved was my grandmother’s spirit and what she meant to me, how I felt when I was around her, what she represented in my life. I loved her, not the food. Still, to be able to call up her spirit whenever I miss her, I can eat the foods she used to make, but I can create them with my values of today. I don’t have to give up anything, and there is nothing like the feeling of accomplishment when I’ve been able to recreate something she used to make - and the feeling it stirs up in me of viscerally remembering her again - without compromising who I am.

Our history is not a straight line to our future and thank goodness for that. If it were, we’d have handy excuses for all kinds of behaviors that are harmful to ourselves and others. The way we were raised leaves an imprint on us but doesn't obligate us to continue it. My grandmother loved me as I was and I feel that in not compromising while recreating the dishes she made, it is an active way of continuing to love her, to honor her memory and relive our time together. Love is dynamic and creative, it isn’t static and frozen in time like a museum piece. How we were raised is an influence but not the final word on how we are to unfold. When we choose to no longer participate in practices that we no longer agree with, we are not erasing our histories but we are taking an active role in shaping who we are to become.

You grew up on chicken, Alice Walker. Well, so did I. I’m not going to use that as an excuse to compromise myself, though.
Posted by Marla at 8:59 AM