The Orthorexia Dilemma: Is Veganism an Eating Disorder? 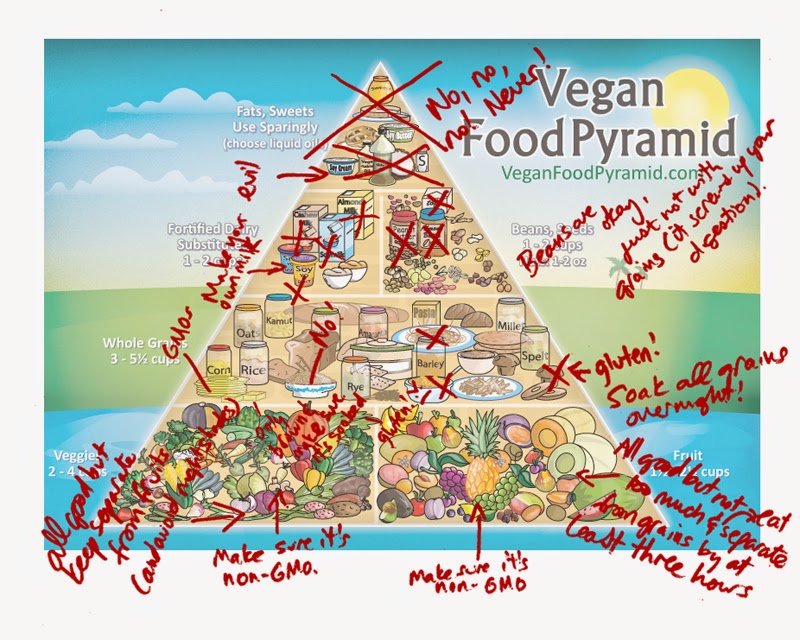 When I was 13, I stopped eating. I was about to start at a very competitive high school that September and I wanted to be thin and popular. It started out as just a diet but as it quickly gathered speed it became something else, something that mushroomed as it progressed until I no longer controlled it. This thing, whatever it was, soon became a despot that ruled my life.

That summer, I was in a play so I was away from my home rehearsing most of the day. It was a breeze to not eat lunch there and be able to fly under the radar. At dinner, I developed a method for cutting up food and discreetly spitting it out into the napkins I’d stacked on my lap. Breakfast was a bagel that got fed to the dog under the table. (My waist shrank in inverse proportion to poor Buffy’s.) Originally, I would allow myself exactly 50 grapes a day, then 30, and I did hundreds of sit-ups a day, so many that I developed a painful rug burn line along my spine, which was beginning to protrude more and more. Once a week, I would walk to the neighborhood drugstore and steal the diet pills that managed to make my heart race even more than the shoplifting actually did. I wore loose clothes to make it harder to detect the weight loss and I kept my calorie counter nearby at all times, not that I was eating anyway. I just wanted to know what everyone else was eating so I could judge them. I would float in the bathtub and one night, I discovered that I was starting to grow downy hair on my stomach. My period stopped. I had read about this in a brochure I picked up somewhere: My body was in starvation mode. I was a success.

My mother threatened to have me hospitalized and I relished the thought of those doctors trying to force me to eat. I would be like Regan from The Exorcist and all those doctors in their white coats would run from the room in terror. Not long after that threat, though, my grandmother came to our house and she cried when she saw me, my hollow cheeks, the dark circles under my eyes. She just turned away from me and cried in the kitchen. My grandmother was my world and I’d never seen her cry before. I couldn’t bear the guilt so I started eating again that night. I weighed 74 pounds and was getting heart palpitations at the end.

This thing that had taken me over started out like any other diet but then found itself powered by a seemingly endless fuel source of social pressure swirled inside a cocktail of control, anxiety and self-hatred. This was a maelstrom inside me and it was already there before I started what my parents referred to thereafter as my “crazy diet”. My diet plus the extenuating circumstances in my life were what it took to light the sparks that already existed into a blazing inferno that burned out of my control. It took years after this original foray into anorexia to not occasionally fall back into that pattern again.

I am writing about this because there have been some bloggers, including one who has gotten a lot of news mileage but I am not going to add to it by linking here, who have publicly given up their veganism and linked it to worsening or developing an eating disorder. Specifically, they referenced something called orthorexia, which is an excessive preoccupation with avoiding what is perceived to be unhealthy foods, and they connected it to their veganism.

Here’s the thing: I think it’s a crock. Mostly. I’ll get to that “mostly” part in a moment.

If anyone is empathetic to those struggling with eating disorders in our society, I am. I know that particular hell personally because I have walked it. I also understand the pressures to be thin, to meet society’s expectations of what “hot” means, and I can plainly see what a profoundly disturbed food culture we live in today. Shuffling popular culture’s hateful messaging to and about women with incendiary attitudes about food that border on the obsessive, many of us have the perfect storm waiting to happen. Back when I had my own involvement with an eating disorder, we lived in a different world, one where we weren’t exposed as pervasively to messages about how we are supposed to look and one where there wasn’t nearly as much of an environment of paranoia about what we eat. Today, we are supposed to be concerned about alkaline versus acid, high carb versus high protein versus high raw, blending versus freaking juicing. We should be mindful to not drink water with our meals lest we mess up our digestion (and is that water reverse-osmosis and spoken kindly to or, sigh, just filtered?), not to mix fruits and vegetables, strive to eat mono-meals in a particular order throughout the day, and on and on. (And this isn’t even delving into the hornet’s nest that is GMOs.)

I understand the stress. We live in a pretty confusing, complicated world where we are exposed to countless other opinions about what we eat that are presented not only as fact but as the magic bullet to health, beauty, slimness, agelessness and more or the cause of the very opposite. One’s emotional response to this milieu is not the fault of veganism, though. Our response is what we bring to the table, literally. Our disordered thinking may well get exacerbated by the world around us but it develops within us and is not forced onto us from outside forces. This was true all those years ago when I was adding up the calories of each individual grape I ate and it remains true today, when we are bombarded with shrill scare tactics and baseless promises. Harsh as this may sound, our response to this disordered culture is ours to own and to take responsibility for fixing within ourselves. Blaming and pointing fingers is just that: Averting responsibility and going for an easy excuse. Just as I had to look within to find causes and solutions for my anorexia, so do others. It was not something that anyone or anything else did to me. The reality of disordered eating is that it is much more complex and much more personal than that.

The blogger who built up a large fan base and went on to denounce veganism as triggering orthorexia within her said that now she is seeking “balance” rather than restriction. Those of us who have been vegan for a while understand that veganism really has very little to do with restriction: We no longer perceive animal flesh and products as food. Accusing vegans of stringency for excluding these things from our diet is like accusing someone who doesn’t eat cardboard and clay of restriction. We know that within the parameters of what we consider food, it is easy to find both balance and abundance. If you come to veganism with a framework of disordered thinking about food or it comes to the surface while vegan, that is what you have brought with you.

This is where that “mostly” part comes in, though, in reference to blaming veganism for disordered thinking about food. While I think a great deal of the high profile decamping is a crock and an attempt to widen a fan base, I can also see how current trends in how some people frame veganism can be like kindling to an obsessive personality. This trend within veganism to employ tactics that manipulate anxieties around fat, nuts, fruits, grains and who knows what else can aggravate someone who is already on overload and we, as a movement that is rooted in nonviolence, justice and kindness, should play no part in this. It is unprincipled and antithetical to our movement as well as an injustice to those, human and otherwise, who would benefit from an adoption of a vegan framework, which is, well, pretty much everyone.

It is what we bring to veganism that determines our mentality about it, but we don’t help the cause by cultivating a culture of anxiety and phobic thinking around what should be a source of joy, abundance and empowerment. We should be a voice of balance, reason and equanimity in this very disturbed food environment that preys upon body image angst. Veganism isn’t a dietary fad and we shouldn’t resort to either trumped up promises or the pedaling of fear in our outreach because that is what we will convey to the public. To me, veganism is a pathway to living in alignment with my deepest core values and a way to actively cultivate the world I want to live in, not an instrument used to drumbeat more shaming, more anxiety and more misogyny into the world. If people feel healthier as vegans, fabulous! Please understand that I am not one who really cares how someone gets their foot in the door. I am not one who says that vegans are only allowed in the club if they are here for ethical reasons because, frankly, I don’t think the animals would give a damn why someone is not eating them and their babies. That is not what this is about: This is about being mindful of our messaging.

Does veganism cause eating disorders? Emphatically, no. Do we need to remove our participation in the disturbed, manipulative culture surrounding food and shame today? Just as emphatically, yes.
Posted by Marla at 8:13 AM