The Meeting of the Trolls... 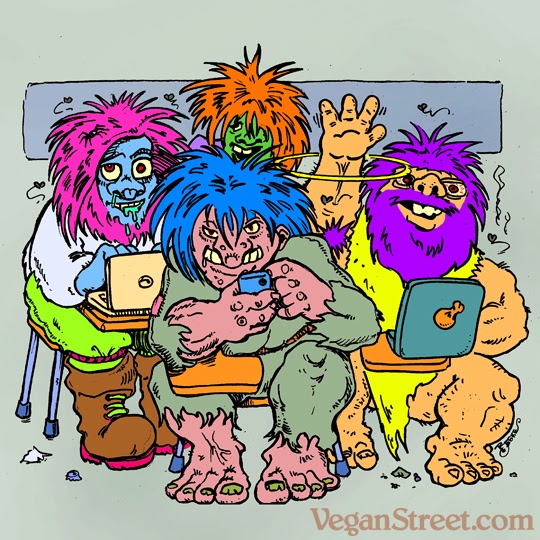 “Good morning, everyone. Today is the - what is it? - 2031st meeting of the Alliance of the Hater Brigade. Thanks for coming, everyone. I think we’re going to start our meeting now.”

“It’s about time. This has been a total waste.”

“Actually, IronMan77, it’s right on time. Anyway, you’ll find refreshments in the back -”

“Well, if you wanted something else, I suppose you could have brought something, Zeus’sThunderbolt. Now, according to my notes, tonight’s meeting is about "New Strategies in Trolling." Today we’re going to discuss vegans and what to do about them. So, let’s get right into it: a vegan recipe pops up in your Facebook feed -- what do you write?”

“That would look better with some meat in it.”

“You can just shout it out, TitMouse. Remember, you’re a troll.”

“They do, I know. TitMouse is right. I saw this one video once that proves it.”

“F*#cking vegans and their judgments. I’d say, ‘What about the carrots and celery you eat? Why don’t you feel sorry for them, you hypocritical crybaby?’”

“I knew a vegan once who died. It’s not healthy.”

“Okay, GrumpyCat’sMeow is bringing up an excellent strategic point. If we can bring personal anecdotes into what we say, they can’t be disputed, no matter how irrelevant or fabricated. GrumpyCat, let’s role play here -”

“Who’s the doctor and who’s the nurse?”

“No, really. Let’s, you know, act this out. How can you bring your personal anecdote into, say, a vegan recipe share to defeat it right away? Let’s imagine that I’m a vegan who really annoys you and I just shared a recipe. What could you say, GrumpyCat?”

“That’d be better with bacon.”

“Right, yes, but remember the anecdote thing? I really want to explore the possibilities with that.”

“Oh, yeah. You think you’re so healthy but I once worked with a vegan who died.”

“Okay, let’s flesh that out. Remember, I’m a vegan who annoys you. Tell me what happened.”

“And... I don't mean to reverse-troll you, but how is this related to his veganism?”

“He was going to the farmers market. I’m not actually sure that he was vegan, though. He ate vegetables. And, actually, I’m not even sure if he died because I just heard about it. Or maybe I saw it on Law & Order: SVU. I can’t really remember now that I think of it.”

“Regardless, Darwin’sMonkey, the point is that if we want to successfully derail a thread, we need to move forward with confidence and avoid getting into that confusing realm where we question ourselves or others find flaws in what we wrote. This is why sticking to personal anecdotes is useful: they are impossible to prove wrong. Okay, now I’d like to discuss other strategies for sidetracking vegan content. What else have people found useful?”

“Okay, what about specifically about bacon, RAR444?”

“Yeah, the beauty is you don’t need to say anything else. Bacon is a universal language.”

“Or ‘Mmm, bacon.’ You can also just say it out of nowhere. That really pisses off the vegans. They all get, like, so pissed. It’s hilarious.”

“Also, ‘That would taste better with bacon.’ Speaking of, there’s the whole ‘If God didn’t want us to eat animals, why would He make them out of meat?’ thing.”

“I know! No one can say a damn thing to that either because it’s so, you know, true.”

“Speaking of God, you can also bring up abortion. That either stops things in their tracks or creates completely unreadable threads that go on for hundreds and hundreds of comments and everyone ends up hating one another. Creates an awesome mess. You could do that.”

“I personally like hitting vegans with the double-whammy of abortion and then the fact that they walk on ants or breathe in microscopic life forms.”

“‘What about all the animals killed to grow grains? Huh?’”

“Again, not to reverse-troll, but aren’t they killed to grow the grains that are fed to animals for the most part? I’m just bringing this up because we want to have our story straight -”

“Soy! Switch right then to soy and the dangers of it.”

“Saying, ‘What about soy?!” can net good results. Meaning I’m not sure what but it’s something to say.”

“I know a guy who was vegan and he had to wear a bra.”

“So you’re saying to move the goal posts in your arguments? That’s a common but useful strategy.”

“Yeah, just keep putting up link after link, whether those links are relevant or not, no matter the source. It makes things look legit. Imagine that you’re some hotshot trial lawyer: What about this? And what about this? It’s very intimidating. I’m guessing. And then saying, ‘Did you even read my link?!’”

“Don’t forget that you can also move the goal posts by making it personal.”

“Please give us an example, DingleTingle.”

“Like, ‘I think it’s fine that you’re vegan but it’s the self-righteousness that I have a problem with. Every vegan I know is a smug POS.’ True story.”

“Okay, so I am thinking that now would be the perfect time to back this up with a great anecdote. Could you reinforce it with a story about a vegan you know, DingleTingle.”

“I don’t actually know any vegans. I haven’t left my parent’s basement in two years.”

“Does it matter if you don’t know any vegans? What are you made of, bro? Why should that stop you from making up sh*t about them?”

“Post a link to that sick vegan baby news story.”

“Why do you speak in the caps lock, MsOgyny? You realize how annoying that is, right?”

“I mean, you do want people to at least somewhat pay attention to what you’re saying, right?”

“I guess I’m not clear on your objective here. And what are you ‘LOL-ing’ about anyway?”

“Canine teeth, too. Iron-clad argument there.”

“You can also play on the emotions, like, how you were raised or your background or whatever.”

“I’m going to ignore you at this point, MsOgyny. So, for example, saying that your great-grandfather owned a butcher shop or something?”

“But what does that have to do with you today? Like how can you leverage that?”

“Make it out like vegans are an affront to your ancestry.”

“Oh, so it gets into that personal realm that gets highly charged and is difficult to challenge. Great tactic.”

“Right. And you can get really bent out of shape about it, you know. Keep embellishing things, keep taking things personally.”

“The WiFi here sucks, by the way.”

“Or you could say that you can’t eat most vegetables. Then it becomes a life-or-death situation or discrimination.”

“The ‘refreshments’ here suck, too.”

“What about oysters? Hmm?”

“Don’t be afraid to pull the Hitler card.”

“Someone already said that, bro. I think it was you, in fact.”

“I think we made some progress.”

“You could also bring up amino acids or complementary proteins or something.”

“I didn’t claw my way to the top of the food chain to eat lettuce.”

“Oh, that reminds me: My food poops on your food.”

“DingleTingle, I think your mom wants you.”

“Okay, guys. Let’s call it. Next month’s meeting is "Exploiting Sensitivities About White Male Oppression." See you then.”