The Top 20 Reasons Why a Vegan May Make the Best Roommate You’ll Ever Have... 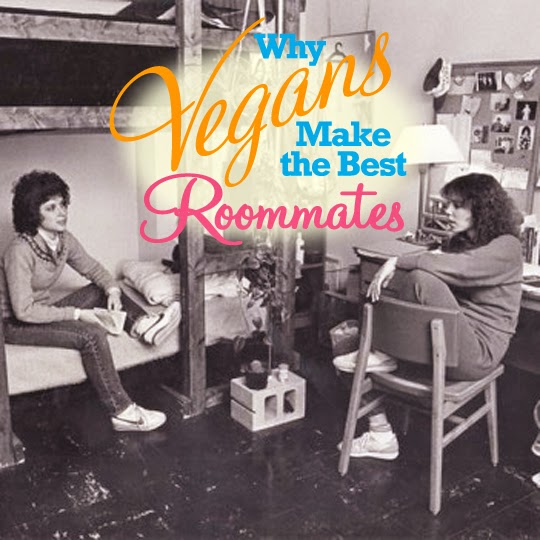 1. We won’t be dating anyone who will ask to store a deer carcass in our freezer.

2. We’ll never ask you to clean up your mess so we can host a snooty wine-and-cheese party. (Our vegan book club, though, yes, please straighten up for that.)

3. We don’t overstay our welcome in the bathroom. We’re in and we’re out. Can you say the same?

4. We keep Jehovah's Witnesses away by insisting that if they want us to read their materials, they will have to agree to read ours.

5. We use cruelty-free cleaning products, so at least you won’t be exposed to carcinogens that way.

6. As we experiment with making our own cashew cheese, you will get to sample the results. (This could be a downside as well.)

7. As a captive audience, you’ll be the first to hear your vegan roommate test out his or her persuasive arguments and/or standup comedy routine. This may be a little like #6, though.

8. You can use “your vegan roommate” as an excuse for why your old friend who is now a competitive hotdog eater can’t stay with you while he’s in town.

9. If our almond milk ever goes bad, it’s not going to require a HazMat team to identify and remove.

10. If you are dating someone who eats meat, there is a reduced likelihood of one of us trying to seduce this individual. He or she is all yours, roomie.

11. Having a vegan roommate means that you’ll have backstage pass to otherwise mysterious treasures like nutritional yeast + popcorn and coconut milk whipped cream, which means that you have access to the oddly addictive gustatory pleasures that fly under the radar of so many omnivorous commoners.

12. You can make jokes about your hippie vegan roommate to fit in better with the bro culture at work.

13. You don’t have to worry about us stealing from your Slim Jim stash. Really.

14. Our likelihood of ruining your weekend by lying around groaning on the couch because of salmonella poisoning is pretty slim.

15. We will pay our rent and bills on time because otherwise we might end up needing to move back in with our parents and have to deal with their kitchens and bizarre rules again and that is the secret panic nips at our heels, makes us wake up in a cold sweat and motivates us to be responsible. So now you know.

16. As vegans, we are survivalists by nature having dealt with inhospitable environments before and many of us are MacGyvers of the kitchen who can create fully respectable meals out of what anyone else would consider incompatible pantry items, an onion and a few stalks of celery. Also, because of our survivalist nature, we tend to horde condiments, grains, beans, vinegars and bulk spices so, as the roommate of a vegan, you should be set with a good stockpile of food for a while after the zombies invade. You won’t want to be around when the nutritional yeast runs out, though, but the world will end then anyway. (Actually, maybe someone should go stock up now.)

17. We just might just have a kick-ass blender. Keep your yucky dairy and egg crud out of it, though.

18. You will probably learn to love dark chocolate - real chocolate - if you don’t already.

19. You won’t have to deal with the freaky folks in the raw goat's milk collective hanging out at your place all the time.

20. Your roommate may be gone for weeks at a time whenever Morrissey tours.