How to Gain Fame and Fortune as an Ex-Vegan in Roughly Five Easy Steps  ... 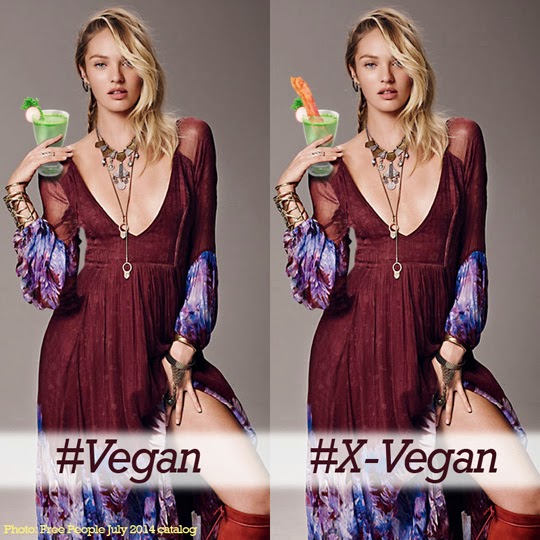 Have you been feeling a little attention starved lately? Do you have a sinking feeling that the social media gravy train is leaving the station and worry because you’re not a celebrity yet? (How did this not happen???) Is your YouTube channel mostly just filled with comments from your mother and the occasional foot fetishist? Has your blog centered around pugs making pithy comments on Mid-Century Modern furniture not resulted in the lucrative book deal you were hoping for yet?

Friend, it may be time for you to learn how you can “go vegan” and then quit it for fame and fortune. I see your confusion: Wait -- what? Really, it’s true. The beauty of this plan is its sheer simplicity and elegant economy: all you need to do is embrace veganism and then dump it like a demanding, high-strung boyfriend who bosses you around all day.  The key to monetizing your putative vegan lifestyle is to have a very public breakup with it that the public will be eager to applaud. I will provide the template of what you need to do but turning it into a profit-making venture is up to you.

1. Go Vegan and Get Fans

Okay, don’t freak out: you don’t really need to go vegan but you should at least leave a photo trail of green smoothies and massaged kale salads on Instagram or wherever.  Think aspirational. Think branding opportunities. Think of a glass of cantaloupe juice in a Ball jar on your balcony ledge with the sun rising behind it. Project your life to the public as if you were the living embodiment of a vision board cut exclusively from Anthropologie and Free People catalogs. Ask yourself, what would Lana Del Rey do if she were a future ex-vegan with a sunnier disposition? Experiment with the most retro-quaint filter you can get on your Instagram (maybe Toaster or 1977) and take pictures of every single thing you eat and drink as long as it’s imbued with virtue. If what you photograph is not aspirational, choose a better filter and embellish with a pretty vintage spoon or embroidered cloth napkin. Get some clouds in the background, maybe some sand, put your feet in the shot once in a while (make sure you’ve had a decent pedicure) and Photoshop some simple words on the pictures. Think metro-meets-retro. Just when you think you’ve added too many hashtags, slap on a few more. If you really want this to pay off for you, ex-vegan, you’ve go to big or go home. Writing in complete sentences is an impediment to getting a lot of fans, which should be your entire objective at this point. Some examples: #raw, #greensmoothie, #kaleaholic, #fallinlovewithyourself, #detox, #juicing, #veganforlife, #ihavenoideawhatimsaying, #blessed, #livingthelife.  At this point, you feel sooooooo great and you should have fans who think you are just phenomenal.

Start out slow but eventually you will need to go really overboard with dietary restrictions that have nothing to do with veganism. The importance of this cannot be overstated. Anything that you can cut out, cut it out. (Or just pretend that you did.) Develop a sudden but intense aversion to nuts, seeds, legumes, grains, oil, sugar, salt, gluten, nightshades, garlic, combining fruits and vegetables, water that isn’t reverse-osmosis filtered, and on and on. Connect it to your veganism even though there are no connections. As far as the viewing public is concerned, your life is still #blessed and you are still #healthyandhappy. (And the foreshadowing strings would commence...NOW.)

At Stage Three, you will still need to commit to at least a couple of months more of your public life as a vegan and it is during this time when you will want to start to falter. Break a nail. Stub your toe. Twist your ankle. Get a stuffy nose. Grow an eyebrow hair that is just too long. In retrospect, you will say that this was all unprecedented and almost certainly linked to your diet because it had never happened before. Meanwhile, keep posting images of your green smoothies with the retro-quaint filter and the aspirational hashtags. #Partoftheprocess. Know that when you start the Fourth Stage, you will need to claim that during the Third Stage, behind the scenes and cloaked in secrecy, you were actually terrified and perhaps even dying of malnutrition and maybe even a chlorophyll-induced psychosis. Your family was scared. Your high-speed blender seemed to have evil intentions. Looking back at Stage Three, be sure to claim that late at night, when you weren’t staring at the ceiling in the clutches of a panic attack brought on by nutritional deficiencies, you had visions of a steak, rare and bloody, dancing through your head. You were so ashamed.

This is where you will begin living as a non-vegan again, though not online yet. Start out by eating cage-free eggs. You will say that they tasted “so good” but also that you “hated yourself.” You will have to claim to notice that this gave you energy again and your period magically reappeared and your ankle stopped being sprained and you just had a sudden glow that people stopped to tell you about. In your break-up letter to veganism in Step Five, you will claim that you couldn’t just stop at eggs and so at this stage, you will put on your sunglasses, wrap a scarf all dramatically but stylishly around your hair (think Sophia Loren in a spy movie circa 1958) and buy some meat at the most adorable farmers market in town, the one where all the farmers are so friendly and kind. You will hide it in your bag - or claim to (again, facts are not all that relevant here) - and eat the chicken or the steak or whatever in secrecy in your apartment. Again, repeat that it tasted “so good” and you “hated yourself” but also that you couldn’t stop yourself. Your story here is that at this point, you started to tell a few trusted friends. They will support your decision, saying that they were so worried about how skinny-obsessive-weird you were getting. With each bite of meat, you will claim to feel less guilty and more relieved.

A. You will claim to talk to others like you, people who lived as vegans but in fact were living a double-life. They were too scared to talk in public about it, though.

B. You will claim that by owning your truth, you will help help liberate others who have been oppressively shackled by the vegan powers that be. Attach this to a hazily articulated feminist-but-not-all-feminist-like-you-don’t-shave belief. Think Beyonce.

Publicly break up with veganism. This is where it starts getting fun. Write a long, melodramatic, nonsensical screed - again, the words don’t really matter - where you say that you are so very scared of the backlash (rest assured that you will, in fact, mostly be told again and again how brave you are) but you need to “listen to your body.” Say that you can now see that you were starving, losing your mind, your family, your friends and your chance to have babies in the future because of this crazy diet. Now instead of being vegan,  you are seeking sanity and farm-fresh eggs, hormone-free meat and dairy. Some key buzzwords/hashtags to hammer again and again: #balance, #listeningtomybody, #balanceisthenewblack, #vegansarebullies, #itsonlyfood, #joy, #wholehealth, #sorrynotsorry. You refuse to be silenced anymore by the vegan mafia. (Act like there really is a vegan mafia after you.)

Okay, how you will now exploit it next is up to you. Shop your story around. Post it to your thousands of fans (you’ve acquired them by now, right?). Say “balance” and “my body told me” again and again for good measure. You can’t say it enough. Remember that 97 - 98% of the population is very comforted by your message. And if Good Morning America and People Magazine don’t come calling? If you don’t get a book deal from a big publishing house for a tell-all about your four harrowing months and near-death experience as a deprived vegan? I don’t know what to tell you. Maybe you can try medical billing from home. Apparently there’s still some money in that.

Thanks for visiting my humble blog. Please visit my website for vegan recipes, tips, interviews, reviews, message gear and much more.
Posted by Marla at 8:23 AM