Finding Sanctuary Within Ourselves...

There’s something about sanctuaries, about being in a safe setting where nothing is demanded of or taken from the inhabitants that just uplifts everyone who experiences it, human and otherwise. Each of us can relax here as our normally highly unjust relationship to other animals has been reconstructed to a more harmonious one. As vegans, we are actively engineering change in the present as well as the future: taking charge of our legacies with our actions of today, fostering liberation on literal and metaphoric levels, radically re-conceptualizing social justice as a deeply personal and engaged practice, not just empty words. This is heady stuff, clearly. Being able to breathe in the air at a sanctuary (it smells like freedom mixed with manure, if you can imagine that), hear the roosters crow, feel the hot, forceful exhalations as a cow snorts down your shoulder, the ideals we stand for have manifested in the real world and all I can think of is one word. Relax... 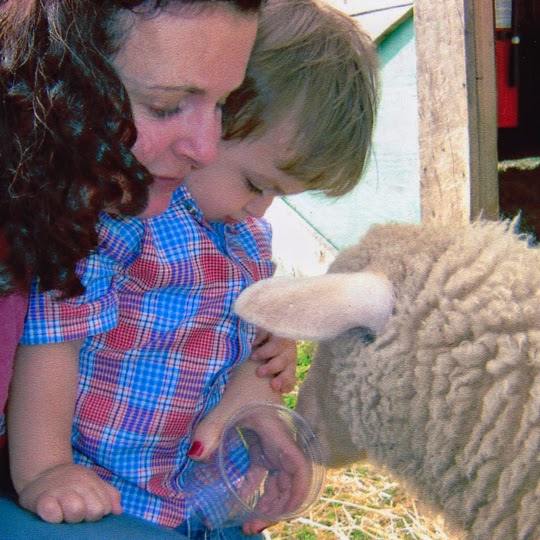 We’ve been going to farmed animal sanctuaries since before my son was born and at least once a year since his birth. At 11 now, visiting a sanctuary is a cherished opportunity for an urban boy to be in the company of the animals he advocates for and to deepen his connection to them, and also a chance to experience them as unique individuals. So often when we think of other animals, we think of them in the aggregate - cows, chickens, pigs, the animals - as if they were one uniform unit, but seeing them face-to-face, sitting in the grass or touching their necks as they take our apples and carrots, we remember that, oh yes, they are distinct from one another. Of course. This cow is very friendly, this goat has an obvious sense of humor, this chicken seems more curious about us. For the day at least, the animals our son meets are no longer flat concepts and just as his dog Romeo doesn’t represent all dogs, the animals he encounters are flesh and blood individuals. They are not abstractions; they are real and three-dimensional.

The first thing our son does as he enters the space at a refuge is take a deep breath. I do the same. Does it feel like we’re home again? In a way, yes, even though neither of us have ever lived in a rural setting. Many vegans I’ve talked to feel the same sense of peace, of safety. Outsiders most of the time, sanctuaries are where we have also found a soft place to land. Even when it is our first time visiting a sanctuary, many of us feel a similar sense of letting go of our defenses, of relaxing, of having nothing we need to steel ourselves against. Spending time at a sanctuary stands in stark contrast to how very much and very often we do have to protect ourselves in the real world: from a co-worker’s rude comments, from family estrangement, from the smell of searing flesh as your neighbor barbecues, from the advertising all around us. Not here. Here we all have found refuge.

Removing ourselves from the equation of exploitation is as freeing to us as it is to the animals whom we no longer exploit. This is part of why we want to shout it from the rooftops: it is so empowering and life-affirming to be liberated from the tragic cycle of habituated violence and oppression.  Some of us are vegans because we truly love the animals (count me as one); others are more driven by a sense of justice, being pretty clear-eyed that “love” is not a motivating factor or something they can identify feeling for the animals. As vegans, we are figuring out what it means to, if not love, than simply allow other beings to be without any demands. As such, it is the most integrated, encompassing and whole of the social justice movements and it is changing the tide of the historical record in real time. We’re doing this thing. We’re doing it.

Last weekend, we were lucky enough to visit SASHA Farm in Manchester, MI, not far from Ann Arbor with our group, the Chicago Vegan Family Network. Here are just some of the residents we met. I hope you enjoy the pictures and that you take the time to visit a sanctuary near you. Better yet, visit and donate. It is so enriching. 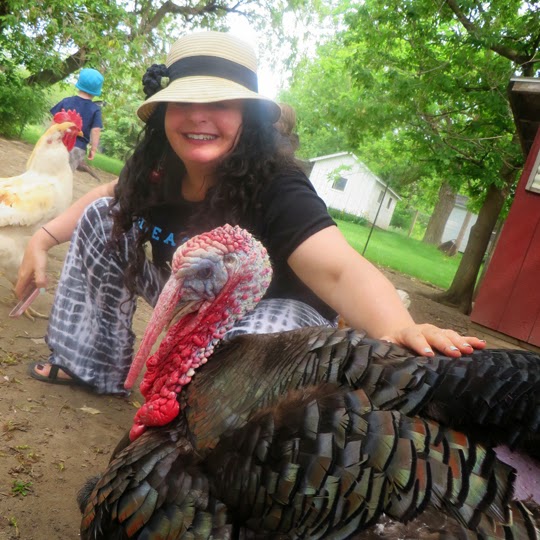 I adore turkeys, such proud and stately birds. The turkeys I have met have all seemed very inquisitive and brave, most have walked right up to me and looked me in the eye. 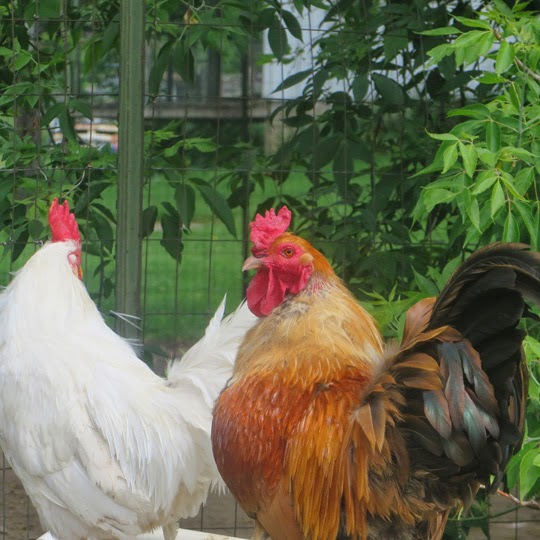 We were told that these rescued hens have combs that flop over because they are nutritionally depleted after years of laying eggs. 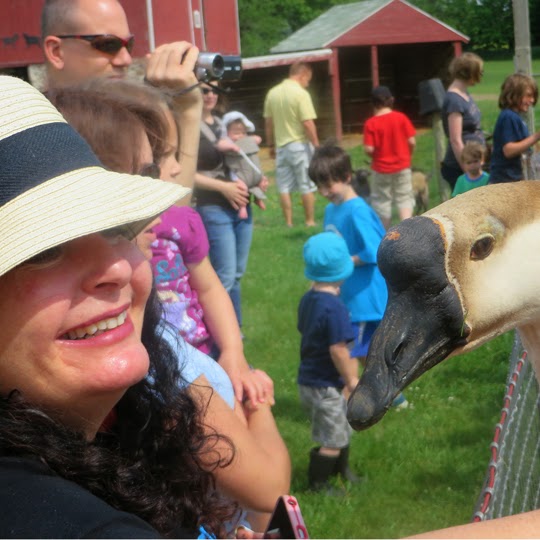 This goose has the softest feathers on his neck. 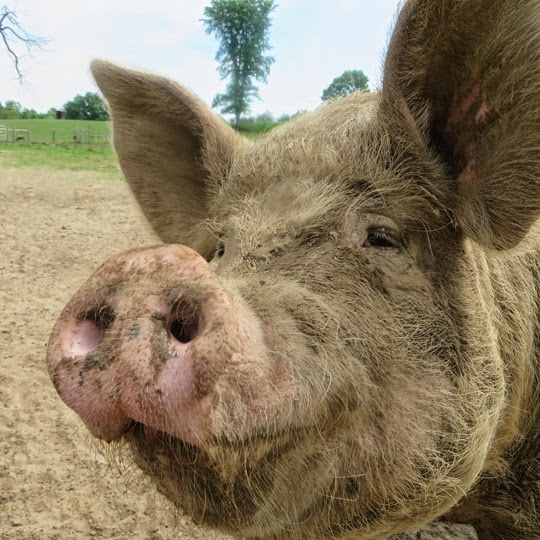 Seeing a pig at a place like Sasha Farm makes you grieve for all pigs who will never have anything resembling a decent life, which is nearly all of them. 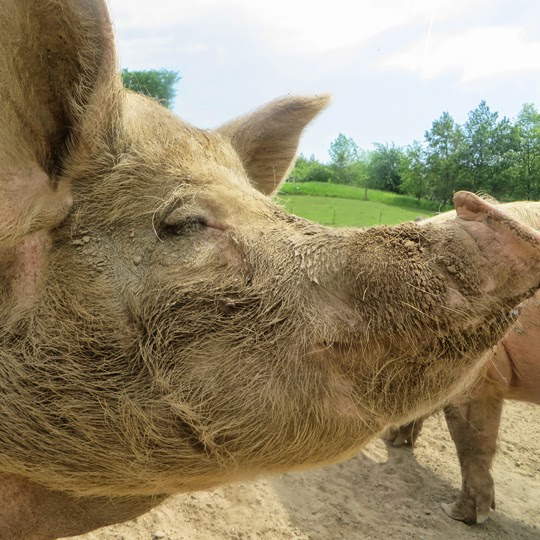 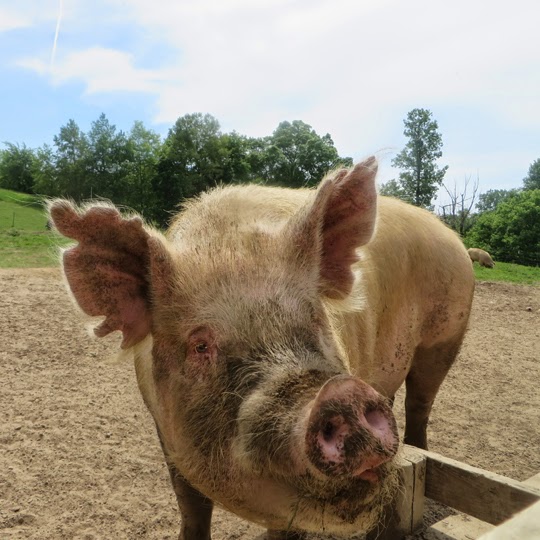 This pig has identification notches in his ears; he was used in laboratory research before finding sanctuary. 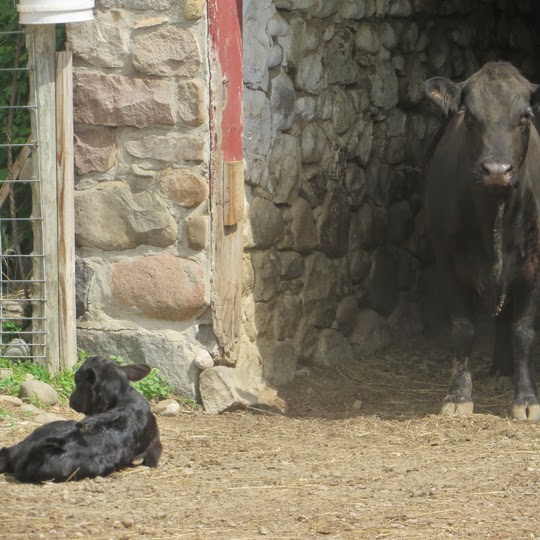 This mother stayed like this the whole time we were there, standing watch over her calf. The mother cow had been rescued from a dairy farm while pregnant and brought to SASHA; the baby is less than a week old. 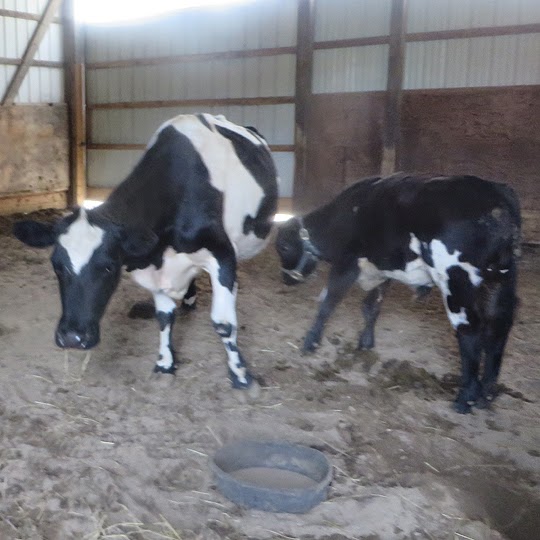 This mother had given birth in December and was still completely protective of her calf, and her calf followed his mother’s every move. You can only imagine the horrific trauma and loss cows and their calves experience when they are permanently separated from one another. 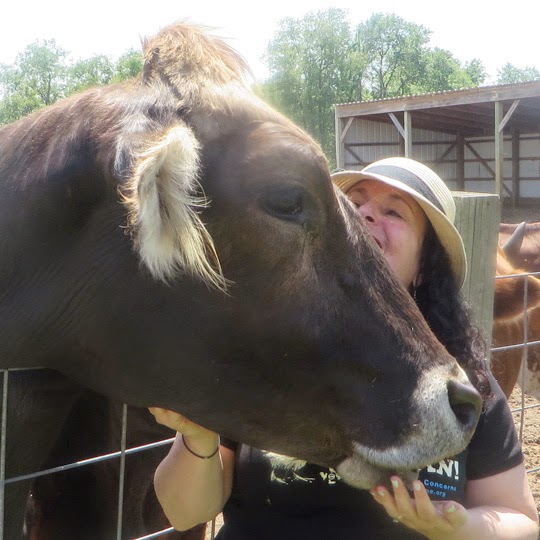 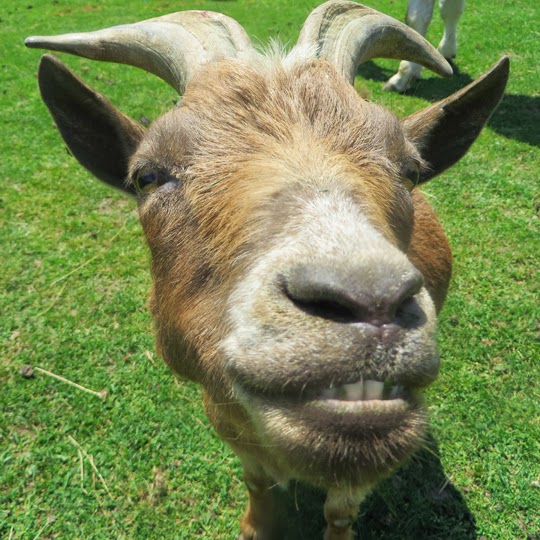 This goat. This goat. I really can’t take it. Uncle. 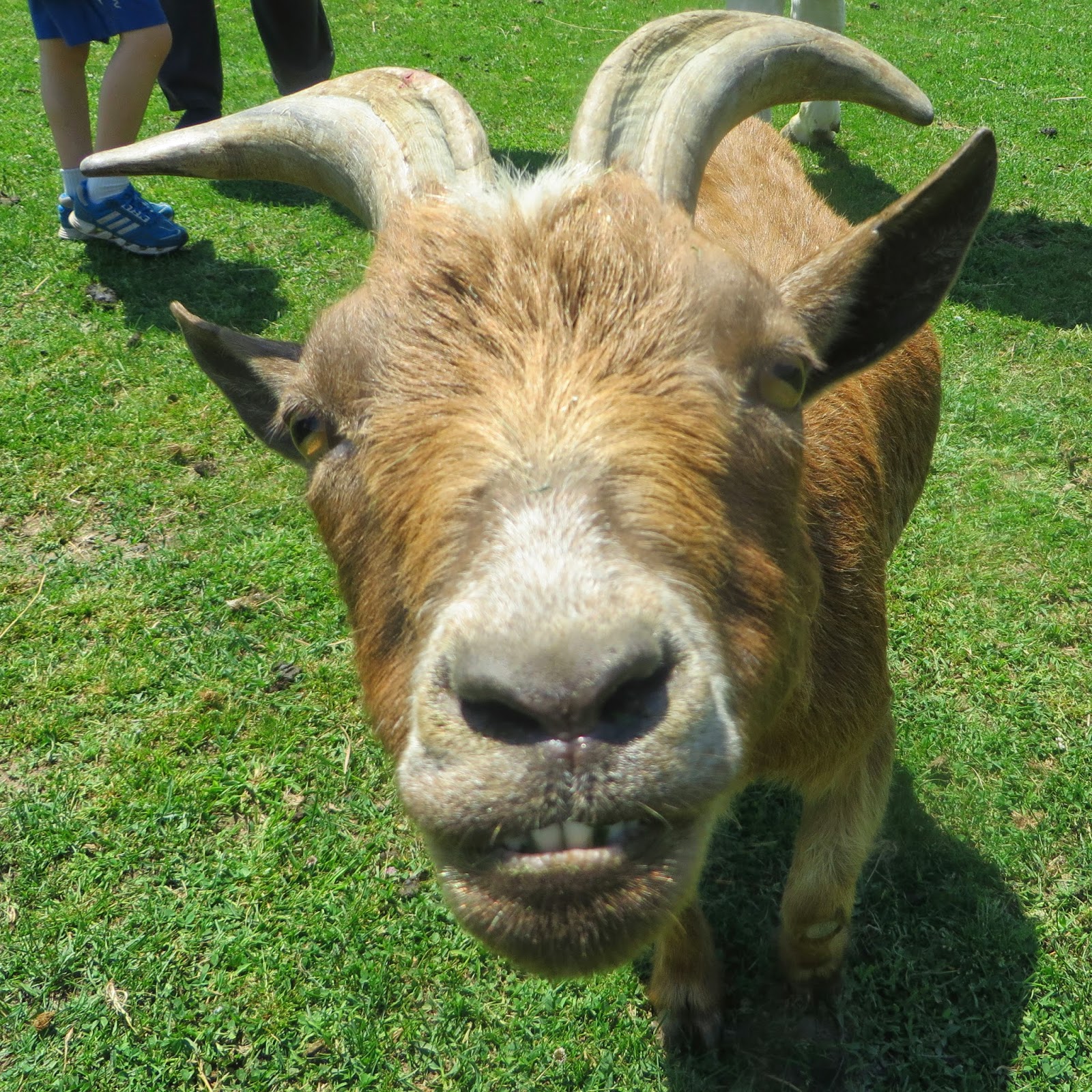 His name is Billy and he followed me around with this big grin on his face as if to say, "Let everyone know how happy I am here." 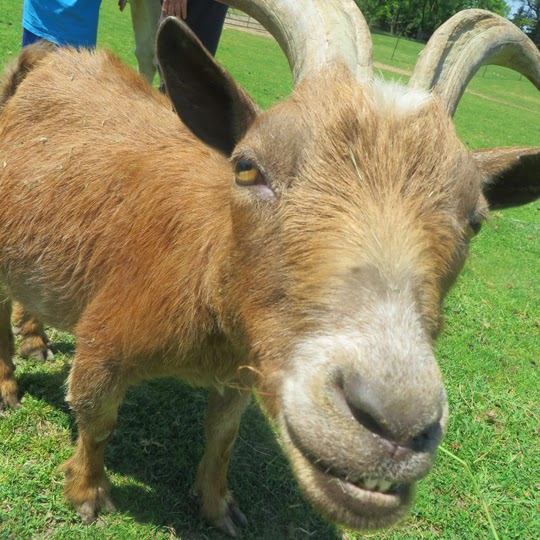 And with a piece of grass sticking out of his mouth as if he wasn't cute enough without it. 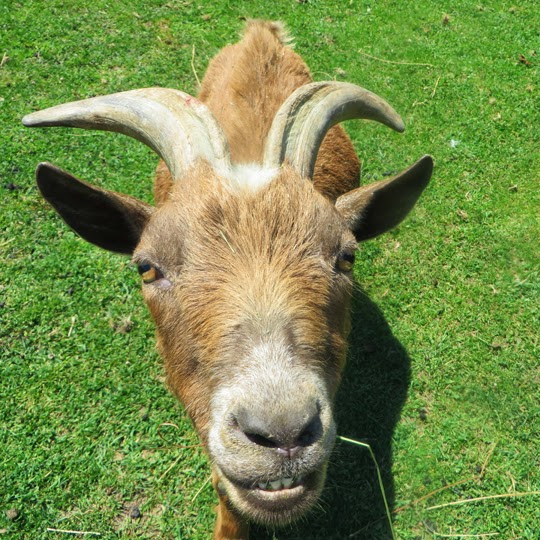 This is a goat and Helen, a dairy cow born with a condition called cerebellar hypoplasia, a brain disorder that resulted in her not being viable for the farm where she would born. Ordinarily, she would have been killed as soon as her disability was identified but, thankfully, she was rescued and brought to SASHA Farm. 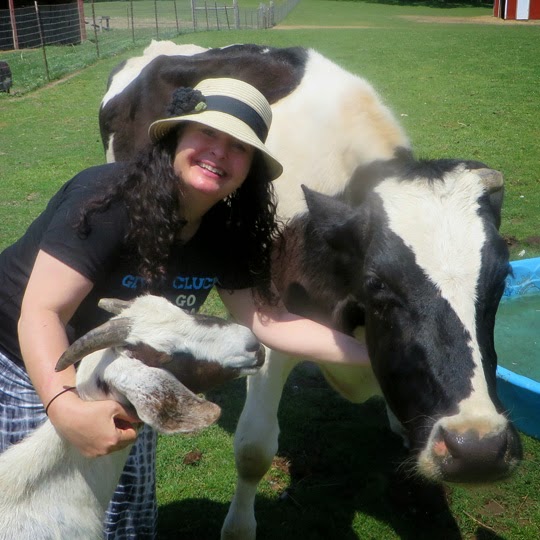 Helen stands and walks with her legs splayed out. She lives with the goats and sheep for her own safety. We stood and talked near Helen for a bit, petted some goats, took some photos, ambled around. We’d been at the sanctuary for a while, though, and the kids were getting tired. We had a long drive ahead of us back to Chicago. We started walking back to the gate when someone said, “Look at Helen!” She was running toward us, her limbs turned out at odd angles, running to us with all she had. She wasn’t done with our attention yet. Her shining spirit -- that invincible, unflagging grit within her challenged body -- was undeniable and so touching.

Living with consistency means that we will always have at least a small sense of sanctuary within ourselves, no longer fighting against what violates our conscience. If we could live perfectly happy, healthy and fulfilled lives without harming others, why wouldn’t we? Right here, right now, we have all that we need to always have a sanctuary within ourselves and stop struggling.