An Open Letter to My Son at Twelve... 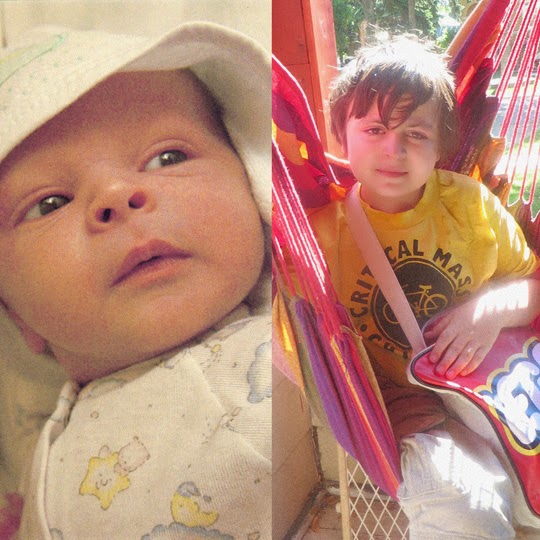 I can’t believe you’re twelve now. Twelve. On each of your birthdays, there is a new age to accept, and I always find it hard but twelve is one year from being a teenager, from angst, from being mortified by any association with me. I realize that I’m on borrowed time here so I’d better say this to you now while you’ll still sort of listen to me.

I wrote the letter below this one to you when you were just a baby. Once the first contractions hit, you and I had a pretty rough time of it and I was fairly wrecked for a while afterward, dealing with hormones that were plummeting and surging and zipping around every which way, plus the searing pain with each breath and the milk that took its time coming in. Oh, and beginning motherhood after a three-day-long emotional roller coaster of sleep deprivation. Fun times. You were here, though, so I had to get it together.

I was really afraid. Terrified. I knew what an incredible gift we had that so many would have loved - a healthy pregnancy; a healthy baby; myself, well, I would recover - and for that I was grateful but as soon as the little endorphin boost dissipated, I was so scared. I’d never been a very anxious person before but apparently another addition came into my life along with you and it was a kind of primal fear I’d never known before. Once I determined that reinstalling you back inside me for a few more weeks until I got it together couldn’t happen, I had to face the inevitable. I had made a mistake.

In the weeks after your birth, I realized that it was the height of arrogance to actually think that Dad and I could pull off this whole being trusted to raise a child thing. We could take care of our dogs, even the one who was more than a little cuckoo. We could create websites and t-shirts and non-profits -- we could even manage monthly potlucks that brought in early edition vegans of every volatile variety as well as the random senior citizens who just wandered in looking for a free meal -- but raise a baby? Just who did we think we were?

What if you came out of the womb screaming for puréed liver? What if you were born with a bacon tattoo? What if your first sentence was, “Um, what about my canine teeth?” Honestly, this is every vegan parent’s worst fear, after the universal stuff that every parent fears has receded or been faced. What if you naturally just did not jibe with us at all? What if what we thought were big, guileless, innocent eyes were actually full of a deep-seated resentment of us and all that we stood for?

It turns out that as a parent, I hit my bottom pretty early. This is not to imply that every parenting moment since has been gold star-worthy but things have improved considerably from those early days of me thinking of you as a (fabulously adorable) ticking time bomb of discontent just waiting to wail for organ meats and Cheese Doodles. It turns out, you were pretty easy, Justice. From your earliest days, you would protect ants from stomping feet and name the slugs near our kale plants. When you were two, you burst out in tears when I read you The Lorax for the first time. This wasn’t forced into you. This was you, beautiful, unguardedly kind you, shining through from the beginning. People like to claim that vegan kids are indoctrinated. It’s actually kind of funny in an ironic way, implying that the kids who do know what they are eating are indoctrinated. In any case, you always intuitively embraced kindness and, well, justice. Your name was more fitting than we could have realized. There was no struggle there: this was you.

Since your earliest days, I have watched you evolve into the most amazing child, boy, person. You are as transfixed by an anthill as you are the solar system, as excited to give a gift as you are to receive it. The world is a much better place with you in it, and I cannot wait to see all the glorious, unique, fascinating contributions you will continue to give us.

It turns out that I had nothing to fear. You were always naturally Justice.

If there was ever a moment when I knew that our lives had changed completely, it was the other day when the three of us were in the bulk section of the grocery store. I was filling a bag with some couscous, and, in our family's little division of labor, your father was putting the code on the twisty-tie for the cashier to ring up. When he reached for the bag, something in his hand caught my eye. Around one of his fingers was your pacifier, worn like you two had just gotten engaged. In a way, you had. I looked at you, six-weeks-old and sleeping snugly in the carrier strapped around your dad's chest, one arm casually draped across him, and I just thought, Wow. Our lives are forever changed.

I know this sounds silly. There have been so many more obvious clues than that that our lives have been slightly altered. Not sleeping more than three hours at a stretch could have been an indicator. The frequent visits to your changing table. The sound of wailing being so omnipresent, I swear sometimes I hear phantom cries even when your father has taken you along on the evening dog walk. All these things may have shouted at me that I have a newborn in the home, but, frankly, I think before the pacifier incident, I was a little too sleep-deprived for it to sink in.

In that seemingly routine moment in the grocery store, though, it was as if the fog around me abruptly lifted and I woke from a dream to find myself as The Mama, improbable as that may seem, that long-haired man as The Daddy and you as Our Baby. Before then, it was as though I was watching some other exhausted, confused couple fumble their way through caring for a newborn, peeking through my fingers as I snickered and winced on the sidelines. At that moment, I finally realized that I'd been snickering and wincing at myself.

Through a joyous, healthy pregnancy and a delivery that was, lamentably, miles away from the alternative-birthing-suite-with-a-midwife-and-classical-music-playing-as-you-effortlessly-descended-into-the-world-an-hour-or-two-after-contractions-began, you have asserted yourself time and again as a passionate, determined young being with your own way of doing things.

In my womb, you entertained us with your calisthenics every morning, flipping joyous cartwheels as you and I enjoyed blueberry smoothies. In the delivery room, you came out punching and kicking 52 hours after contractions began, daring anyone to tell you to settle down. I held off committing to your name until we met, but as I looked at you hot from my womb, red-faced and hollering with your hands balled into tight, tiny fists of righteous indignation, I thought, Well, this is definitely a Justice.

I hope you are not going to think your name is stupid. Will you beg us to change it to Tyler or Jake or Bubba? Will you be creative? Analytical? Sensitive? Brash? A little bit of everything? Will you resent your dad and me for raising you in the city? Will you be enthralled by all the energy, noise and motion?

Maybe you'll forsake your genetic predisposition and be the kind of child who loves to be organized and tidy and balances checkbooks for fun. Maybe you'll sleep in a tent in the living room during the winter, drawing maps and creating an elaborate kingdom in your mind. Maybe you'll fall in love with a girl or a boy one day and know in your heart that no one has ever loved this ardently (but, my child, I must quietly point out that we have...)

The kind of person you are to become is being formed as I write this, as you sleep like an angel straight from Raphael's sketchbook, as you nurse at my breast, as you discover your toes. I enjoy watching you unfold, my baby, with all your quirks and predilections, understanding that you have your own purpose here on earth, just as we all do. I just have one little favor to ask of you. Not too big, I hope.

Promise me you won't ever eat animals. Okay?

I don't mean to be making demands on you so soon, and lord knows I'd rather you decide on your own with all your good sense and natural compassion that eating an animal's carcass is barbaric. And that consuming their secretions and ovum is thievery. And that wearing their skins is unseemly. And paying to watch them perform in aquariums, rodeos, circuses and whatnot is idiocy. If you come to me one day and tell me all this on your own, I promise you a vanilla and chocolate sundae as big as your head, with extra syrup. Dark chocolate, of course. Is it a deal?

You see, despite the poopy diapers and unexpected hair tugs and occasional all-nighters, you are a perfect being born into an imperfect world. I look at you with your huge, glistening eyes and the soft cheeks designed to be nuzzled, and I can't help but see an angel who has decided to touch down for a while and check things out. And the things you'll see, I'm afraid, may disappoint you. I feel like a jerk telling you this, admitting to you with your absolute purity how flawed your fellow race of humans is, especially after how hard you struggled to be here, but it's true. We are flawed. Please forgive us.

We do things sometimes knowing full well that they will hurt another. We pollute and desecrate the only real home we have. We waste our time and money on things that only serve to make us sedated, angry or depressed, and then we do it some more. We do these things despite "knowing better." Yes, me too. We all started out like you, though, full of innocence and curiosity and guilelessness, but somehow, we let the world steal it from us, sometimes while our backs were turned, sometimes with our full encouragement.

In my mind, the act of eating another animal's body - though it is usually an unconscious event, at least at first - is the first time we give tacit approval of this mugging of our better selves. As we grow older, and cynicism settles into our bodies, we accept this cheapening of ourselves with little more than a shrug. I'm asking you, Justice, to not accept this at all, least of all with a shrug.

If I could protect you from all the wounds big and small that we inflict and we receive, I would. But would I be denying you the wisdom that comes from a few scrapes and bruises? Am I standing in your way if I try to protect you from making mistakes? If I don't, am I being a uncaring, negligent mother? Am I creating an irresponsible being? I'm not going to pretend that I have the answers, so we're going to have to navigate our way together.

One thing I do know, though, is that you're a precious, pristine spirit and if you can preserve some of that essence throughout your life, the earth will heave a sigh of relief.

Please, Justice. Hold on fiercely to your beautiful, proud and compassionate self. Please don't eat meat.