Maybe the GMOs Made Me Write This 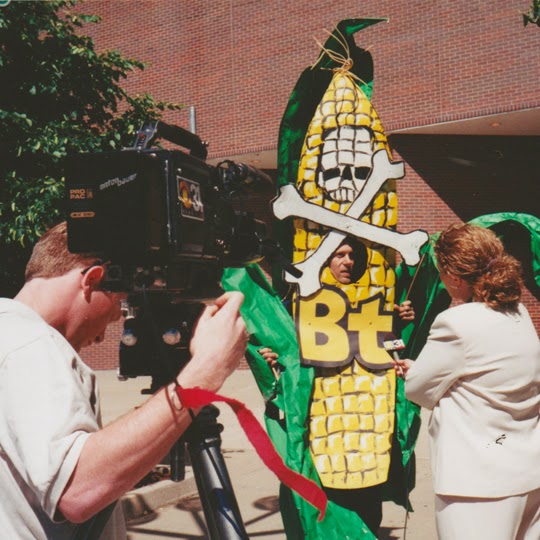 I’m really tired this week. I am normally one of those annoyingly high energy, naturally caffeinated people who functions well on very little sleep. It’s just the way I was made, nothing that I can take credit for, I’m afraid. The past few weeks have been hard, though, and I feel like taking a nap every time I go online. It’s emotional exhaustion that I feel. More than anything, it’s a bone-tiredness that comes from feeling like even the most innocuous things I see people post are subject to hyper-critical and personal attacks.

I often try to imagine how things would look if we talked to one another face-to-face the way people talk to each other on social media platforms and in comment threads. For example, what if I just walked up to someone in a grocery store, poked through the contents of her shopping cart and talked to her like people often do on Facebook? I might say, “Why are you buying bread? Don’t you know what gluten does to your healthy gut bacteria? Destroys it. You’re probably in a mental fog, though, so you wouldn’t know that. You should get the Mercola updates. And what about that frozen corn? Is it organic? If it’s not organic, it’s GMO and if you eat it, you’ve just become a walking toxic dump. Monsanto owns you. I hope you don’t have children. You do? Ah, yes, another stupid breeder. Well, maybe things will work out and they’ll all be infertile. Otherwise, I give up...”

Yet this is exactly how so many people behave online, often around food issues: With shouting, finger pointing, insults and condescension. There seems to be no regard for how people actually need to communicate in order to be heard. I know that I am stating the obvious here but I see this behavior so often I have to wonder if technology has just ushered in another lower level of incivility. We have so much more access to one another now, to perfect strangers from around the world, and what do we choose to say to each other? How do we communicate? So often, we are rude and callous.

It’s my experience that self-appointed food custodians are among the most abrasive. In my case, I am a supporter of organic, local and independent growers and I have been since the 1990s, when my husband and I signed up a members of this novel (to us) endeavor called Community-Supported Agriculture. We were early members of this particular pioneering CSA. This was before the internet, and John and I would huddle together, squinting at the Moosewood-inspired illustrated newsletter that came with every heady box, trying to figure out what to do with escarole. (“Sauté with garlic! Then sip blueberry juice and twirl in the moonlight.”) Before there were marches against Monsanto and so on, my husband and I protested industry conferences, we staged poignant monarch butterfly die-off street theater (one ended up in the Washington Post) and co-founded Chicago’s first anti-biotech group. In fact, deep concerns about biotechnology and corporate domination informed my first novel. So I get it, I really do.

That being said, I have seen all kinds of really outlandish claims about genetically engineered foods on social media, enough to make Area 51 conspiracy theorists look fairly reasonable and measured in comparison. I have seen people speculate that Monsanto was responsible for the September 11th attacks; I have seen every clip-art generated variation of crossbones with ears of corn that could be conceived. Again, I get it. I understand the concerns and I share them. In other words, no one needs to lecture me. Yet I get called out repeatedly by people who seem to believe that all soy that is grown is pulsing with radioactive GMOs and every kernel of corn is embedded with identity-stealing nanotechnology. Why do I get the sense that every time I share a recipe, there is a line of people ready to start tapping as soon as it appears on their screens, eager to scan the ingredients and be the first to out it as a potential source of GMOOOOOOOs?

This is just to ask if we can’t give one another just a little benefit of the doubt. Before you want to edify someone about their toxic diet, perhaps it’s better to take a breath, count to ten and ask yourself how you like to be talked to in life. It’s really not complicated stuff.

So when I say this, I say it with respect and a feeling of kinship: food activists on social media, for the love of all that is good in the world, could you please chill the out? Pretty please? Take some non-irradiated valerian supplements. Cut down on the green matcha lattes. Do something. I say this because not every picture of food that is posted needs to be swiftly identified lest all viewers of said photo risk exposure to a pernicious case of genetically engineered eye cooties and most people don’t like to be talked to like they are complete morons.