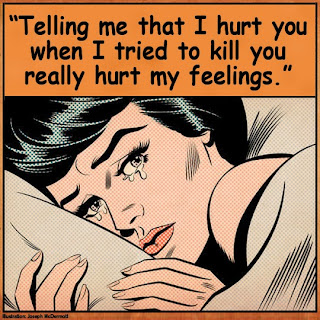 "Truth does not change according to our ability to stomach it." - Flannery O'Connor

We’ve all heard it before: You vegans are just so judgmental. The accusation of judgement can have a potent silencing effect, one that I have seen effectively employed countless times. How can we express what is happening to animals and what is happening to our planet in honest, plain terms without raising the hackles of those who feel judged when many are going to feel that way regardless of our messaging due to their own complicity? That is a deeper question of strategy to tackle another day, but for now, I will just focus on one aspect of this issue that we face and rhetorically ask again what I have been rhetorically asking for years: which is the greater crime, to “judge” or to continue the habits that cause actual harm, suffering and death?

If I were to shout to get the attention of someone who is about to open a car door on me while I am on my bike, should I risk sounding judgmental? If I were ask my neighbor to please not toss litter in my yard, would that be overly judgmental? If I were to tell someone who is mistreating me that cruelty is not acceptable, would that be too judgmental? What about on a much larger scale, where so many feeling beings are brutally, fatally punished for being born in a form other than human, and where the cost of our collective demand for their “product” is irreversible harm to our planet and the lives of future generations? Is it okay to point this out? Does it matter if egos are bruised in the process?

To me, the answer is clear. We need to be smart and effective with our communications but we should not allow ourselves to be silenced simply because speaking truthfully makes someone uncomfortable. In this case, when we are told to maintain a lie because speaking honestly upsets the ones causing the damage, we are asked to maintain a code of silence around harm and that is always an abusive power structure.

I have some experience with this.

I was raised in a home where the elephant in the room was never addressed. The elephant was usually drunk. The elephant tossed over tables, raged at us and behaved as if no one else mattered but we had to pretend not to see what we saw. In short, he created a terrifying environment that we were expected to adjust ourselves to somehow. Instead of being allowed to acknowledge his damaging behavior, the message I got was that speaking about what was plainly obvious was a flagrant violation of an unspoken but obvious rule in the house. As this behavior worsened, we were pressured into taking turns at assuming blame. We were expected to tiptoe around what was glaringly apparent to avoid “provoking” more behavior of the same. The very worst offense was to speak of it with candor. Having escaped that environment, I have a very low threshold for being pressured into maintaining appearances for the sake of not upsetting anyone.

At a certain point, we need to step aside from that egotistical lens and be able to look at things from a bigger, more inclusive framework. If my skin is so thin that I cannot even hear of anything that undermines what I see as my place in the world, that is the narcissistic mentality of an abuser. A deeply pervasive message we get in society reinforces such self-centeredness, maintaining that animals are for us use we wish and to speak of it in ethical terms is to violate a tacit arrangement, one in which we’ve conveniently been rendered unimpeachable. This is not to say that I believe that people who eat animals are abusers because I don’t think that - the intentionality is very different. However, that abusive power dynamic comes into play when people don’t want the existing structure challenged, questioned or sometimes even mentioned. When this happens, I am reminded of the unfairness of being asked to be complicit in a lie. I am reminded of being a girl and seeing what was plainly obvious but being forbidden to speak honestly of it or risk hurting someone’s pride. Again, I am not saying that people who consume animals are abusers, I am saying that the power structure of telling someone not to speak of what she sees is an abusive one. There are greater wrongs in the world than bruising an ego.

When we find ourselves holding back and not speaking our truth because it might offend someone’s sensibilities, we have to really examine what we have agreed to do: we have agreed to play a part in a charade, in a dance of denial, and the consequences are devastating to us personally and to the future of the world. I have observed the silencing ripple effect this fear of sounding judgmental has on people and it is eerily familiar. There are certain things we need to admit to and one is that killing others for unnecessary and temporary pleasures is not consistent with our highest values of compassion and justice. Should we pretend that it is in order to protect someone’s ego? Billions of animals are brutalized every year in the most unfathomably cruel ways and our habits are also leading to ecological disaster, yet it’s frowned upon for us to be so “judgmental” as to point this out? I refuse to participate in this delusion and believe that asking someone to do this is the perpetuation of an abusive dynamic. I opt out.
Posted by Marla at 8:48 AM