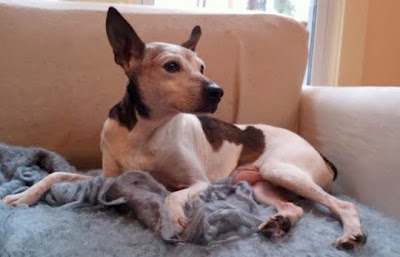 Over the weekend, I saw the most recent Lord of the Rings film with my guys. I pretty much feel like the world’s most long-suffering, persecuted martyr each time one of these Hobbit Ring things is released (soooo many times and, true story, I even chewed some scenery as Gollum in my camp play but it’s still unmitigated torture to me). I try to hide my disdain for the sake of my son, who cannot imagine anything involving dragons, battle scenes and highly improbable near-death experiences right before even more improbable escape sequences to be anything but cinema at its finest. (He’s an 11-year-old boy, it makes sense.) This is probably my own shortcoming, but there is something about special effects that annoys me and something about Middle Earth that reminds me of a Renaissance Faire with a bigger budget and fewer drunk guys in codpieces puking behind ye olde backdrops. But I do it because it’s something for the family to do together and it’s the holiday season and I don’t want to be dismissive of what my son enjoys and he’s gone to more than a few things with me (craft fairs!) that have probably bored him to tears. Still, sitting there in the movie theater, between creating sarcastic dialogue in my mind and nabbing a short, British Isles-accented nap, it was hard to not keep returning to thoughts of this guy pictured below. He was safe at our home after his own harrowing journey. 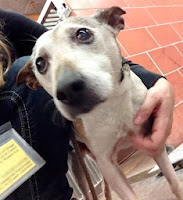 His name was Money when I first learned of him. He appeared in my Facebook feed Wednesday night and his picture gripped me right away. He was a 15-year-old unneutered dog surrendered by his human to a hell for animals in Chicago: Animal Care and Control. No reason was given for his surrender, none was needed, he was just let go. Unwanted. He had possibly the saddest, most scared eyes I have ever seen. Those eyes seared into me on a visceral level, seemed to be looking right at me, made my whole body react. I shared his photo and within minutes, a plan had come together. From the first person who took his photo, to the people who shared it, to the friend who helped to grease the wheels for his quick release, to another friend (the lovely Little Fox, Ashlee Piper) who would help with his eventual placement, we devised that my family would foster Money and he would be out of there. Within minutes, we created a chain of support that would bring this very vulnerable boy to safety, like a team of bodies linking arms and pulling up someone from the crevice of an abyss. Each of us alone might not have been able to rescue him but all of us together, with just a little effort, could. By Thursday night, less than 24 hours after sharing his photo, we were able to pick him up. 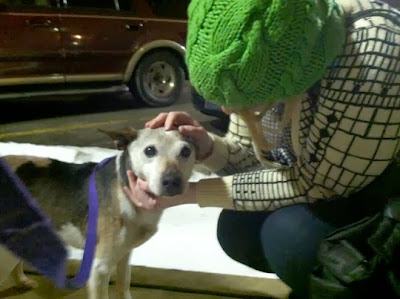 He is now named Monty (from me) Sprinkles (from Ashlee). He is hard of hearing and can’t see well. He had one of the worst odors I have ever inhaled, like he was doused in a month’s worth of urine. He got right into my car, though, without the need for any coaxing. He came into our home, ate his bowl of food, went for a walk (he doesn’t know how to walk on a leash) and got a bath that he really did not appreciate but we did very much. He also met the other animals, shoving his nose indelicately into private doggie parts and he slept through the night on a blanket that he pushed around into a nest with his skinny little paws. In the morning when I came downstairs, so worried that he wouldn’t adjust, that the cat would eviscerate him, that we would be outed as foster failures, Monty greeted me with a tiny wag from his docked tail. He may have never known kindness, he was just given up like a piece of unwanted furniture, and despite this, he still wagged when he saw me. I sat on the floor with him and my dandelion tea and he placed his greying muzzle in my hand, turning it to get the best scratching angles. His cloudy eyes were wary but they still met mine despite the disappointments and the reasons to be suspicious. I sat on the floor with him for two hours that morning, kissing and scratching that wizened face and unexpectedly velvety neck. He was so tender. 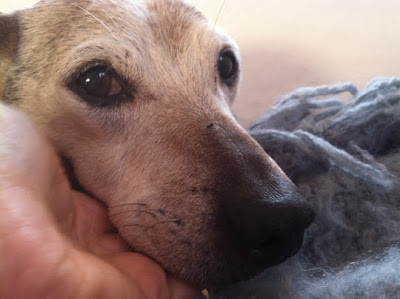 This is how it always happens when I adopt and apparently also when I foster. I fall in love. Whenever I’m not with them, they are all I can think about at first. I race home to be near them, smile at the thought of them, find myself wondering if she would like this toy, if he would like to visit this park. It is always a matter of my heart bursting with embarrassing purple prose, skipping to a new rhythm, fully embracing a kindred spirit I didn’t know even a day or two before but can’t imagine living without.

It alters us for the better. 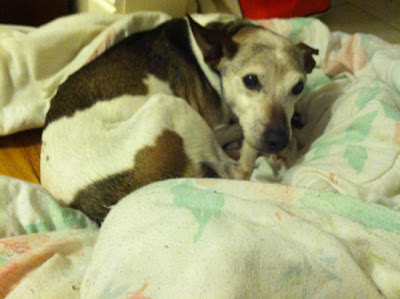 So while I was sitting in that theater, bored silly by the elves and screaming intensity and swords and stage blood, I drifted away and thought of Monty, as I often do these days. This dog has seen a lot in his long life. He has been most likely treated as an thing to reproduce and earn money and his worth was based on that. But now here he was, sleeping in our home, sighing in his sleep, accepting our affection - yes, cautiously at first but then seeking it out - claiming the new life that I can only presume is a world apart from how he had lived even a few days before. Adapting to it, thriving in it, completely and gracefully transforming because of it. In just one night, those ears, once behind his head, stood confidently up. His tail came out from being tucked under and wagged. His eyes - frightened and suspicious from a lifetime of what he saw - now had a different quality, a different spark: one of release, of trust. In just one night, he had begun a remarkable transformation of the spirit, the kind it might take a person years to accomplish, if ever. 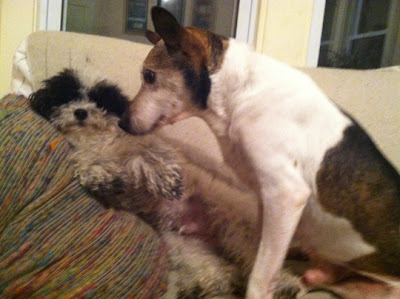 Is Monty’s transformation any less of a hero’s journey than Bilbo Baggins’s because he wasn’t threatened by Orcs and deadly dragons? Maybe he didn’t outrun fireballs and manage to survive a column collapsing on him, but what he did endure and survive was every bit as threatening to his well-being. He came out on the other side, too, scarred and shaken but still believing in his innate self-worth enough to graciously accept it when his new life arrived. He is sleeping on the couch now as if this has always been his comfortable life because dogs are amazingly adaptive beings who live in the moment but also because he has arrived at a place of trust and acceptance. Why do our stories have to be so convoluted and out of reach? Can’t a hero’s story be this quietly brave, loving and tender? Can’t an inspiring story be within reach but every bit as audacious and inspiring as the fantasies we construct? I also think that learning to trust is as courageous as anything we do.  This dog, this being who has been treated like an object and discarded when he was no longer useful, can forgive and trust. He will nudge my hand with his sweet snout to keep me from writing because he wants my affection. That is heroic, too. 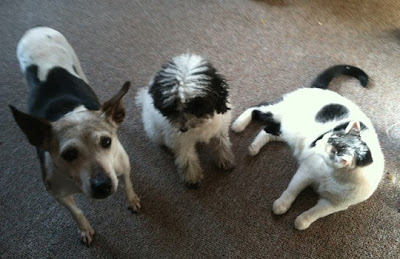 I dedicate this piece to Monty, a boy who has taught me again and again in his short time in my life that transformation is so complex and yet so accessible; it involves communities and our own tenacity of spirit. Monty will be going to his rest-of-his-life home soon where he will live out his days in contentment and love. Our home will be open again for fosters (yes, it will, John). He has touched a place in my heart forever, though. You are a hero, Monty. Thank you for letting me be a part of your journey. You don’t need sword battles and pyrotechnics. You are as brave and as bold as they come. 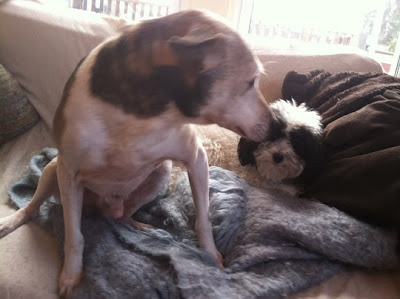