You aren't vegan because I said so, damn it! More adventures in self-absorption and losing our priorities... 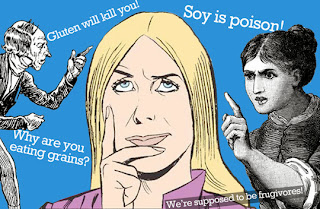 In recent years, I’ve learned that I am not vegan.

This took me by surprise the first time I was alerted to my wayward habits but I’ve since grown accustomed to it. First, I learned that I was no longer vegan when was expecting my son. In the years that have followed, I’ve been informed that I’m also not vegan because I shop at a certain grocery store chain, because I am not a fruitarian, and because I vote. I am not the only “not really vegan vegan.” There are apparently a lot of misguided people who unknowingly but flagrantly violate the vegan code of conduct all the time. Thank goodness there is a veritable army of people with far more consistent conduct ready and waiting to call us on every single perceived violation. This time it’s not the omnivores poised at the ready to yell “gotcha” at us, though. More and more these days, the angry crowd of critics may consist of our fellow vegans.

One recent example still has me shaking my head: my husband and I were reprimanded for including soy and wheat as examples of animal-free protein. They weren’t unhinged Weston Price Foundation followers leading the charge this time: the ones attacking us were other vegans. In the dust-up over soy and wheat that ensued, I was accused of trying to get the world hooked on Twinkies (?) and also having an agenda to get everyone I’m in contact with dependent on harmful medications (?!). Ignoring the fact that we weren’t recommending any foods but were simply stating that these are examples of plant foods that contain protein, I was derided for even acknowledging that they exist. Why? Well, according to these self-appointed guardians of All Things Correct, soy and wheat are bad for us and thus if you are suggesting them as protein options, you are giving your tacit approval of cruelty to animals - human animals - and that is terrifyingly Not Vegan. Underneath it all, the reasoning is something like the following: I don’t like X so I will stretch and warp the meaning of the word vegan to have my thoughts about X fit into the interpretation I prefer. Over the years, I have also heard it claimed that caffeine isn’t vegan, grains aren’t vegan, olive oil isn’t vegan, salt isn’t vegan, and so on. I have long been aware of a certain subset of herbivores who might only be content if we live in a separatist society and eat only the select seasonal plums that were blessed by mountain-top dwelling vegan monks; there will always be the people who want to add more rules and make veganism more restrictive, cliquish and exclusive. This is nothing new. What is new is that social media has exacerbated what was already problematic with the instant commentary and information overload.

As you can see, attaching our own attitudes about things unrelated to veganism is a slippery slope and takes us very far afield from its core foundation, which is rooted in beliefs about justice, equality and compassion, plunging us into a realm of personal opinion and arbitrariness, a place where our principles become more and more blunted to the point of meaningless. This deeply undermines veganism and reframes what was potent and persuasive as belonging in a murky place of subjective preferences. As vegans, we are asking people to reevaluate their place in the world; we are asking people to see other beings as worthy of equal consideration. This is pretty serious, challenging stuff for the average person to process, let alone integrate: is it a smart strategy to attach an amendment to this, also naming gluten, soy, sugar, dirty snow, the smell of gingko trees and whatever else displeases us to be included as Not Vegan? We are going to ask the public, many of whom already think that we are impossible-to-please and confusing, to not only consider giving up meat, dairy, eggs and honey but also include our various personal preferences under the umbrella of veganism? We are going to take something that is rooted in the ethics of non-violence and attach an anti-gluten component to it? Really???

If veganism is that subjective and personal, here is my list of what isn’t vegan. If you don’t like this list, well, screw you. You were never really vegan. Carnist.

As we can see, the things that irk and even offend us may indeed be irksome and offensive things (and maybe just to us) but that doesn’t make them not vegan.

By all means, people are welcome to have their own convictions on how to live; I certainly do. We must consistently draw the line, though, at conflating our own preferences about this or that with veganism. The more we try to conflate these two often disparate things, the more confusing, remote and inaccessible veganism becomes to the very people we most need to reach. So the next time another vegan criticizes you for anything not directly related to your veganism, I think it is fair to remind that person that you aren’t pretending to live according to his or her rulebook. You are vegan because it’s the right thing to do, because you love the way you feel, because it’s a powerful, thoughtful and meaningful way to make a difference in the world. This other stuff they are attaching to veganism doesn’t belong there.
Posted by Marla at 8:51 AM