Some things that have really, honestly been said to me as a vegan and, yeah, with a straight face. 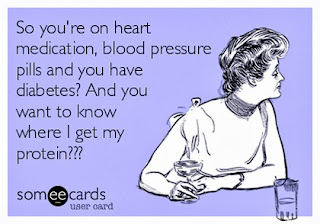 Basically, this can all be summed up as “Why vegans are nutty.”

After my interview on Chicago Public Radio (so, yeah, I’m exploiting this thing for all it’s worth), a bunch of people asked me how I stayed poised when asked about “freeganism” and eating dead deer. How did I remain unruffled? Well, here's the thing: I’ve been tabling and promoting veganism since 1995. In other words, I have probably heard just about everything. If you want a really great opportunity to hone your vegan craft, talking to the public will do it.  You don’t even have to do that, though, because if you are a known vegan, the strange inquiries and statements will come to you, regardless.

This is just a collection of some random thoughts, questions, free associations and bizarre assertions made to me over the years. I’m guessing that no one was on acid at the time but I can’t be positive of that. What do you hear a lot? Feel free to add some of your own favorites in the comments.

“You care more about animals than people.”

“What about the homeless?”

“What about the children?”

“What about the homeless children?”

“I went vegan for two weeks and my skin turned green and all my hair fell out.”
You turned into this? That’s kind of awesome. Because if you’re an alien, maybe we actually will succeed in invading the planet and taking everything over more easily.

“Where do you get your vitamins?”
From fruits, vegetables, grains, legumes, nuts and seeds. And you?

"If we didn't eat the animals, they would take over the world."
So that whole supply and demand thing doesn't apply? You are the front line that stands between us being ruthlessly overrun and dominated by chickens and cows? Thank you for your sacrifice as you plow through McNuggets and burgers. You efforts are truly heroic.

“What about your jeans? Cotton comes from sheep.”
Spoken by a Ringling Brothers Circus employee, who also claimed that elephants stood on their heads “in nature” to frighten predators.

“Your shoes are leather.”
I was wearing Converse All-Stars at the time. So yeah...

“My daughter’s a vegetarian, but she’s not vegan, thank God.”
Yes, that would just be awful.

“Cow produce milk spontaneously, without even needing to be pregnant.”

“You know, cows need to be milked for humane reasons or their udders will explode. I’ve seen it happen.”
Both statements were made to me by someone whose complete authority on the subject hinged on the fact that she was “from Wisconsin.” On a clear night, the exploding udders can be seen all the way into Chicago. I must have missed it.

“Soy turns boys into girls.”
It’s more affordable than sex reassignment surgery and hormones, so what is the problem? Oh, yeah: you might also want to give up dairy if estrogen concerns you. Yes, even “hormone-free” dairy has the hormones of the mother cow.

“Soy is killing our planet!”
Then, yeah, you might want to stop eating farmed animals, the biggest source of soy consumption by far.

“Animals don’t have souls.”
So, putting aside the unprovable, subjective construct of the soul, eating an animal without a so-called soul is evidence that you have one?

“My totem animal is a tiger and my tiger needs meat.”
???

“The Dalai Lama eats meat and by eating the flesh, he helps the animals on their karmic journey so they can come back as good people.”
I bet the animals are very grateful for his noble sacrifice, using his body as a vessel for karmic passage. I am dazzled by your spirituality...

“I only eat happy cows.”
When were they most happy? When their babies were taken away? When they were trucked to the slaughterhouse? When a rod was shot into their brains? When their throats were slashed?

“Milk and eggs are the animals‘ rent for us taking care of them.”
Right, because they are really taking advantage of our generosity and benevolence.

“I tried to give up meat when I was a vegetarian, but I was ‘too floaty’ and I needed meat to be grounded.”
You can’t argue with science.

"My body told me it was time to eat meat again."
Was that your elbow? Or your knees? Was the voice squeaky? Confident? Most important, how long have you been hearing voices?

“I was a vegetarian but then I had a baby and I didn’t want to force my views on anyone.”
Because parents who take their children to church or raise them as atheists, enroll them in school and teach them not to take what doesn’t belong to them aren’t forcing any beliefs on their children, right?

“I’m not vegan, but my next door neighbor’s nephew’s girlfriend’s best friend was vegan and she got really sick from organ failure. Now she eats meat and she’s recovered.”
Again, sounds very legitimate.

“I’d be a vegetarian but you have to be really careful about balancing your amino acids every time you eat or you will die.”
I crunch numbers like no one’s business before I eat or I am likely to collapse on the table and suffocate in my quinoa. I don’t know what I’d do without my Mega-2000 Amino Acids Calculator.

“What about the vegetables? Plants feel pain.”
Sigh...I know. Every time I take down my kale for the winter, part of my spirit dies, too.

“I can’t be a vegan because my blood type is O+.”
Said to two longtime O+ vegans.

“God said it was okay.”
And on the seventh day, in His great benevolence, God said: Go forth and eateth, weareth, and enjoyeth the creatures I have imbued with sentience in any manner you conceiveth, o, soul-possessing child of God. And so it shall be. Now smite that swine and passeth the bacon! Go forth and createth more fecal lagoons! Destroy this home I have created for you as you wish.

So, yes, you can see that I am sarcastic. These thoughts run through my head but then I have my straight answers because I know that when most people say these things, they don’t realize how it sounds to us. This is just one part of the cognitive dissonance of being vegan in this world and having to adapt to it. And this is also why vegans are nutty. By the way, where do you get your protein?