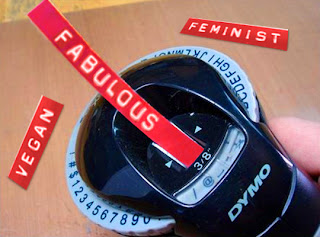 Some people really hate labels. I am not one of those people.   I know that I should shun labels. I am an open-minded, artistic, rebellious type. (Oh wait, those are actually more labels.) But labels are for cans of soup, right? On the surface, yes, but on a level  deeper than that, labels can actually help people to flesh out what was once two-dimensional and inaccessible to them. If you are “out” as someone who identifies with certain so-called labels, it helps those who meet you to understand the richness and complexities of human nature more, not less, and actually see you in a much more expansive way than it would seem that a label would allow.

At a university surrounded by cornfields, I was happy and honored to be able to embrace the label of feminist. Why wouldn’t I be? Feminists were powerful and independent and not taking any nonsense from anyone. It wasn’t long, though, before I learned that it was not so cut-and-dried for the many other young women who made it crystal clear that they did not self-identify as feminists. Even if they were going to college to develop marketable skills and knowledge for professional careers upon graduation, or as a stepping stone to the advanced degrees denied their female forebears, they weren’t feminists, no way, no how. In talking with people, what I learned was largely that they had conflicts with the image and perception of what they thought it meant to be a feminist. To many who disassociated themselves from feminism, it often seemed motivated by a conflict between the image of themselves they were trying to project and feminism.

The same outdated notions prevalent in 1970 were still alarmingly entrenched in 1990. This was what I learned: Feminists don’t shave. Feminists hate men. Feminists don’t wear bras. Feminists are ugly. Sadly, in 2013, all these years later, there is still such a powerful grip the negative associations of feminism has on the word that many women continue to reject the word even as they personally benefit from the advances early feminists fought for years before. In thinking about it, I have to conclude that the universal cultural pressure to be considered attractive might be as powerfully motivating as they come.

Over the years, I have noticed a growing reticence around the word “vegan” by my fellow herbivores and it also seems to be largely motivated by some similar negative perceptions the dominant culture has attached to us. Vegans are angry. Vegans are busybodies. Vegans are judgmental. Vegans hate people. It’s disappointing to me, as someone who is a proud vegan, to see so many who could be out there creating positive change and challenging perceptions in the world remove their association with the word altogether. I fear that feminism is so full of baggage at this point that I don’t know if we’ll ever rid ourselves of the negative associations attached to it, and I don’t want to see the same thing happen to veganism.

I embrace the label “vegan” partly because I am so very grateful to be living at a time and in a place where I can live by my values. This is an extraordinary privilege and it is unique to our age. In embracing the label, we humanize it and then, paradoxically, it becomes less of a label and more of a simple descriptor. If we can live as complex, individual, dynamic and creative vegans, we take the one-size-fits-all label off of us and we create something altogether new and real out of it. This more fleshed out understanding of who vegans are then flows out when we interact in the world so the public will have a more complete understanding, which will help them to reject the shallow clichés that have been tacked onto us. Further, when we take an active role in broaden the public perception of veganism, the people we interact with can begin to imagine themselves as vegans.

I believe that we need to own the language and, yes, the label, because through that, we will expand perceptions and I believe that this will ultimately ripple out to have a positive net effect for the animals. We can’t give up the messaging around veganism to those who barely understand it or want to see it fail: we need to be out there as individuals, showing the world what it means to us to live as vegans. Our beliefs about equality and justice spring from something much richer and more deep than the lazy cultural identifiers the people who don’t understand veganism assign to it so we need to own the word. Allowing others to define who we are will be our ruin and it will ultimately lead to the continued dismissal of the vegan message.

So here is my challenge to you if you don’t like the public perception of veganism: Practice owning the word. Be an out and proud and unapologetically fabulous vegan. Society being able to see us - as artists, entrepreneurs, students, grandparents, scientists, activists, neighbors and everything in between - as unique representatives of veganism is what is going to be the game changer here.