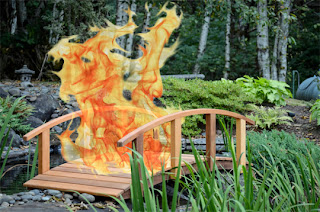 Last week, I had the amazing opportunity to be on Chicago’s Public Radio station in promotion of Chicago VeganMania. The person who invited me is someone who is pretty well-known in “foodie” circles in the area for her championing of locally-raised, smaller-scale animal products and flesh. She is someone who, frankly, has offended me over the years because of my core disagreement with using animals toward our own ends, and, even more dagger-like to my heart, allowing affluent consumers to snag a green halo for themselves while eating “humane” this and “grass-fed” that. Even a casual reader of this blog will know how very dishonest I find this mentality of so-called compassionate consumption to be: I am on record for that, nothing to hide there. For every essay, though, I’ve also composed a million really incendiary messages in my mind and never actually written. I have to wonder, What if I had burned that bridge that would ultimately allow me to be talking about veganism to lots and lots of people on Chicago Public Radio? If my name were associated with slash-and-burn personal attacks, I likely wouldn’t have been able to get my foot in the door and isn’t that essential to reaching others?

A few years ago, I was describing a disagreement I was having with someone to a friend and she asked me a rhetorical questions that has stuck with me ever since: Is it more important to be right, or is it more important to be heard? For someone like me, someone who feels an almost compulsive need to get the last word and win every argument, it wasn’t a rhetorical question. I honestly had to answer that I preferred to be right. Her framing of this struck a nerve, though, and I have thought about it again and again. When we cling to this notion of proving our opponents wrong and running victory laps around them, we risk “winning” damaging pyrrhic victories as opposed to anything meaningful and worthwhile. If the ego is pushing us to tell someone off, it could very well come at the expense of being heard. If we are not heard because, as messengers, we are so lacking in basic people skills, we have shot ourselves in the feet. The animals are the ones who pay the price if people close themselves off to what could be a very compelling message. Character assassination probably won’t work so we need a better strategy to get through to people.

We can express our disagreement with someone without trying to also annihilate that person. If the intention is to prove someone wrong, that is one thing, but if the intention is to prove wrong and humiliate him or her, you will have likely closed any doors you have to a decent, engaged dialogue and potential growth. A key to communication has to be honesty, though. Sometimes we have painful truths to tell and there is no way getting around offending people. It is simply a fact of life that if someone wants to be offended by you speaking honestly about what you see and feel, you can’t control that. It is not our job to reassure and absolve people who are harming others, pretending to not know what we know. We should do our damnedest, though, to to not have doors slam shut on us.

How can we do this? I have found that not making it personal is essential to being heard: stick to the issue or issues at hand. Refrain from using manipulative or loaded language; I cannot be the only one who has had whole arguments dismissed because a simple word or two were poorly chosen. These things matter. I do feel that for the most part, people appreciate honesty and the ones who don’t, no matter how we say it, simply won’t be able to hear us until they are ready.

We owe it to ourselves and the animals to bring our best to our interactions. Think back about how someone brought up a difficult topic to you, something you didn’t want to hear at first, but you still listened. What did that person say? How did he or she say it? Maybe you have done it successfully, too. What did you do? If we can connect with one another’s humanity - what is important and unique about each other - instead of demonizing, we are much more likely to get a foot in the door. This is just common sense. Too often, we forget that a key to being heard is often as simple as talking to someone as we would like to be talked to, even - especially - with a challenging subject. We’ve got to get out of the way of our egos here in order to create positive change.