Creating the world we want to inhabit... 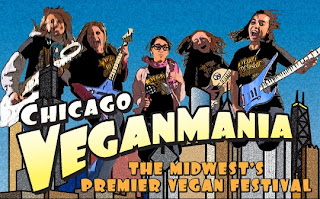 Chicago VeganMania may have started off sounding like a little pipe-dream, but I’ve learned to never dismiss those things. Making an event of this scope and scale takes real commitment, cooperation and hard work but it’s the magic of these silly little fantasies that really propels them into becoming more than just daydreams, and what helps us to lift something this big off the ground.

When we first started the thought process that eventually manifested as CVM, it was honestly rooted in frustration: Why didn’t a city as big and diverse as Chicago have its own vegan festival? Yes, there were stray vegan-friendly booths here and there at other festivals, but they weren’t the same thing. We still had to eat first or really work hard to find food there. We still had the fumes wafting off of grilled meat (at both conventional street festivals and “eco-friendly” ones alike) getting in our clothes and hair. Chicago has a rich tradition of ethnic and cultural festivals: why couldn’t we have our own, something that would show off the rich diversity of vegan living? Well, it turns out that it could.

No sooner did this idea get expressed than did we start rolling up our sleeves and finding allies who were equally driven to getting such an event to happen. We met and tossed around ideas, ultimately determining that we were mostly interested in a vegan event that was more ambitious than just an expo, and something with the word “vegan” right there in the title. We were advised at the beginning by some to take the word out, to call it “veg” or “veggie” so as not to intimidate the masses of omnivores we were trying to attract. Ultimately, our decision to use the word “vegan” right there in the name of the event helped to shape how our event manifested: there is nothing to hide, nothing to be afraid of, it’s all right out there in the open. How can we foster the changes we want to see in the world if the very people who are promoting the changes are afraid of the word connected to us? Around this early stage, one day my son was at a dinosaur class offered by the park district (correcting the pronunciations of the various ancient beasts of the teen teachers) and I resolved to come up with the name of our event by the end of the class. I sat in the corner with my pen and paper and without too much effort, Chicago VeganMania floated up out of the ether. It was perfect: gently making fun of vegans while still putting it all out there.

So we planned. And planned and planned and planned. We found a space in a creaky and beautiful old historic building with lots of rooms. We convinced vendors to take a risk on us and on the readiness of Chicagoans to embrace something like this. We figured out insurance, licensing, and all those things that make me want to hide under the covers. We got speakers - actually, they all came to us through word of mouth because we weren’t originally going to have speakers - and bands lined up. We immersed ourselves in the planning of something the likes of which none of us had ever done before.

That first year, we had no idea of what to expect. I had high hopes but nothing to base it on. As we pulled up to the building an hour before we opened, though, my heart leaped: on this unseasonably cold October day, a line outside the door snaked around the building and down the block. There was a line of people waiting for us to open at 9:00 in the morning on a Saturday. Chicago was ready for our event: it was more than ready. As I greeted people in the line before we opened in my little vegan cupcake costume, there were very few people I knew. People were huddled together, laughing, drinking coffee, rocking back and forth for warmth. They had smiles on their faces. They were there because they wanted to be there.

All day long, too, the people kept coming. The speaker room was packed, the vendor rooms swarmed with life. We didn’t dumb down our idea. We were fueled by optimism and naiveté but somehow, it worked. The dream actually came to be and it was better than we could have imagined.   So this is all to say that I don’t have much in terms of an essay this week - and maybe not next week - because Chicago VeganMania is this weekend and it is going to rock so hard, but before that, it will have eaten up pretty much every waking and lots of would-be sleeping moments. Please come see us if you can! Every year, we wonder why we throw so much time into an event that only lasts for a day but I always come back to this conclusion: because it needs to happen. People need to see how dynamic and exciting and accessible veganism is and we can create that vegan world, if only for a day. Don’t ever give up on your pipe-dreams. They are what creates the world in which we want to live.