Vegans Are Invincible and Other Dangerous Myths 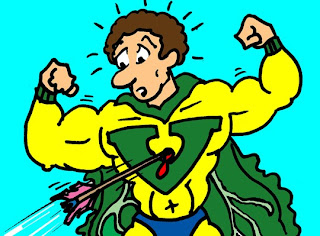 I have a friend who is in the hospital with cancer. He’s a really nice guy, a friend to many, an honorary uncle to lots of children. It is not expected that he will live too much longer. It is an advanced, end-stage cancer, and it started somewhere else but it is now in the bone. It is a cancer that might well have had a different outcome had he gone to the doctor years ago, when he first started developing symptoms. There were multiple complicated and deeply challenging personal factors that kept him from seeking help from within a Western medicine protocol but now he has to, and the best we can really hope for is that the terrible pain and discomfort he kept (mostly) hidden for years is finally managed.

Upon learning that he was sick, one of his relatives expressed a common sentiment, that he thought it was “ironic” that our friend was vegan and had cancer. I couldn’t help but wince upon hearing this. I know that one of the reasons my friend avoided medical help is that he didn’t want to be known as the sick vegan. He was supposed to be healthy: he was vegan, after all. Over the years, I have talked with other vegans who have also been sick, though not as dangerously so, and almost all kept it hidden for a potentially dangerous period of time, afraid of being exposed as a “failure” to their fellow vegans or having their illness exploited by others as proof that they were following a risky diet. They kept their illnesses and pain in secrecy, perhaps worsening something that was at one time minor, and they prolonged their physical and mental suffering. They became isolated, fearful and ashamed. In none of these cases, did veganism cause their illnesses, nor did it exacerbate it. In many cases, being vegan may improve the quality of their lives and their chances of recovery. The fact is, though, that they risked their mental, emotional and physical well-being because they didn’t want to expose themselves as ailing.

I’m here to state the obvious: vegans can and do get sick. We can and do develop painful, stubborn injuries. We are not always thriving and in perfect balance, and to claim otherwise is irresponsible and dishonest. What’s more, it can be life-threatening to those who would sooner suffer in secrecy -  certain that they have failed as vegans, scared that exposure will make people draw unfair conclusions about veganism - when the simple truth is that none of us is invincible.

Every day, I see more and more far-fetched claims about veganism from a health perspective, presenting it as the ultimate magic bullet to unflagging wellness. Vegans do get cancer (less often, but still), we do get fibromyalgia, we do get aneurisms, and we can also break our legs, necks and so forth. These things happen. It’s nothing to be ashamed about, but, too often, we choose to live in isolation rather than risk exposing that we are mortal and vulnerable, just like everyone else.

This is very dangerous.

Veganism is a lifestyle that encourages compassionate living. Very often, there are real physical advantages to it, too, but perhaps this is overstated in our eagerness to win people over and to save more animals.

As R.D. Ginny Kisch Messina, co-author of Vegan for Her, wrote, “At any age, we vegans can expect that our compassionate diet has the added advantage of lowering our risk for certain diseases. But, vegan diets are not ‘miracle’ cures or guaranteed prevention and it’s a mistake to ever believe that they are. As always, the only true promise that comes with veganism is that it will remove your contribution to the use and abuse of animals.”

Health crises are frightening whether you are vegan or not, but adding to the immensity of it is the pressure to be a perfect physical representation of veganism. How many people suffer in silence and keep themselves awake at night, terrified not only about the lump that they found but that they will have to face additional and unfair scrutiny because they are vegan? How many people don’t seek medical help because they don’t want to have relatives tell them that “they told them so” about being vegan? How many people risk their well-being because they don’t dare “out” themselves as needing medical attention?

My friend is in the hospital now; he likely has anywhere from weeks to a few months to live. He will enter hospice soon. Veganism did not cause his cancer but his unwillingness to admit that he was unwell contributed to his avoidance of getting help when it could have most benefitted him. It also contributed to his isolation, anxiety and pain. If you are not well, please consider getting help. You are no benefit to the vegan cause if you are socially isolated and suffering, and, what’s more, you deserve to feel better for your own reasons. You did not fail veganism and veganism did not fail you. It happens. We are all imperfect, vulnerable beings and we are living in a world with many toxins. Please reach out to your support network and get the help that you need before it gets worse. Suffering in silence helps no one.