How Can We Claim That There is Not a War On Animals? 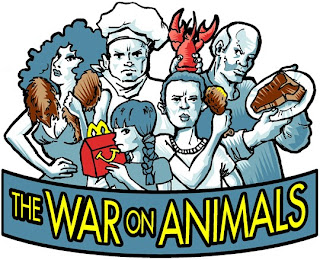 "To believe in something, and not to live it, is dishonest." Mahatma Gandhi

Last week, I saw an interesting clip of the late writer James Baldwin on an old Dick Cavett show. It was short, barely a minute long, but in that minute, he wasted no time in exposing the hypocritical vapidity of wishful thinking. “But aren’t things better for the black people?” seems to have been the launching point and with that, Mr. Baldwin set about efficiently knocking down the house of cards propped up by defiantly dishonest platitudes, exposing viewers to the nature of its true flimsiness.

Mr. Baldwin simply pointed to American institutions as proof of inequality and racism. “...I don’t know if the Board of Education hates black people, but I know the textbooks they give my children to read and the schools that they have to go to,” he said. “Now, this is the evidence. You want me to make an act of faith, risking myself [...] on some idealism which you assure me exists in America, which I have never seen?”

With an unflinching, bracing and rare honesty, Mr. Baldwin cut through the somnolent narrative of wishful thinking on that pre-fab talk show set in 1968 as the masterful orator and thinker he was.

Of course, I couldn’t help but see things from a vegan framework. Given that, I have to ask this: how can we claim that there is not a war on animals when we do what we do to them? How can we look at the institutions we’ve built and not see a wide gulf between our stated values and our actions? Why is speaking honestly about what is right in front of our faces such an act of provocation?

If we look at the institution of animal agriculture, how can we claim, as a species, that we value mercy and justice? With over 65 billion land animals killed for food each year in the world, the vast majority existing in an unimaginable hell of suffering and enslavement day-after-day, how can we claim with straight faces that we care about them? We have altered their very physical bodies in ways that intensify their suffering in order to get more product out of them more quickly and cheaply yet we claim to be an evolved species that values compassion. Isn’t there a discrepancy here? What we do to animals in dairy, egg and meat production is evidence of our malevolence toward them, is it not?

And, for those who claim to eat only “humane meat,” I have to wonder why the obviously Orwellian doublespeak of that particular phrase not glaringly apparent to otherwise intelligent people. When exploiting and killing animals is not necessary, anyone without a vested interest in keeping this habit intact can see that exploiting and killing is wrong. Yet so many will refuse to see what is plainly obvious because they would rather accept a cruel myth that excuses their habits than admit a harsh truth that forces them to reconsider.

How can we claim that we are kind when we look at the fashion industry? When animals are kept in cages, driven mad by confinement before they are barbarically killed so we can then wear their skins, how can we claim to be the only animals with a moral agency? The animals being kept in cold, harsh laboratories and experimented upon like they are inanimate objects and then thrown away like garbage when they are no longer considered useful: is this how those with “higher values” treat others? We call ourselves a more intelligent species while we are actively destroying the only home we know in order to maintain our convenient and familiar pleasures. Does this make any sense? Other species seem to intuitively understand the importance of keeping a clean, safe environment. Why doesn’t our supposedly more evolved species understand this?

As moral animals, should we argue that because we can do something that this also gives us the right to do it, especially when what we are doing harms and kills others, and when the ripple effect is felt by us all?

Let’s be honest: we are committing a war on animals and billions don’t have a choice as they are born in servitude, ready-made casualties by design. This war on the animals and our planet continues unabated not because we’re sadistic but because we simply don’t want to change our habits and challenge the status quo of our privileges.

Most vegans started as people who consumed and used other beings but it was through this honest reckoning with ourselves that we were able to start living in alignment with our values. The first step may be doing what James Baldwin did: noting the unbiased evidence of injustice, no matter how much it hurts, no matter how much people would prefer we stay silent.

There is a war on animals, we are the aggressors, and it is spiritually and morally wrong. It is also killing us. The truth hurts but the lies we tell actually kill. I think we know which is worse.

We can end our complicit role in perpetuating violence today, right at this moment, and knowing this is a deeply powerful thing. Acting on it is even more powerful.