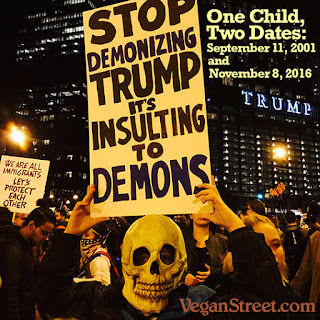 The morning of September 11, 2001, I was alone in our apartment in Chicago, having just read a headline on Salon that an airplane flew into the World Trade Center. It was hazy and random; I didn’t think much of it other than, “Oh, those poor people.” I didn’t suspect terrorism at first. I didn’t think it was intentional. As the news progressed on that sickening, staggering day that I watched like it was a newsreel from Hades, I remember feeling pity for anyone bringing a child into the world, for how they must have felt with the news. I did not know yet that I was newly pregnant; I wouldn’t know for another month or so. Maybe, I thought, it was better off not having children.

When I learned that I was pregnant, strangely, my anxieties immediately dissolved. I was filled with hope and excitement. This was the hope I needed. This future baby was my motivation for becoming more active with creating change and helping to build a better world. As my pregnancy progressed, my husband and I would watch in wide-eyed disbelief as this strange form in my middle danced and rejoiced when I drank a shake in the morning. We gave my mother, widowed and depressed, something to look forward; we imagined this future child, what he or she might look like. Oh, and what kind of name?

When my son was born – raging and radiant with a sputtering, feisty spirit after a long labor with unforeseen challenges – we had a name picked out but we had decided that if he didn’t fit the name, we would just put it off until we got to know him better. Thankfully, it did fit the baby who hung on for 52-hours and came out of my last minute c-section kicking ass and taking down names: Justice. His name was Justice and it perfectly suited him with his tiny fists of rage and assertive, confident voice. At least his name was one thing we didn’t need to think about as he and I faced the weeks ahead of a slow healing and bonding.


In all the years that have followed my son’s birth, fourteen now, I have never questioned if it was a smart decision to bring a child into this deeply flawed and needlessly violent world despite my initial misgivings. I had this child, with his dreamy, liquid eyes full of curiosity and his luscious, satiny skin; I had this child who was full of kindness, with a rich inner-world and the dogged individuality that has impressed me from the first day we met. Justice was more of what the world needed. I observed the world with fresh eyes with my son: in my arms, at my breast, in the carrier, in a stroller, toddling beside me, running through the grass, learning how to swing at the playground, skipping down the sidewalk to school. Yes, as someone who thinks and feels things deeply, life has not always been without turbulence for Justice but on the balance he is happy and content. In our life together, I have never again questioned bringing him into the world, I have always just accepted his life as an invaluable gift.

Or I didn’t question it until November 9 at midnight, our 2016 election. Or was it before dawn? That feeling of the room closing in on me, of watching a newsreel from Hades between my fingers again, numb hands, my chest pounding in my throat. I watched as our beautiful map filled in with large swaths of red, a few splashes of blue for our optical and spiritual relief, but hot, fiery red everywhere else. I finally had my moment of doubt, of reckoning. For the first time in my son’s life, I asked myself if having him was a selfish, cruel mistake.

On November 8 as the map filled out in heartbreaking red, my son lived up to his name and channeled the fierce spirit we met back in 2002. He stormed through the house, gutturally howling like a wounded, betrayed beast, tears streaming without inhibition. He punched a pillow in his tae kwon do gear. He sought affirmation that it wasn’t going to happen but as more states turned red before our eyes, we couldn’t give him what he so desperately sought. There weren’t any surprise electoral votes we could uncover; the math was pretty simple, after all, and it was all adding up to the unspeakable. “It’s not over,” my husband said. I could tell from the grave look on his face, though, that it was. This is a face that my husband only reserves for Really Serious Matters and because he knows how high-strung I am, I’ve only seen it a few times. It has always been warranted. I saw that face and I tried to hide my fear. My son could see through it.

His thick eyelashes heavy with tears, his face mottled with the emotions that poured out of him just like on the day he was born, Justice looked back and forth between us, the people he has entrusted to keep him safe, to keep the world okay. How could this be? How could we do this? How? Just how? He demanded answers and we just shook our heads sadly. I’m not worried about me but what about other people? Again, we had no answers except that we will do our best to protect everyone. How empty this felt to say.

My son finally left the room, sat at my desk and wrote the angriest screed I’ve ever heard from him. In fourteen years, I never once heard Justice use the word “hate” once, not even as a toddler; he is not a perfect being but “hate” is just not part of his vocabulary. We never forbade him from saying it: he just never did. Until November 8. I winced reading what he wrote, knowing that there has been an innocence lost, but I also understood that the acorn does not fall far from the tree: in order to heal, he knew instinctively that he needed to feel. And feel it he did. He was processing it. He was burning through it. This is exactly what I do.

When I passed his room in the middle of that night, a night that was eerily silent like a vacuum, he was sleeping on his messy bed, finally collapsed, a heap of spent emotions. In the moonlight, he can still look like a baby when he sleeps. I stood in the doorway, apologizing silently, for us, for them, for this sad, sorry world. For his sweet, trusting soul, for raising him as someone who believes in his heart that kindness and reason will eventually prevail.

“The world is falling apart,” I said to my husband, crawling back into bed, my voice hushed. “It’s over. It’s over.” It was midnight or 3:00 in the morning or maybe even between feverish dreams. “What did we do? What did we just do?”

It is the next day now when I write this and I am bone-tired and bleary-eyed and I have no answers but I will tell you this: on November 9, my son woke up with fire in his belly. He was vibrant. His eyes were sparkling. He was buzzing with creative, transformative energy and I’ll tell you why. All week, we have been planning to be a part of an activist group that was going to point at Trump Tower in Chicago at 5:00 the day after the election and laugh. This was when we all expected that he would be shut out. A week before, my son planned his sign. He was going to wear a demon’s mask and hold a sign that says, “Stop Demonizing Trump. It’s Insulting to Demons.” He planned that out himself. While watching the returns Tuesday night, my husband did the lettering on the board. Even as it was becoming clear that he was going to win, John kept writing out the sign. This morning, I woke up to the news that while we wouldn’t be pointing and laughing Trump Tower, people would be gathered to protest at the same location. I asked my son if he still wanted to go.

He ran upstairs to brush his teeth before school and work on his rhetoric. 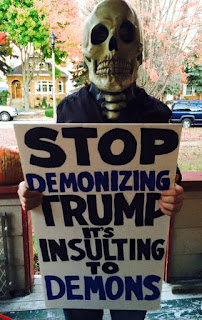