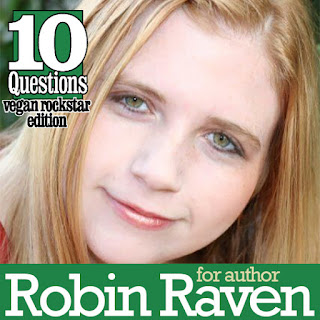 You know what holiday movie I can’t stand? “Rudolph, the Red-Nosed Reindeer.” God. it's so bad! Already dusty and creaky in my childhood back in the Paleozoic era, even as a child, I was appalled by the accepting attitude in the Rankin/Bassproduction toward bullying culture and the pressure to conform. Speaking of, how about the grown ups? Donner, Rudolph’s father is a bellowing cretin and Santa Claus is The. Absolute. Worst. Insensitive, tyrannical, humorless, distant and manipulative, Santa Claus only comes around to appreciating Rudolph’s worth when he figures out a way to take advantage of the difference that once disgusted and repelled him. Plus there’s the acceptance of the status quo of exploitation and ownership of other animals that underpins the whole terrible story. Do I have to spell out any more why this is problematic?

Robin Raven to the rescue! With her new children’s book, Santa’s First Vegan Christmas by Vegan Publishers, Robin begins her tale from that familiar place of accepted exploitation and oppression and turns the old story on its head. With Dana, the confident and assertive reindeer who refuses to be used or allow other reindeer to be exploited for Santa’s annual Christmas Eve ride, the animals have a wise and thoughtful voice. I won’t tell too much about this story because I don’t want to give too much away, but Dana helps Santa Claus understand what is wrong with oppressing others and helps him to connect the dots to compassionate, vegan living while still managing to enjoy the Christmas spirit. With lively, colorful illustrations by Kara Maria Shunk and engaging storytelling set to rhyme by the author, Santa’s First Vegan Christmas is a beautiful and inspiring story that encourages young people to consider others from the perspective of equality and respect. Shot through with holiday magic, Santa’s First Vegan Christmas is also a story about how we don’t have to compromise our values in our desire to celebrate favorite traditions. It’s a lovely, heartwarming read with a gentle but honest message of compassion. It would be a great gift for anyone, young or old, this holiday season.

I am honored to be able to feature the author, Robin Raven, as this week’s Vegan Rock Star. I love Robin’s kind and honest voice; the vegan movement and the animals are lucky to have her. 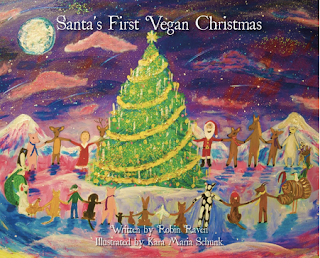 Yes, I have always felt a strong connection to animals. To make a long story short, I went vegetarian as a kid because I couldn’t bear the thought of animals being harmed and killed. It was always about protecting animals for me. I didn’t want to eat animals and was a vegetarian for most of my life before more recently becoming a vegan. Of course, now I wish I had gone vegan many years ago! I didn’t realize the harm that I was causing before going vegan. I will be vegan for the rest of my life now.

You know, it was easy for me to go vegetarian, but transitioning to veganism was more challenging. I think that simply having open, honest, polite, and kind discussions is the best way to go. If someone had told me exactly what was happening in the dairy industry, I would have gone vegan immediately.

When having personal discussions, I just speak from the heart, and I try not to state or repeat something without fact-checking it. Also, I don’t come from a place of judgment, but I am also not going to agree to a lie even when the truth is uncomfortable.

I think that kindness, compassion, and strength of character are strong among so many people I meet who are a part of the vegan movement. There are so many kind-hearted people striving to make a difference and build a more compassionate world. Every individual in the vegan movement can be its strength. We can all do something important.

I think that people get a lot of validation for practices and traditions that hurt animals. It’s socially acceptable to do all kinds of horrible things to animals. Since most people eat meat and other animal products, I think many people don’t feel compelled to examine their choices and don’t want to hear something that will challenge the way that they are living. I think the prevalence of pseudoscience and so many unfortunate vegan stereotypes are hindrances, too.

Great question, and I wish I could say that I had one. I’m totally going to work on that now. I handle each interaction differently.

Oh, there are so many. I love Vegan Street and all the incredible work you have done here! I am always reading and try to support vegan authors by getting their books whenever I can. I just read a fantastic book called The Vegan Way by Jackie Day.

I take self-care very seriously, and I try not to take myself seriously at all. Both these things can be easier said than done sometimes, though. I like to walk while listening to my favorite music. I love being around animals and talking to friends. I adore going to the theater to watch a movie. That’s one of my favorite ways to escape reality for a bit. I recently discovered a passion for photography. Savoring the simple joys in each day is important, and I keep a gratitude journal.

I could not pick a single issue, but many are close to my heart. I think an intersectional approach to activism is important. Prejudice, bigotry, and cruelty in all its forms is wrong, and we all need to make our voices heard loud and clear about that.

To me, being vegan is living with compassion and respect for all sentient beings.