Vegan Death Threats in the Age of Truthiness 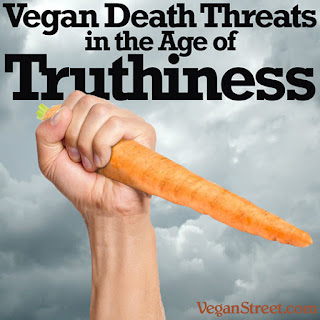 Back when I was a teenager and beginning to learn the train system in Chicago, I became familiar with guys who would ride the CTA and try to entice passengers (*cough*suckers-tourists-and-cocky-teenagers*cough*) to bet against them in something we all knew as the Shell Game. It went like this: a gregarious guy walked onto your car and announced that he had a game to play. Under one of three small cups, a.k.a., shells, he would hide a red ball. He would challenge passengers to bet against him to see if they could correctly guess where the ball was hidden after he’d shuffled the cups on his board. He’d make a great show of quickly moving the cups around on a board and then someone, clearly a plant, would enthusiastically take him up on the bet. The plant would “guess” correctly and win money, coaxing others to give it a try themselves, try it again double or nothing, on and on. The game was rigged so you were conned without even knowing it. Once you realized that you’d been played, you felt like an idiot but afterwards, you were wiser for having been suckered. The shell game, the smoke-and-mirrors and sleight of hand of petty scam artists and swindlers, comes to my mind as I think about a recent story that has been all over the media in recent days. Sadly, though, the stakes are much higher than being out $20 and a bit of your pride. On the bright side, if this story helps us to be more critical thinkers about the media we're receiving, we will all be better off for it.

I subscribe to Google news alerts on the topic of veganism. One thing that you notice when you subscribe is that our news cycles can come in waves. I’ve been subscribing for long enough that now I know that popular stories predictably generate many more copycat stories. In general, the majority of stories in these alerts are stand alone pieces, like a new vegan restaurant in San Diego or an interview with a vegan cookbook author in Oklahoma. Sometimes, the stories are interesting enough to inspire me to want to share them. Most times, I can tell by the headline whether they hold much interest for me or not. A few times a year, a story will get so much play in the mainstream press that my Google news alerts are all but dedicated to that one particular topic for days or even weeks at a time. For example, with the New York Times recently publishing an article on the wonders of aquafaba (about time!), I am now seeing another uptick in stories exploring the astonishing properties of chickpea water. I am here to tell you that we are in the middle – well, I hope the tail end – of one of those cycles if you hadn’t noticed already.

Since the story first broke in the mainstream media in late April, my Google alerts have been full of screeching headlines about a couple who opened a small chain of vegan (or nearly vegan but for honey) restaurants but are now eating animals themselves. They are espousing the tired, New Age pabulum that they are “grateful” for the animals they are raising to kill and consume on their farm and that eating them is part of the “cycle of life” that woo-inclined flesh fetishizers often use as a justification for their consumption habits. Their affirmation-inspired raw restaurants and their Mexican restaurants will keep the menus their founders developed when they were plant-based, though, so no meat, eggs or cow’s milk will be added to their recipes, thankfully.

When vegans on social media and the blogosphere, though, started exposing the pair on their “transition” to eating the flesh of dead cows – which they’d been foolishly, and, in typical New Age, heads-up-their-asses fashion, blogging about on their website (sample text: “But we know that while we die a little bit each day as we open our hearts further to the presence of love, and as we are the caretakers of our farm animals the responsibility for their health and well being lies with us,” and with that, I must do some anti-vomiting affirmations of my own), they were met with an understandable activist backlash. The vegan community helped to build these restaurants to where they are today and it felt like a betrayal as well as a slap in the face. For a day or two, things ticked along as par for the course until the narrative shifted and then, bizarrely, the reporting on the story hinged the focus on the claim that the pair was receiving death threats from seething, bloodthirsty herbivores. Death threats in and of themselves are not unusual these days. I’m pretty sure I get at least a couple silently hurled at me just walking from Point A (when the dog sniffed menacingly at the neighbor’s rose bushes) to Point B (when I accidentally stepped in the path of someone doing sprint training). Death threats are a way of life today, ironically. The reason this claim was so bizarre was that, despite the headlines, we were offered no example of a single one.

It’s the shell game. It's a bait-and-switch, a sleight of hands. This time, we were played for clicks.

On platforms as diverse as TIME to the Hollywood Reporter, The Raw Story to Jezebel, we are told that, oh, those hypocritical vegans have really revealed their seamy, violent underbelly now with their scary death threats. The headlines shriek about the putative death threats from alleged vegans but despite this very accusatory and charged headline, as I’ve read the actual copy of the stories, I have not come across a single example of a death threat. Not even a screenshot with a name blurred out. Not from a supposed vegan, not from anyone. Some of the media have couched their language more carefully, not surprisingly UK outlets, which have more sensibly placed the origin of the accusation with the couple who have claimed to be receiving said threats, but for the most part, readers are supposed to accept that these threatening remarks happened simply because the couple said that they happened, not because proof was offered. The reporting was shuffled so skillfully, as with the shell game, most people didn’t even notice that they'd been duped. In fact, I read a couple of these stories myself before I noticed that the assertion was not factually supported in the copy. There was not even one iota of evidence offered to support the claim of death threats. We’re just supposed to forget that little detail. This is not to say that vegans would not make death threats – I am confident that it’s possible – but it is to say that we did not see a shred of evidence of this despite the claim in the incendiary headlines.

I am not so naïve that I don’t understand the objectives behind click-bait or yellow journalism but when sensational allegations are presented as fact, they should be backed up with at least something approaching evidence, lest the journalists and media outlets rightfully be written off as peddlers of “truthiness.” Truthiness, a neologism coined by satirist Stephen Colbert, is “the quality of seeming or being felt to be true, even if not necessarily true.” Among the consequences of journalists and media platforms absolving themselves of the need to maintain a commitment to factual integrity and instead being content to uphold the much lower bar of truthiness is that for many people reading their fabrications, a screeching headline is implication enough and they are off to the races. Now vegans, already a marginalized and often misrepresented population, can add “makes death threats” to the list of headline-driven, factually-deficient media strikes against us, alongside “hates humanity,” “on a risky diet,” and “orthorexic.”

With an accusation as serious as threatening someone’s life levied against vegans as a whole, shouldn’t journalists be expected to offer even a modicum of proof? Apparently not. The shrill headline has done its job and now the news outlets are licking their chops as the content drives a wave of all-powerful clicks and they can pretend to shake their heads at our apparent bloodlust. Meanwhile, the couple in question have redirected the entire conversation with the media’s active support: they got their restaurants loads of free press, they got sympathetic tsks from the viewing public, they got to be embraced by spectators who are reassured by lapsed vegans, and they got to play the victim even after admitting that animals are now being “harvested” (seriously, what “former vegans” would use this deceitful term with a straight face???) for their meals. Everyone wins except the vegans and especially not the animals that people "lovingly harvest."

The ripple effect of lazy, manipulative, click-driven journalism threatens our democracy and our ability to interpret and understand real-life events. At its worst, it confirms prejudices, maintains a malignant status quo and is corrosive to critical thinking and analysis; it teaches media consumers, which is all of us who are aren’t living in a cave, to passively and often unknowingly accept this lower bar of truthiness. There is so much to lose when our media are content to aim for the lowest possible standards. As people who consume media, we must absolutely hold their feet to the fire of responsibility when a claim has been made for the sake of a clickable story and we’ve been sold a bill of goods.

Opt out of this elaborate shell game. Call out the sleight of hand when you see it. Insist on responsible media, not truthiness. Vegan death threats? Unless backed up with actual evidence, it only makes for a great speed metal band name.