Let Me Tell You Why I Am So 'Vegan,Vegan,Vegan' All the Time 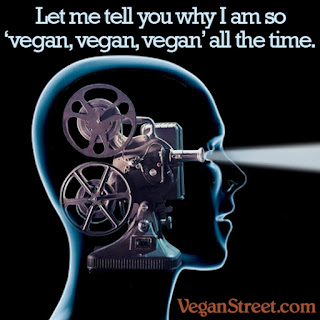 One common refrain we hear ad nauseum on our Instagram page is this: “I don’t tell you what to do. Don’t tell me what to do, you &^%* vegan. I don’t understand why you can’t just shut up about being vegan all the time.” It’s usually a lot more expletive-laden than that and for my purposes in writing this, I will ignore the fact that they showed up on our Instagram page to whine about us not leaving them alone, which is kind of strange but whatever.

This same sentiment seems to also be at the root of a couple of recent YouTube videos that went viral as well – I won’t link to them – which is basically, “Could you vegans puh-lease shut up about being vegan?!” Now, keep in mind that a good 95% of the time Vegan Street is accused of “pushing our agenda” down someone’s throat, we are simply sharing the facts without personalizing it but the question remains: if it is true that vegans talk so much about being vegan, why is this? Beyond the obvious intention to share knowledge that might help to influence people in a positive way, why do we just have to be so damn vegan-vegan-vegan about things? Maybe I can offer some insight.

We are haunted by what we know and what we have seen.

I can tell that you’re already rolling your eyes. This is not meant to be melodramatic or guilt-tripping: it is simply the truth. It can be challenging to put yourself in a the headspace of a vegan if you are not one yourself, but if you want to understand why we sometimes behave in ways that seem puzzling or even obnoxious to you, it is essential to understand that many of us are vegan in the first place because we empathize with those who society tells us don’t matter. We empathize but we must still live in a culture where we are surrounded by clear signs of disconnection, from advertising campaigns to freezer cases, shoe stores to meals with friends, evidence that is both brutal and coolly ordinary,
reinforcing that these lives don’t matter, that their bodies are perceived as objects, that their lives and deaths have happened without the slightest acknowledgement.

As sensitive people know, empathy is both a blessing and a curse: it’s a blessing to be able to live in alignment with our values but a curse to be rendered so raw and exposed because of it. Many of us experience something akin to trauma from knowing what we know and seeing what we’ve seen. For those from abusive backgrounds, knowing what the animals go through can trigger our own trauma responses. I mention this not to take attention away from the horrors inflicted on animals but to simply explain why so many of us behave in ways that seem strange to those who aren’t vegan.

To understand a vegan mindset better, you might imagine what it might feel like to know about horrific cruelties being inflicted on innocent lives on an incomprehensibly massive scale, knowing that it is entirely unnecessary, and that this is not an abstraction or just a bit of information for you. You feel it. You carry it around with you. Knowing what you know is something that can cause a great deal of despair and you will often feel the weight of it in your own body: you can feel a sense of dread, you can feel like something is pressing against your chest, you can feel like you want to cry, you can feel grief-stricken, you can feel very angry, you can feel disconnected, you can feel utterly void of hope.

Now imagine if what you know and what you have seen have taken up residency in a crawl space inside your brain that you didn’t even know that you had. You would be different, right? Even those who scrupulously avoid graphic videos and images still know what is happening because that reel continues to play in your internal crawl space. Last, imagine that you know that by withholding our collective financial support, we could easily topple the industries that destroy and help create a more just, compassionate and healthy world. It’s not happening, though, and not only do people not listen, many make the same comments and jokes that belittle what matters so very much. These are comments you will hear every day.

This all leads to a big reason, I think, that we are so vegan-vegan-vegan about things: it underpins so much of our outreach but perhaps it’s a misapprehension on our part. It’s that we take the adage “When you know better, you do better” to heart. We believe it to be true. There is an innocence lost when you learn that there are people who, despite knowing better and having the capacity to do better, choose to remain complicit in violence and destruction. In other words, they know better but they don’t necessarily do better. We’ve been led to believe that when people consume animals, it’s because they don’t know better. The fact is, though, that there is so much compelling information available today, so much up-to-date knowledge available and so much more access to being able to choose otherwise today. We live at a time when it’s never been easier but people consistently choose to maintain their status quo and support violent systems.

In truth, we are just desperately trying to help you to see and understand what we see and understand. Can that be annoying? I am sure it can be. There are worse things, though. If it means anything, it can be just as frustrating to be a vegan and not understand how people can be exposed to what we have seen and not be moved to want to change.