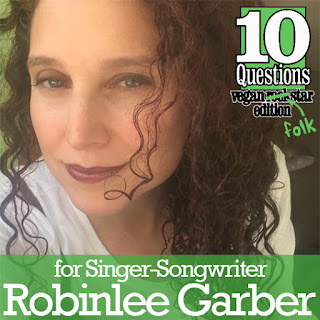 Can folk stars also be rock stars? Well, in the case of rising vegan folk singer-songwriter, Robinlee Garber, I would have to say, yes, yes, they can be. Full disclosure: Robinlee and I work together on Chicago VeganMania, where she runs our very sweet and original little lounge-type space, the Culture Café. At our Culture Café, Robinlee curates and emcees a day’s worth of great acoustic musical talent and maintains a chill, welcoming vibe as a respite for some to the wild vegan bacchanal that rages on in the main room. She does a sublime job of keeping everyone’s spirits up and making all feel comfortable.

When not showcasing other acts, Robinlee has been busy making a name for herself in the Chicago folk music scene and now the national stage with the release of her first solo album, Resilience. With a honeyed, clear and expressive voice, Robinlee’s collection limns the space we negotiate when we move beyond our comfort zones and challenge ourselves to embrace (or simply experience) the unknown. Songs are reminiscent in the best way to the 1970s California folk scene (think Jackson Brown and Joni Mitchell) with some torch and jazz elements that add warmth and complexity; slide guitars, cellos and banjos are subtle but evocative complements to Robinlee’s assured vocals. This is an album to listen to when you need a little boost, when the boss has got you down or when you need the company of an understanding friend but you’re by yourself. Currently #18 on the National Folk DJ Chart, it’s a joy to see this hard-working, compassionate and lovely musical artist getting the recognition she deserves. Sometimes vegan folk heroes can also be rock stars.

In 1972 when President Nixon declared a "war on cancer" my mom announced that we were going to finish all the meat that was left in the freezer, and then we were "done" with eating meat. Both my parents lost a parent when they were just teenagers to heart disease (my grandfather at 39-years-old had a heart attack, and my grandmother died of bone cancer at 41). I was very much aware at young age that meat was not a healthy food choice, and I was scared of getting cancer, even as a 5-year-old kid. Also, I loved animals, and the idea of killing one for food made me very sad. At about the age of 11, I was calling myself a vegetarian. Also, when I was little I can remember being at a department store and in the coat section literally petting all the fur coats. My dad came up from behind me and whispered in my ear something like "that fur coat your petting came from a really beautiful animal." That made me really, really upset after that experience.

For me it was a combination of learning how to prepare good food, and also learning how cruel the dairy industry was. I had no problem giving up meat, but I was addicted to cheese and loved products made with eggs. Once I discovered how to make the foods I love using just plant-based ingredients, I was totally set to switch to a more compassionate way eating.

I love to have vegan food at my shows and perform at venues that offer good vegan items on the menu. When I go to music conferences I will bring my own food with me and share it with other musicians. I've written some vegan-themed songs as well, and occasionally I'll play them at shows where I think people would be open to the message. Food and humor work the best in my opinion. One night I was having dinner with two friends who were each eating some kind of BBQ dish. When the food arrived I took one look at their plates and said to them seriously, "You'll be happy to know that I know CPR in case your dinner tries to exact revenge and kill you with a heart attack."

I think the movement has many, many strengths! I know so many smart, talented, and passionate people who are great at talking about all the benefits and the importance of being vegan. There's so much information out there now in the areas of health, the environment, and animal welfare. And of course, the food tastes great.

Vegans need to stop picking on each other. I believe that everyone is doing the best they can at any given time. Being vegan in an omnivore world is hard enough. We need to cut each other some slack and stop comparing who is more vegan.

Eating a plant-based diet will improve your health, heal the planet, and save the animals from a lifetime of unnecessary cruelty and death.

I have been lucky to be surrounded by so many vegans in Chicago! I'm a huge fan of Vegan Street and I love being one of the core members of Chicago VeganMania. For books I always recommend that people read The China Study. I love the movie Forks Over Knives, and I'm super excited about a new movie called Food Choices by Michal Siewierski. I'm also a big fan of the website ProtectiveDiet.com and have been following that program for over two years.

Watch movies like Forks Over Knives and other documentaries. I love to cook, be outside in nature, and of course hang out with other vegans! Being part of the core group for Chicago VeganMania is also energizing and inspiring. We have so many great people working on the festival.

Only one? I'm a big fan of supporting local adoption shelters for homeless animals and also pet rescues groups. If someone is looking for a specific breed of a dog, persuade them not to go to a breeder or a pet store, please!! Also, if you can't have a permanent animal companion of your own for whatever the reason, volunteering at a shelter, fostering animals temporarily, and assisting in animal rescues and transfers is a great way to help the cause (and get some furry adoration in return).

…Striving to attain a higher level of consciousness toward other sentient beings and the planet. It's also totally badass to live on and enjoy eating just fruits, vegetables, and whole grains.