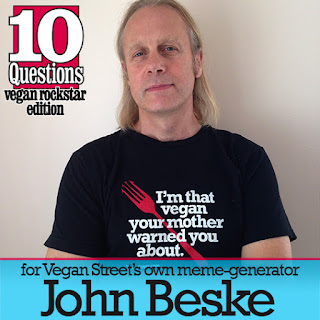 So this is kind of weird. I had someone else lined up to be my featured profile today and he didn’t follow through at the last second so, bootstrappers that we are, we resolved the matter in-house, which means you all get to enjoy the musings of my husband, the wonderful (and perhaps long-suffering) John Beske.

John is just awesome. What can I say? He’s a great husband and father, he does the dishes like a champ, he thinks everything I cook is amazing and he can meme the hell out of animal ag like nobody’s business. A longtime vegan – I called him on Feb. 1, 1995, said that I thought we should go vegan, and he was like, “’Kay” because that’s the kind of guy he is – and a talented designer, John, a.k.a., Johnny, a.k.a., Johnnycakes, a.k.a., Cakey, comes from an advertising background, having worked his way up to a senior art director position at the big agency Leo Burnett, but the writing was on the wall when his values began to deeply conflict with his ability to work on accounts like McDonald’s. He left that career in 1993 to begin applying his advertising know-how to creating a difference with advocacy-based materials. First at Sustain, a pioneering environmental communications agency, and now my partner at Vegan Street.com and Chicago VeganMania as well as taking clients at John Beske Communications, John uses his design savvy and his skills at communicating complicated issues to the public in comprehensible, moving ways to move people in the direction of more compassionate choices. He’s talented and hard-working and kind; in short, he is the perfect Lefty to my Pancho, the Watson to my Holmes, the Ethel to my Lucy. John quietly works in the background while I get more of the attention but, truth be told, he deserves much more of the spotlight. In my humble opinion, he is a behind-the-scenes hero and one of the most powerful allies we have in spreading the vegan message effectively and memorably. For this reason and more, John Beske is a Vegan Rock Star to know.

I grew up in a small town surrounded by farms, so I was pretty acquainted with some of the animals who would become food, but I never really connected the pieces. I even once toured the factory chicken farm of a classmate, and that disturbed me and kind of killed my taste for chicken, though a still would eat it occasionally.

And then, one night in late 1984, I was really sick with bronchitis, and lying in bed watching public TV when a documentary called The Animals Film came on. I was horrified, though too ill to move enough to change the channel, so I had to watch the whole thing. By the end of it I had determined to be a vegetarian. It would be several years before I was even aware of the concept of veganism, though I was slowly moving in that direction. I made the decision to become vegan in early 1995, partly because my then-girlfriend (and now wife and Vegan Street partner), was doing it [Ed.: smart man!], but further driven by the introduction of rBGH growth hormone in dairy cattle. The only way I could avoid that was to quit dairy altogether

One may not have been able to sway me by simply talking about the violence toward animals. I spent time on the farms of my buddies and saw animals which seemed to be living the sort of seemingly idyllic life that we’re taught they live (these were very small farms in the 1960s and early ‘70s – factory farming hadn’t really caught on yet). But I had a pretty strong sense of morality, so it might have been easier to play to that by saying something like, “If I am able to let animals suffer and die simply for a few moment’s of someone’s gustatory pleasure, am I able to also turn my back on tyranny, war and other abuses of innocent people?”  It also would have helped to know that there was an alternative. As far as I knew, everyone ate animals, and it was natural, normal and necessary.

I’ve spent years trying to figure that out. I think different things reach different people. I try to focus on finding words and images that concisely and compellingly point out the absurdity of eating animals (as well as the cruelty, immorality, wastefulness and self-destructiveness of it). When we can point out how eating animals is causing so much pain to the animals, the planet, our own lives, and also the utter ridiculousness of every single argument in favor of it, we’re halfway there.

The other half is to constantly foment, nurture and promote the vegan community and lifestyle. People crave comfort and convenience and the belief that they are good people trying to do the right thing. Guide them and give them a supportive place to go.

I’m always amazed at the intelligence, passion, creativity and drive of vegan activists. There are many thousands of people trying many thousands of ways to share their messages, and we’re all continually teaching and learning from each other. Thanks to them, the movement is growing exponentially. It’s a wonderfully fertile time, and I’m always excited to see what’s going to happen next.

Our biggest obstacle is the dark side of one of our greatest strengths: our passion. We often turn this passion into obstinance, self-righteousness and occasional bouts of just plain meanness. A lot of vegans are too quick to attack those we are trying to persuade. Many of us even attack each other for not being pure enough or focusing our energies in an imagined wrong direction. Unfortunately, the stereotypical “angry annoying vegan” does exist in real life, and is probably the single biggest hurdle our movement needs to overcome.

When you and others like you move away from eating animals, fewer animals will suffer, our water and air will become cleaner, global warming will slow, our oceans and rainforests will deteriorate at a slower rate, fewer animals and plants will go extinct, the world will waste far less food, water, fuel and money, more hungry people will be fed, and you’ll be able to extend your own life by lessening your chances of heart disease, Type 2 diabetes, and certain cancers. You’ll also feel better in your heart because your life will reflect your values. And you’ll be a part of a community of wonderful dynamic people who are making the world a better place for all of us.

Of course, I was influenced by the aforementioned documentary, The Animals Film. And over the years, I’ve been inspired by far too many incredible activists to list them all here. When I was just getting into it, however, I got the most inspiration from Howard Lyman, Rae Sikora, Gene Baur, Satya magazine, and the activists of Animal Rights Mobilization in 1990s Chicago. In particular, my primary inspiration is and has always been my beautiful wife, Marla Rose. [Ed.: Aw, Cakey!]

I think we’re at our best when we can conjoin two passions and use each to inspire the other. My other passion has always been art and design. Being around artistic works (also including great music, books, films, etc.), gets me recharged, inspired and fired up to jump back into the ring. I also need to spend time in nature, just walking or cycling or just hanging out. This reminds me how connected we all are and shows me what I’m fighting to protect. Visiting sanctuaries is really good for this as well.

The issue I finding myself writing about the most is the sheer destructiveness of animal agriculture on the planet. Our oceans and rainforests are dying, water is in deep danger of becoming privatized, and the effects of global warming are exacerbating famines, wars and the flow of refugees around the world. Most vegans understand the vast harm we have inflicted on a few species of animals that we have turned into commodities that end up on our plates. But it’s hard to grasp the tenuousness of our own species’ grip on survival, and how severely animal agriculture weakens that grip.

… the greatest gift we can give ourselves, our planet and everyone and everything else.
Posted by Marla at 1:45 PM