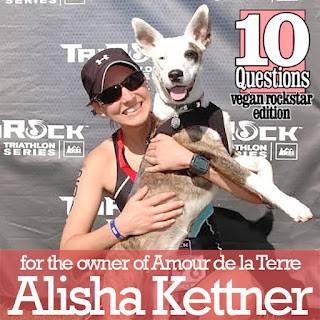 Alisha Kettner is a longtime vegetarian who went vegan a few years ago when her hair stylist helped her to connect the dots between the dairy and egg industries and animal cruelty. As a fashion forward shoe-lover and an environmentally-minded consumer, Alisha, also a certified registered nurse anesthetist, married her twin passions with her burgeoning convictions about compassionate living in her adorable, carefully curated boutique located in Oak Park, IL (one time home of Frank Lloyd Wright, Ernest Hemingway, Bob Newhart and Kathy Griffin and a little hop over the border from Chicago on the Green line), Amour de la Terre. As a self-described “eco-nerd”, the shoes and accessories Amour de la Terre carries reflect Alisha’s commitment to the environment as well as her broader social justice convictions by sourcing from companies that use eco-friendly materials, production methods (or both), which means there is no PVC pleather at her shop, and the items she sells are produced using Fair Labor practices, meaning they are sweatshop-free, something that most shoe companies are woefully out of step with. What a great lady with a fantastic mission!

I am lucky enough to know Alisha personally and I have always been impressed by her friendly, optimistic attitude, her commitment to creating a more compassionate, healthy planet and her fabulous taste in shoes. Please check out Amour de la Terre (if you don’t live in Chicagoland, they do ship) and support this wonderful endeavor. Also, get a chance to meet Alisha in person at her booth at Chicago VeganMania on October 10 as well as check out her panel on Compassionate Style and Beauty at 4:30, along with fellow lovelies Trisha Star-Perez of Starship Salon and Ashlee Piper of TheLittle Foxes.

I’ve been an animal lover my entire life. My childhood home had a dog, cats, fish and a bird, and when I grew up I wanted to be either a marine biologist or a veterinarian. At the library I would take out books on animals to try and learn anatomy, and at the veterinary office I would grab every one of the dog and cat info pamphlets lying on the shelves.

Looking back my animal activism began early. I remember one evening after grocery shopping with my father, we were in the parking lot putting bags in the car trunk and there was a man across the lot that was kicking a dog in the back of his van. I was probably only about 10 years old, but before my dad could do anything I ran up to that van and yelled to the man to stop, and I took down his license plate number and I then called around to find out how to get the dog taken away from the owner.

My grandmother was a vegetarian, and I remember during one visit with her in Tennessee we got to talking about the “why’s” of vegetarianism, and she put on a VHS tape that showed footage of factory farming. This didn’t turn me automatically, but I’m sure it was the earliest seed that was planted. One day at lunch in high school, I remember thinking it was gross that I was eating the flesh of an animal, so I simply stopped then and there. I wasn’t the healthiest vegetarian as a teenager, and could polish off a box of mac & cheese in about five minutes flat.

Then as an adult I met the lovely Christa, who was doing my hair for my wedding. She was vegan and I was vegetarian, so we hit it off. I told her I didn’t understand how she could live without cheese and omelets! She told me a few tidbits about the dairy industry that led me to do more research on my own, and after some internet reading and watching Forks Over Knives, I became vegan and never looked back!

Just like Christa was to me, it’s important to be nonjudgmental and not push too much information on a person at a time. Simply letting someone know a few facts to hopefully “plant seeds” in their head and lead them to do some more pondering and research on their own is the most effective way of encouraging veganism in my opinion.

I like to show people my passion for veganism, hoping it rubs off on them a tad. I like to show that veganism is not about restrictions or exclusivity; it’s about love for animals, love for your own body, and love for the environment.  I always ask how much a person is willing to let me tell them about the factory farming industry before a discussion. I feel if I become “preachy” or tell people too many graphic details before they’re ready, it will only backfire and make them more opposed to the idea of giving up animal products.

Also, I really love food (no really, my friends joke that I have a hollow leg). So I love to show that being vegan actually opens you up to more foods and spices than an omnivore is exposed to. My favorite is introducing hardcore meat and cheese lovers to vegan substitutes and seeing a positive reaction. We vegans are certainly not deprived of good food!

In my opinion, the vegan movement is primarily about simply loving animals too much to eat (or wear) them. Since most people are innate animal lovers, we can use this bridge to show that veganism is not some scary unobtainable state, it’s basically putting our ethics into action, and anyone can do it!

I believe it’s hard to get the word out effectively because we vegans are so, so passionate about animal rights issues and we can easily come across as being preachy or self-righteous. I admit sometimes I want to just scream and shake people and tell them how they’re supporting abuse and torture with the bacon on their plate. Then I remind myself that I’d lose a lot of friends and need to move to an island by myself, ha! As hard as it is, I try to remember that I too once ate meat and didn’t think twice about it at the time. I remind myself that the vegan movement will certainly “catch more flies with honey than vinegar” as they say. [Ed. note: Agave, Alisha, agave.] As much as I’d love to, I don’t believe I have the capability to make someone do an immediate 180 on the spot. Maybe I can encourage that 180 to occur eventually, but all I can do is “plant the seeds” for people to make the decision on their own.

Well, it depends on how many floors we get to ride. ;) The simplest answer is I’m vegan for the animals, for health and for the environment. I explain how factory farming is incredibly cruel, how the dairy industry can even be considered more inhumane than the meat industry, how consumption of animal products and milk protein (casein) has been linked to many common diseases, how 80% of the antibiotics in this country are used for the livestock industry, and how factory farming consumes ridiculous amounts of water and land resources.

Forks Over Knives was the earliest influential documentary for me, along with Earthlings, Food, Inc., Vegucated, Peaceable Kingdom, and Fowl Play. The China Study was one of the first books I read on veganism and it astounded me! The Kind Diet by Alicia Silverstone was also one of the first books I read and was also some of the first vegan recipes I ever used. I’m a fan of any organization that  peacefully works to save animals from unnecessary suffering, but I’m particularly a big fan of Mercy for Animals.

Between working in nursing full time and running the business, I don’t have a ton of free time. When I do get to unwind I enjoy going out for dinner with friends or hangin’ with my beloved rescue pup & letting her take me for a run.

This question interestingly made something come full circle for me just now. The three things I’m most passionate about in life are animals, the environment, and health, which are the exact three things that veganism positively affects, so I suppose that life choice is validated! :) Of all of the many animal rights issues, I’m extremely passionate about dog and cat rescues. There are so many animals in need of a good home, there’s absolutely no reason to go to a breeder. One can even find purebred rescues. It physically pains me to think of all of the sweet souls sitting behind bars in the shelters, scared and alone and possibly days away from euthanization. This is an issue I plan to get more involved in during my lifetime.

10. Please finish this sentence: “To me, being vegan is…”

“…a perfect demonstration of love to all: animals, self and the earth.”