On Blinders and Everyday Atrocities.... 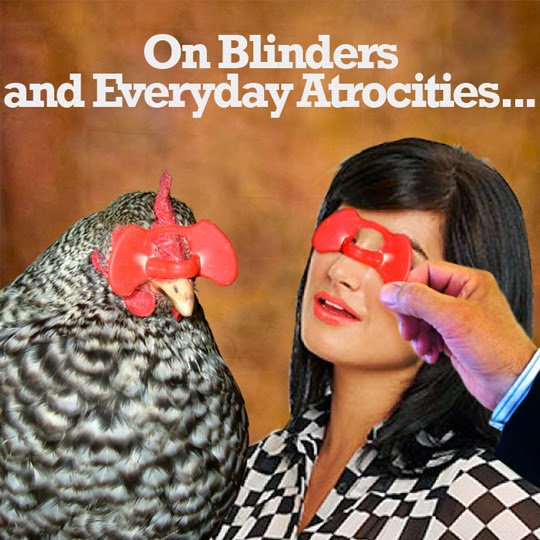 “The trouble is that once you see it, you can't un-see it. And once you've seen it, keeping quiet, saying nothing, becomes as political an act as speaking out. There's no innocence. Either way, you're accountable.” - Arundhati Roy

Last week, without even searching for it, I learned about yet another routine horror that is inflicted upon the animals that we eat. 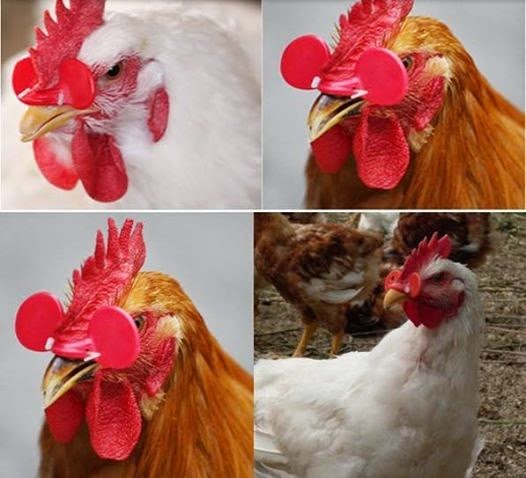 The birds in this photo are wearing something called “blinders” or “peepers,” which are especially treasured among backyard chicken enthusiasts as a way to keep these naturally territorial animals from plucking out one another’s feathers or cannibalizing each other due to the stress of captivity. (Blinders are not typically used in more intensive confinement operations because it is most time- and cost-efficient to routinely de-beak the birds to limit the expense of aggression on the business’s bottom line.) The blinders, pierced with a pin through the nasal septum or, with the pinless variety, affixed to the nostrils with prongs using a special pliers, block the vision of the bird, as well as interfere with eating, drinking, and natural behaviors like preening; both versions are also damaging to the chicken’s nostrils and beak. (By the way, if you want to see how genuinely at least one backyard chicken enthusiast cares about the animals in his or her care, you might want to see this; reading the description of how the blinders were fitted to the chicken, the nonchalant, mocking recounting of the bird’s distress, and the cruel “joke” this wannabe urban homesteader played on the now visually obstructed bird, we get a lens into the glacial sadism that underpins this individual’s hobby.)

I first heard about these blinders in a round-about way. I shared a meme we’d created and a woman commented on the thread, mentioning a rooster named Victor who managed to be rescued after he fell off a slaughterhouse-bound transport truck and had this horrible devise pierced through his delicate nasal passages. Imagine his disorientation and fear, not only being surrounded by other stressed birds but having his vision blocked after he fell off a truck. Fortunately for him, a compassionate person found Victor and he was taken to Full Circle Farm Sanctuary in North Carolina, an oasis where he lived out the rest of his days in peace and as much comfort as could be provided given what had already been done to him, finally having had the blinders removed by a veterinarian. Victor was truly a rare bird, much more of a statistical improbability than a lottery winner.

I’ve been off animal products since February 1, 1995, and part of my early education as a new vegan centered around learning about the multitude of strategies agribusiness has developed to make it easier and more profitable to dominate the animals who are eventually consume. I’ve long known about forced impregnations and castrations without anesthesia or follow-up care, about formula-fed calves and male chicks killed at birth, but through the process of researching and creating our weekday memes for Vegan Street, which my husband and I revitalized last July after more than a decade of dormancy, we have learned about so much more. It turns out that what I knew about was really the proverbial tip of the iceberg; just when I think that I can no longer be stunned by this industry’s capacity to engineer truly sadistic devices and practices, pervasive on both large-scale and small-scale enterprises, I learn that I was mistaken. There is more, much more. Nearly every week, I learn about these things, from dairy huts to dead piglets being fed back to their mothers, from weaning rings to, now, blinders. By this point I know that there will probably be no shortage of occasions to be thunderstruck by the true depravity and chillingly rote methodology of the animal agriculture industry as it continues to supply a steady quantity of flesh and animal products to meet consumer demand.

I’ve learned that for virtually every part and function of the animal that could interfere with flesh, dairy or egg production or profits (they are virtually interchangeable), we have devices designed to frustrate, minimize or remove those “impediments.” Declawing, dehorning, and tail docking done as a matter of course, to name a few more things, and there are also barbaric practices to make the animals easier to identify and control, such as ear notching, branding, and nose ringing. Snoods, toes, wing joints and more are forcibly removed as standard practice, again, without anesthesia and without follow-up care, to reduce damage, hardship or financial risk to the operation’s bottom line. They are our living products, kept alive until they are worth more dead.

There are entire, robust industries that have emerged to facilitate turning these sensitive beings into products as quickly, easily and efficiently as possible. As I research more, I am in a constant state of bracing myself as the hidden underbelly of agribusiness emerges and as we work to expose people to what happens behind the heavy curtains. Once in a while and with a great deal of effort, the curtains are parted just a little bit and a tiny percentage of the public can see a small bit of what is happening. As we are peeling back the curtain, what we see is every bit as atrocious as could be expected.

Actual blinders are used on chickens and metaphoric ones are used by people on ourselves when we can’t face the consequences of our habits. These are the everyday atrocities we agree to when we eat animals, whether they were done with our own hands or someone else’s hands. Make no mistake, though: the atrocities are happening because of us and, as Arundhati Roy said, once we know, we are accountable whether we act or we don’t. There is no innocence. You can’t un-see what you’ve seen.   Take off all the blinders. The atrocities can end because of us, too.
Posted by Marla at 8:09 AM