In Our Capacity to Suffer, We Are All the Same... 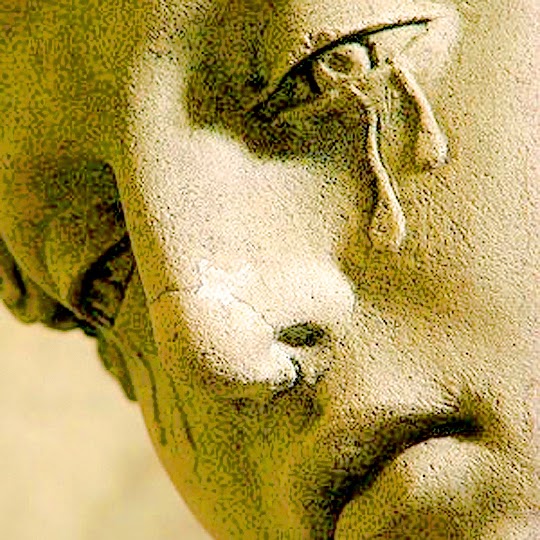 Recently, I had a tooth abscess. As you can see, my life is as shot through with sexy glamor and sparkling razzle-dazzle as a Bob Fosse dance number. It was a week before my dentist was able to see me but this seemed okay at first because I wasn’t feeling much pain. I patted myself on the back for all that daily kale in my system, that week of raw foods before the abscess happened, believing that I was holding it all together through excellent nutrition. I was prevailing. As the week progressed, though, my condition worsened. My cheek began swelling up on one side like a pufferfish and I stared in the bathroom mirror each morning, fearful of what I might see as I cupped that tender and ever-ballooning side of my face. I kept my clove oil, arnica and oil of oregano nearby as I worked and had to take the strongest over-the-counter painkillers I could find before I went to bed if I had any hope of falling asleep. By the end of the week, I was feeling a throbbing pain in my gum under the tooth each time it pulsed. So, yes, it was a super-fun week.

Of everything that I fear, from a call from the IRS to the phone ringing at three in the morning, I have to say that the threat of chronic pain or disease trumps them all. Isolated incidents aside, I have thus far been pretty damn blessed with great health, knocking on wood as I write this. I can’t remember the last time I even had the sniffles and whenever I am under the weather, it is mercifully short-lived. My first bout of food poisoning (due to a hot food bar, I believe) was last summer, and it was 24 hours of chills, a fever, and re-evaluating if I wanted to bring a high power into my life just to have someone to bargain with before the yuckiness lifted just as quickly as it had entered my world. This is not to say that I am a wuss, by the way. I am both stubborn and have a high threshold for pain, enduring two days of unmedicated labor with my son.

That being said, I know how much pain and disease can change us and perhaps that’s what frightens me most about it. My mother lived with us for the last three years of her life with very bad arthritis, Alzheimer’s and a neurological disease related to Parkinson’s. When you are as unwell as my mother was, your whole demeanor changes. It’s hard to be positive, it’s hard to think about anything other than your pain. We become very unhappily self-centered. As the French Buddhist monk Matthieu Ricard explores in his excellent book Happiness, self-centeredness and suffering are tightly interwoven with one another. When we are not feeling well - emotionally, mentally, physically - we often cannot help but be self-centered because it is so very hard to escape ourselves: even when we are temporarily distracted from it, our discomfort returns us to our suffering again and again like a boomerang. My mother was an extremely generous person who thought of others first to a fault, but as her illnesses and deterioration progressed, she became a virtual prisoner to her bodily pain. As this happened, the selfless mother I knew became almost unavoidably self-centered. I am sure she would have loved to escape from the shackles of her physical self more than anything. The rare moments of levity and enjoyment she enjoyed happened only when her pain was managed somehow.

As my own week of the tooth abscess continued, whenever I would catch a glimpse of myself, I barely recognized the person who was reflected and not just because of my swollen cheek: my forehead was etched with reflexive scowl lines in it. It hurt too much to laugh or even smile much, even if I was so inclined. When the pain dissipated, it was hard to enjoy it because my mind, that feral bugaboo, anticipated and dreaded its return. Whenever my son saw my hand rubbing my cheek, he would say, without prompting, “I’m so sorry you don’t feel well.” Perhaps if I were a better Buddhist, I could ride the waves of pain, be with it, and let it dissolve instead of bracing myself, but I wasn’t able to do that. All I knew was that I was in pain and I wanted it to stop as soon as possible.

During that week, my thoughts also returned again and again to the animals living in captivity. This one tooth abscess chiseled away at the core of my happiness. I have a life that is comfortable and where all my needs are met, where I am loved and have the amazing privilege of being able to make my own decisions, but the constant reminder of pain was enough to undermine everything else I have in my favor, which is considerable. Imagine how the animals - scared, confused, denied their freedom, surrounded by stench, noise, aggression, and suffering - imagine how they must feel? The infected and painful areas where their tails have been docked, their beaks have been cut, they’ve been artificially inseminated, they’ve been castrated, they have mastitis (which I had once and is no joke), they’ve had teeth yanked out without anesthesia or painkillers: the sheer amount of suffering they live with day-in and day-out, most barely able to even stretch a limb, is incomprehensible. Just consider the animals being unable to break free from that pain, both as actual prisoners of a system and virtual prisoners of their own corporeal suffering. These beings who, to the best of our knowledge, mainly live in the present moment. I am staggered once again by the depth, breadth and scale of the cruelties we inflict because we enjoy maintaining our unnecessary habits. We have not only inflicted this suffering upon them but, with it, we have stolen their capacity for feeling joy.

This one little abscessed tooth will be fixed. I’ll get better and my life will go on. I have a life worth living to return to, too, full of small pleasures and great joys. There will be pain again, no doubt, fears, disappointments, and so on but the reality is that there is no other life I’d rather be living. How can we impose pain upon others when we know how shattering it is to suffer? When my mother struggled with the confusion and devastation of her diseases, at least she had a loving family, people who cared for her and tried to minimize her pain, and a safe place to live. The animals have committed no crime and they have nothing to mitigate the suffering we impose upon them.

I am vegan because no one deserves to have their joy stolen from them.