Vegan Food Owes You Nothing 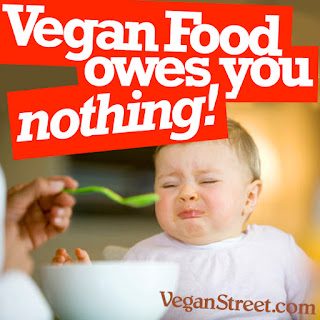 “Truth is what’s left when you’ve run out of excuses.” - Marty Rubin

The vegan food world has made astounding progress in the past 15 years, with the last five or so especially impressive from an array of angles, especially quality, variety and distribution. Every single day when I open my Google alerts, I find news of even more advances on the vegan food front and it is showing no signs of stopping. Nondairy milks were the first commercial products I can remember that achieved wide mainstream popularity as perfectly suitable replacements for their animal-based counterparts, but not long after, plant proteins began to compete for valuable shelf space, then vegan cheese companies began stepping up their game a few years ago and now we have at least a few options for eggs that have never passed through a hen’s cloaca. Not to mention mayos, marshmallows, sour creams, yogurts, milk chocolate, creamy dressings and even a bee-free honey that are produced without animal products and suffering. These items were just pie-in-the-sky wishes not too long ago and now, thanks to everyone from brilliant food scientists to ethical entrepreneurs, they are rippling out to markets in the U.S, and slowly gaining traction around the world.

While quality can still always be improved, it often seems like every new product in each category is an upgrade, or at least a new interpretation, on what already was on the market. There is still a lot of room for growth with regard to improving access to a wider variety of retail outlets and lowering price points as much as is possible in our hopelessly rigged food system, but, little by little, as moneyed would-be backers recognize the potential for making big financial gains by investing in these start-ups and real economies of scale begin to kick in, impediments to broader distribution and access will crumble. It’s a matter of time and we’re already beginning to see it.

We can see a similar dynamic at work with dining out options: Whereas 20 years ago, vegan options were few and far between, today we have sophisticated “vegetable-forward” establishments like Vedge, see-and-be-seen hotspots like Crossroads, and regular ol’ chain restaurants with vegan offerings on their menus, illustrating that it doesn’t make much business sense to ignore our consumer base and also that our palates have evolved far beyond being content with a lackluster frozen veggie burger as our only option. In addition to the expanding vegan influence, interest from omnivores who are dabbling has helped to raise the bar with regard to quality, variety and distribution as well. This growing market is just at its infancy and will eventually result in fewer animals being born into unimaginable misery.

With all that said, I have to ask a rhetorical question: Does having an increasing abundance of vegan products mean that everyone is going to like everything that they try? Of course not. I’m vegan and there are many things I avoid like the plague. (Hemp tofu, I’m looking at you.) (I’m just kidding. I’m not looking at you. Please don’t hurt me.) Does the increased availability of vegan food mean that some people won’t like any of it because it’s just not “the real thing” or “it’s weird”? Yes, sometimes. Habit and confirmation bias reinforce one another as powerful yet often unexamined internal influences. After many years of hearing meat-eaters complain about vegan food not meeting the high standards of those who, you know, eat flesh, lactation and ovum on the regular, though, I just have one thing to say: Vegan food owes you nothing. This article recently stuck in my craw and it kept aggravating me the more I thought about it because of this single sentence, expressing an arrogant and entitled attitude that I find to be a frequent undercurrent in so many criticisms of vegan food: “But while chewing on a slice of pepper jack at Vromage, and noticing how the red pepper separates from the cheese-like base in a way that Trader Joe’s version never would, one phrase stuck in my mind: ‘Nice place to visit, but wouldn’t want to live here.’”

I should say first that I appreciate people who are moving beyond their comfort zone and heading in the direction of consuming fewer animals. Dietary change is harder for some than others and small changes are better than none. Some people are really, really hung up on verisimilitude for some reason and others find it unnerving. I get that we all have our own preferences. However, if you understand the ethics of veganism but still cling to meat, eggs or cheese with the excuse that animal-free versions aren’t to your liking, I’m going to level with you: You are going to have to figure out another excuse because I am not buying this one. You don’t remain complicit in carnage until the conditions are right and comfortable to you to stop. You stop when you understand your role in what’s happening and decide that this is not acceptable to you. Otherwise, you are just making excuses.

If you don’t like the plant proteins, fine, don’t eat them. If you think that veggie burgers are too mushy, try a different brand or experiment at home. If you didn’t like a certain restaurant, maybe try another one. If you think the cheeses are terrifying, I don’t know what to say other than you should have tried them (them meaning the one brand we had) 15 years ago. Some will be enjoyed more than others. Just like all foods. That is the way it goes. Blaming your consumption habits on the fact that you have anxiety about or an aversion to vegan foods is a load of nonsense, though. If you eat flesh, eggs and dairy and your inclination is to blame vegan food for not being good enough to make you stop, I think you need a reality check.

I was vegan before there were popular nondairy cheeses and just on the cusp of decent milks on the market. It would be years before there were decent cheeses. I’m not saying this to imply that by going vegan when I did, I think I withstood some major sacrifice – I do not believe that, nor did I at the time – but to illustrate that it is eminently doable to live as a vegan without eating cheese, burgers or corned beef like your grandmother made. While my first year was one of some screw-ups, never once did I think that my burgeoning awareness would have to be put on pause until the vegan food world improved. Over time, I simply got over my taste for cheese. I learned how to cook. I discovered what I liked best. I stopped being passive and I took ownership of my experience as an empowered vegan.

Continuing to participate in exploitative practices because you prefer this option over withdrawing from it is like saying that abusers should be allowed to continue to harm until they are offered an alternative that they enjoy equally. It is simply amoral and the animals of the world – those currently in captivity and those who haven’t been born into it yet – do not deserve to have their outcomes held hostage to anyone’s capricious taste preferences. Should our decisions to support or not support cruel industries and violent acts really be contingent upon our shifting tastes? What if you really like the way that a violent, non-consensual act makes you feel? What if not being able to indulge in it at your whim makes you feel stifled? Is maintaining your practice of violence justifiable then? Of course not. This is a deeply entitled and abusive way of thinking, nestled in the very core of a mentality that allows cycles of tyranny to continue and to ripple out.

Just as society does not owe sadists a suitable replacement for murder before they can be expected to not perpetuate their horrendous acts of violence, it is the same for consumers of the end product of suffering and cruelty. The kind choices do not adjust to your demands – you adjust to the kind choices available. People who support the industries and practices that harm others should be expected to stop because that is the moral and evolved imperative and also stop expecting vegans to cater to their preferences like they’re bratty toddlers who must have every demand met or they will have a tantrum.

Don’t get me wrong: I believe that we should do everything in our power to ensure that food is as high quality as possible. But if you are wavering on going vegan because, wah, you don’t like dairy-free cheese as much as you do the stuff that is made from the product of forcibly impregnated mother cows, though, I have to say three words: get over it. You are supposed to do the right thing because it is the right thing to do.

Vegan food owes you nothing.
Posted by Marla at 9:43 AM