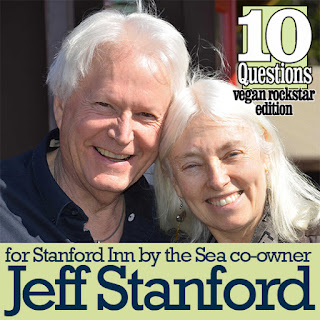 I am really happy today to feature Jeff Stanford, who, along with his wife, Joan, founded the Stanford Inn by the Sea in Mendocino, CA, the only vegan resort in the U.S. Inside the Stanford Inn is their restaurant, The Ravens, which has been creating local, whole and sustainable food grown right on their own organic biodynamic gardens at the inn since the mid-1990s. Jeff and Joan recently published their first cookbook, Dining at The Ravens: Over 150 Nourishing Vegan Recipes from the Stanford Inn by the Sea, a beautiful cookbook full of gorgeously plated, colorful and creative recipes. As a pioneer in plant-based cooking and his ethics rooted in compassionate, sustainable living, I am thrilled that Jeff Stanford is today’s Vegan Foodie.

1. How did you start down this path of creating delicious food? Was a love for food nurtured into you? Did you have any special relatives or mentors who helped to instill this passion?

I was inspired by two people - my mother and my father-in-law.

My mother enjoyed cooking. When I was young, I watched and my mother cooked. I never really cooked with her and didn’t watch particularly when I could go out and play, however, there must have been many hours - and I remember her joy as she talked about what she was doing. When I was on my own, living with Joan, I cooked.  Cooking was a break in research and writing when I was in graduate school. I would call my mother and she would explain how to do something. She also made a file box of all the recipes she knew that I liked.

My mom’s enthusiasm came from her mom. During the Depression, when my mom was very young, her parents converted a well-known older house in Westport, Connecticut into an inn. Apparently my grandmother cooked for guests (who I imagine were primarily business associates of my grandfather visiting from NYC). The stories I remember from that period regard wine, which they hid in the house to serve to guests at dinner. It was during Prohibition. Often the wine was not stable, continuing to ferment in the bottle. Corks would spontaneously blow out and the wine would pour out. One night, my mom and grandmother told my brothers, sister, and me about a time they were sitting in the living room with guests when they heard “gunshots,” followed almost immediately by “blood” dripping through the ceiling.  Of course it was the wine.

My mom helped my grandmother in any way she could in the kitchen. After she was married, my mom emulated her mom bringing passion and enthusiasm into her kitchen. My sister, brothers, and I were bathed in her enthusiasm. She became well known for her cuisine and for entertaining in our home. I learned about this reputation after she died and people wrote to us regarding their experiences with her.

I learned enthusiasm for food from my father-in-law. When Joan and I joined her mom and dad at Lake Winnipeg on weekends, he enthusiastically cooked breakfast and made each a special event. I often cooked at night and he always relished the dishes. We were neither vegan nor vegetarian and I was known for making barbeque, seared roast leg of lamb, and other dishes that he loved.

2. What was your diet like when you were growing up? Did you have any favorite meals or meal traditions? Do you carry them over today?

We ate well in the manner of mid-twentieth century values, and accordingly a bit light on vegetables.

I did have favorite dishes. First was and is salad. I have always enjoyed cold, crisp fresh vegetables with little or no dressing. Second was a chocolate mint cake, which I have not tried to convert to vegan. Third, lemon bars, also Joan’s favorite, which we continue to make a vegan version of. Finally steak, meatloaf, lasagna, and French-fried potatoes.

I have not tried to replicate most of the dishes, which were meat. I am far more interested in experimenting and growing as a cook. The past is past and holds no nostalgia.
3. What is the best vegan meal you've ever had? Give us all the details!

The new menu that we haven’t introduced yet. We are in testing now and our preliminary recipes, which are written in our offices by the kitchen director and me, are working beautifully. It is fusion—taking past entrees from the restaurant such as barbecued pulled trumpet royale mushrooms—and creating a Southwestern/Mexican twist.
4. If you could prepare one meal or dessert for anyone living or dead, who would it be for and what would you create?

That’s a tough one. What immediately came to mind reading the question is not to prepare a meal for someone but with someone. This issues from our experience: Joan and I have had wonderful times working together cooking for just our family, extended family (reunions) and friends. (And we believe the Ravens thrives because there’s no one chef—the kitchen is co-creative!)

There’s one person who passed on when he was twenty. I would enjoy cooking with him any dish that he would enjoy, like he did Pete’s coffee and whole food burritos.

5. What do you think are common mistakes in vegan cooking and how do you avoid them?

Good question: simple answer—overthinking it. Particularly mistaking potatoes, including white potatoes, as evil. They are whole foods that created huge population expansions because they improved physical wellbeing and raised fertility rates, noticeable in those places where they were introduced.

6. What ingredients are you especially excited about at the moment?

Whole plants. Making whole food substitution in our dishes—e.g., creating a hemp ricotta rather than a tofu ricotta. I’d like to do more with radishes (kidding).
7. What are your top three cuisines from around the world?

Mediterranean, Mexican, Thai.
8. Who or what has been most influential to you on your vegan path? Individuals, groups, books, films, etc. included.

None of the above. I began the path with the recognition that I could not kill the chicken I smelled cooking in our kitchen. In that thought was an allied thought, “Who killed it?” And I realized that by eating it, I was asking another to kill for me, which I would not do for myself or my family. I quit eating meat. I became vegan when I read the practices of a dairy that the United States Humane Society declared to be the most humane. It wasn’t.
9. What issue is nearest and dearest to your heart that you would like people to know more about?

With regard to food - whole foods. We evolved on whole foods as well as our biomes—the bacteria, fungi and perhaps even some viruses that make up more of us (at the individual cellular level) than us.
10. Last, please finish this sentence. "To me, veganism is…"

Mindfulness. A basic aspect of mindfulness—paying attention to every aspect of what is prepared to eat and what I’m eating, from selecting ingredients, preparing them, apportioning them, and serving them.

It is a great beginning to a practice of meditation as I understand it. Attending to the task at hand, understanding where the components come from, their relationship to the planet, to me, to health, mental as well as physical.
Posted by Marla at 12:37 PM