The Trouble is, You Think You Have Time... 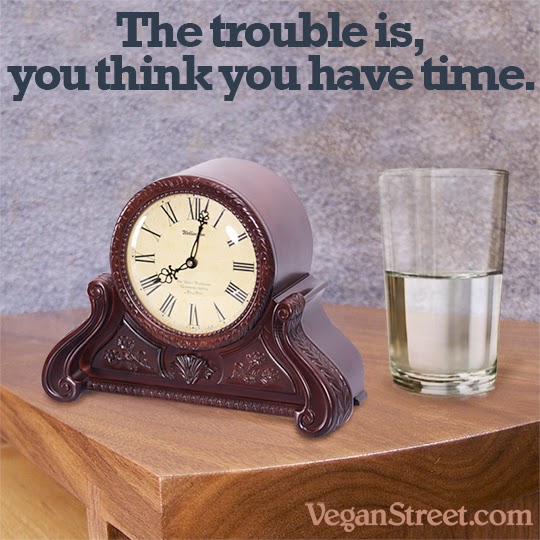 Last week, I sat with a friend who is dying of cancer. She is such a thoughtful person that quite literally on her deathbed, she was concerned about me getting a ride from the airport (she arranged it) and that my hotel was comfortable (it was). My friend is such a dynamic, vibrant and engaged woman that even on her hospice bed surrounded by a maddening tangle of oxygen and hydration tubes, she still exudes a powerful presence that contradicts her 80-something pound body, riddled with the metastasized cancer that is advancing inside her fragile form, bit by bit.  She’s in her final weeks. She is 50 years old.

My friend is vegan (yes, we get sick, too, and denying that is deceitful and perhaps dangerous) and has been for 30 years; she was an early-early adopter. Behind the scenes, she has done more to promote and advance the vegan cause than anyone I personally know, which is saying a lot because I’m fortunate to know some pretty remarkable people. She’s been at the ground floor of many emerging cruelty-free businesses and advising them with her sharp business acumen, supporting new vegans and nurturing novice activists, and in her spare time, she’s created a very popular vegan potluck in her community. From her vantage point, my friend has watched vegan culture flourish and expand far beyond the early, lonely days where vegans were far-and-few-between, scattered around like a few isolated seedlings. She’s witnessed the expansion of vegan restaurants, offerings and products; the evolution of veganism from being considered a little-known oddity to a burgeoning social justice movement; a solution to our downward environmental spiral acknowledged by top scientists; she’s seen festivals, events and organizations dedicated to the promotion of compassionate living spread and expand their reach like wildfire. These things are finally blossoming from the seeds she helped to plant and cultivate for the past thirty years.

She wishes she had done more, though, when she was able. Even a year ago, she was still in her prime and she had so many ideas and plans, smart ones that someone with her savvy and connections could really pull off. She cannot do those things now, though. For the most part, she’s confined to her bed, my beautiful friend, this firecracker who has lived and breathed veganism more than anyone I know, and what she regrets is that she didn’t do more because she knows she had lots more to give. She hasn’t run out of passion; she’s run out of time.

She could have - she should have - done more, she insists. More activism, more organizing, more creating, more collaborating, more outreach, more development. More veganism. Last week, I held her hand and cried with her, reassuring her of how many lives she’s touched, how the world is a better place because of her, how many people she’s uplifted with her confidence in their ability to manifest their values. She was right, though, and I couldn’t deny it: she could have and should have done more. This is true for each of us: we could and we should do more because we can never do enough, not even if we’ve dedicated our lives to it as my friend has. I bump up against knowing this and wanting to be kind to myself, to believe that what I do is enough. There has to be a middle path.

Given what the animals are up against, we could never do enough to help them. There aren’t enough hours in the day or days in a lifetime. Knowing how hard it is to actually make a perceivable difference, it’s no wonder we distract ourselves with silly tangential arguments on Facebook and berating one another over semantics when, if we had some modicum of unity, we could create much more collective change for the animals. Fighting with other vegans, distracting ourselves with petty disagreements, blowing off steam at one another, not moving on when it is clear that is the smart choice, insisting on being “right” when what matters most is to be effective: this makes us feel like we’re doing something. It is an illusion, though, and I am as guilty as anyone of feeding into it. The animals’ lives are not improved because I really put someone in his place. When we do this, we are squandering our most precious resource in life and that is time.
My friend has no shortage of passion for creating change but she can’t physically do it anymore. At her bedside, she asked about Vegan Street, about our plans for the future, and her eyes lit up as we talked. As I described what I am seeing, I could see her imagining it, too, how our plans could work, how it could manifest. Her energy, so closely managed now, became buoyant and excited again. Then she started crying. She won’t be there to advise us, to introduce us to people, to cheer us on, to enjoy it. She won’t live to see it. The fact is, though, neither may I. There are no guarantees. All we have is this moment. I’m not saying this to be morose but to be honest: we are all one diagnosis, one careless driver, one strange pain that won’t go away from a similar outcome as my friend. What can we do now to create more good with the unknown amount of time that we have?

Last summer, I danced with my friend and we laughed together, co-conspired about the future and dreamed big dreams. Last week, I helped her navigate the tangle of tubes upstairs to her bathroom and helped to carry down her commode, one more door closing to her once vibrant life. This beautiful woman, my wonderful friend, this tireless advocate who has done more than anyone I know, she has run out of time to do what she loves most and this brings her the most profound sadness. We are all running out of time but we’re just not so painfully aware of it.

This moment is the only time that we can count on. What are we going to make of it?
Posted by Marla at 10:12 AM