Patriarchy and Eating Animals: Why Violence has No Place in the Vegan Movement 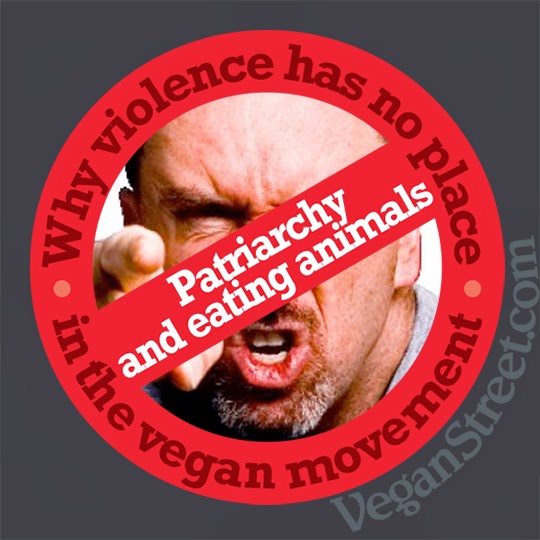 “The true focus of revolutionary change is never merely the oppressive situations that we seek to escape, but that piece of the oppressor which is planted deep within each of us.” - Audre Lorde
You don’t have to spend a lot of time on social media to see how pervasive the culture of glorifying violence against those who eat and harm animals is in the vegan community. It’s not something I see people acknowledging much, but there it is, every day, in comment threads regarding everything from intentional cruelty to the often-mindless act of eating animals.

“I’d like to smash his face in.” “I hope that dumb bitch gets what’s coming to her.”

I understand the anger, I really do. I spend my days researching and creating content to help with transitions and raise awareness about veganism. I understand as well as anyone the depths to which humanity will sink in order to excuse and maintain the status quo of our habituated use of animals. The mothers and babies ripped apart, the mutilations, the forced impregnations, the brutal suppression, the chillingly ordinary horrors we inflict on billions just so we can have “our” meat, dairy and eggs. Even in the absence of these glaring acts of cruelty, even with all the shiny bells-and-whistles of so-called humane meat and animal products, the idea that animals are ours to do what we will with simply because we desire to do so is anathema to me. I don’t need the gross injustice explained to me; I spend my days absorbing it and, more often than not, I lie awake at night with the atrocities I’ve seen haunting my thoughts like a horror film on a reel that simply won’t end.

I understand the anger and I even understand the impulse to be violent given what animals go through and how the voices against it are routinely derided, undermined and suppressed. It’s maddening to know what these animals go through needlessly and to not be able to get people to listen, let alone acknowledge, the astonishingly sad reality we inflict upon these innocent beings. I have fought for the animals since I was a teenager and, like many people, have been harassed, mocked, verbally abused and even arrested because of my passionately held beliefs. As well as anyone else, I understand the fist-clenching rage. Still…

“If you wear fur, you deserve to be raped.” “I’d like to run him over with a truck. Repeatedly.”

I cannot abide the culture of chest-thumping violence that is excused and glamorized by some in the vegan community and I’m not going to stay silent about it any longer. It’s not because I don’t feel the same sense of immediacy and conviction as others. It’s because I cannot stand the mentality that underpins the violence and I believe that these eye-for-an-eye sentiments – stretching all the way back to the fire-and-brimstone Old Testament, hardly a document of progressive, revolutionary change – stem from the same warped lens of patriarchy that has justified and allowed the domination of other beings to continue and expand without interruption. The violent messaging within vegan culture – alongside the grandstanding, the posturing and the bloodlust – is not part of the world I am trying to create. These are the shackles that I would like to leave behind.

I believe that using animals for our purposes is born of the same mentality as patriarchal society, which uses the same blunt instruments of control and violence to keep some at the top of the pack and the "lessers" below them, serving them. It seems short-sighted to be exalting the violence that grows from the same seed of domination, suppression and vengeance as that which says that animals are commodities to use as we wish. Unfortunately, though, when you speak up against this and say that maybe, just maybe, this swaggering bravado is reminiscent of the mindset of those who also harm animals, this is what inevitably happens: you are called a “kumbaya” vegan, which means that you are an airy-fairy coward. It is implied that those doing their best Rambo impressions are decisive, strong and courageous while you’re off in a little meadow in your mind, weaving wildflower necklaces and tickling ladybugs.

I call bullshit on this.

If violent grandstanding is framed as courageous and masculine, then the voices against it are cowardly and not masculine and suddenly we’ve got sexism problems, too. If chest thumping is strong and those who reject that mentality are weak, then, once again, the twisted and sick paradigm that has harmed and destroyed so many is accepted and strengthened. With buying into that same violent messaging, we have accepted the patriarchy and with it, the Old World Order that is rapaciously destroying our planet and its inhabitants. Our actions are still driven by sick beliefs because we haven’t examined and rejected what we are accustomed to in times of conflict, which is the template of patriarchy.

If we keep repeating the same mistakes, we will have the same nihilistic outcomes. How can we expect different results for changing the world when we continue to glorify and romanticize violence? This is not to say that I have the answers. I would do anything I could to protect my son from harm, for example. Sometimes, that might necessitate a violent response. Venerating pain, suffering, rape, destruction and violence is not the path to the world we are trying to create, though; it is part of the same limited mindset. Just like violence does not equal strength, rejecting it does not equal cowardice. It’s time for a new approach, one that rejects both patriarchy and speciesism, with bold, courageous, creative and radically forward-thinking actions. I don’t know what it will look like yet but we have to start somewhere.

In the meantime, let’s think before exalting violence. Our voices aren't all going to sound the same, and that's a good thing, but I can't see that we will ever create the world we want to live in if we, the very ones who are trying to create a major shift in consciousness, don't evolve ourselves. As Audre Lorde also said, “The master’s tools will never dismantle the master’s house.” In the vegan movement, there are many things that we are at odds with one another about but violence is one thing we should be unified against. There is nothing revolutionary or brave about it. In fact, it is the very mindset that has created the mess we are trying to fix.
Posted by Marla at 9:13 AM