Knocking a Leg from the Meat Industry's Tripod 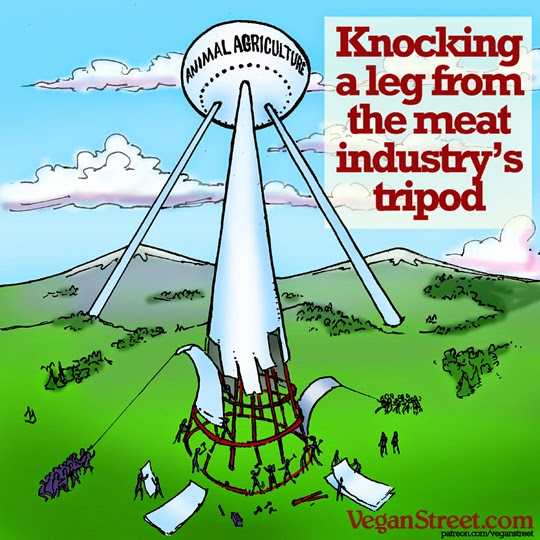 “The corporate revolution will collapse if we refuse to buy what they are selling – their ideas, their version of history, their wars, their weapons, their notion of inevitability.

Remember this: We be many and they be few. They need us more than we need them.

Another world is not only possible, she is on her way. On a quiet day, I can hear her breathing.” – Arundhati Roy

Often when I think about the industrial agribusiness complex we are standing up against, it feels like an enormous wall looming over me, so immense that it can block out virtually all the light. Just the shadow from it alone can make me feel utterly powerless. From the marketing that is so ubiquitous as to be invisible to the government collusion that keeps the price of animal flesh, dairy and eggs down, it’s very tempting for those of us who are advocating on behalf of the animals our society brutalizes to want to just hide under the covers for a day or a week or, you know, a lifetime when we think about what we are up against.

If I reimagine animal agribusiness as a tripod, though, rather than an unscalable wall, and I use this framing to inform my efforts, suddenly I have something to work with rather than struggle against. With this framing, I think we will make significant inroads to turning the tide. Animal agriculture is like a tripod that is stabilized by three powerful legs: two of them are the interests of government and industry, which work together to make the products of agribusiness widely accessible, inexpensive and normalized. What is the third leg? It’s so obvious that we often overlook it. It’s us.

With all my years of studying the industry, I can’t help but notice that there are, in fact, many deep cracks that crisscross its veneer of impenetrability, extensive enough that it is actually my belief that animal agribusiness is a lot less secure and stable than it gives the impression of being. If we were to withdraw our participation and help others to do the same, we would effectively send the whole jerry-rigged system tumbling like the giant house of cards that it is. Without knocking out the leg of our participation, the machine keeps running as it has. With the knocking out of that single leg, we would be kicking over the entire tripod that underpins and props up agribusiness.

When we think about the power that the government and industry wield, not to mention the other very formidable sectors within them, like the medical industry and the lobbying sphere, these mutually vested interests become Orwellian abstractions that are almost impossible to comprehend, much less feel equipped to take on. While I don’t want to underestimate or downplay the tremendous influence of these systems, I stand by the assertion that they are still fully subject to our participation. In other words, if we concentrate our efforts on disconnecting consumer support from animal agribusiness, it doesn't stand a chance of continuing.

This is not to say that industry and government – with their marketing, resources, influence, deception, deep pockets – aren’t forceful opponents. They are and they are so monolithic as to seem impervious. I understand the feelings of despair and hopelessness we feel when we think of their supposed inescapability and this is why we should concentrate our efforts on that third leg, because it is real and it can be influenced. By going directly to people and helping them to withdraw their support of animal agribusiness, we are circumventing these parties that may have all the power in the world but cannot force products or practices upon a public that is unwilling to buy. They have used and will continue to use their best tools to keep the machine running as it is but if we divest and continue to chip deeper fissures into the industry’s façade of impenetrability, it will eventually collapse under its own weight.

That third essential leg – the stabilizing of the entire industry – is maintained by our participation: this is influenced by habit, tradition, culture, convenience, familiarity, discomfort with change, even memories. If we continue to make it easier and easier for people through education, great food, affordability, access to information, community and excellent resources, we will be cutting off the very lifeblood of participation that agribusiness needs in order to continue. In other words, each time we make it easier, more appealing, more levelheaded and more undeniably rewarding to unplug from agribusiness and plug into veganism, we weaken the giant machine that depends on our participation and we strengthen the vegan movement’s inevitability.

In her beautiful book on the practice of writing, Bird by Bird, Anne Lamott wrote of her brother, ten at the time, who was completely overwhelmed by a large book report he had put off until the last minute to write. Books and resource materials, paper and pencils were splayed out around him as he sat at the kitchen table, barely holding it together. Her father put his arm around her brother and said, “Bird by bird, buddy. Just take it bird by bird.” This is the approach we need to take as well: person by person. If we continue to apply our talents, resources, attention and acumen to knocking out that third leg, I have no doubt that the entire tripod, propped up by us through our undergirding of cooperation, will crash.
Posted by Marla at 11:18 AM