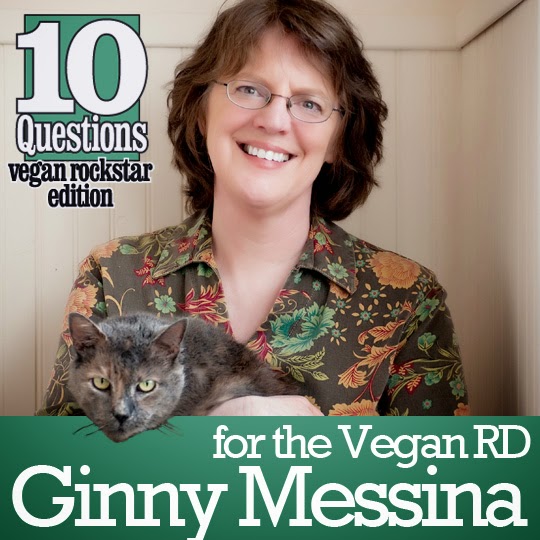 GinnyKisch Messina is a bright, steady light of compassionate, knowledgeable and dependable outreach in a culture often overstuffed with flyaway bits-and-pieces of erroneous information. As a respected registered dietitian, Ginny has instructed at the university level, developed nutrition materials for many organizations, and co-authored a variety of books that manage to make the subject of nutrition both accessible and interesting to laypersons, such as with Vegan for Her and Never Too Late to Go Vegan. She also maintains a popular blog, which is a great source for nutritional information and analysis.

A longtime vegan whose well-reasoned approach to nutrition is guided by the latest in peer-reviewed research, Ginny doesn’t make far-fetched, easily refuted claims, unlike the preponderance of various “wellness gurus” who claim that their interpretation of the ideal vegan diet offers a magic bullet against disease and illness. Ginny could probably have made a lot of money touting a specific dietary plan as the one true path to wellness and staying slim, but she has resisted this seductive siren’s call for something far more respectable, though less personally lucrative: By reminding people that a vegan diet does have some real health advantages, the fact remains that no one is indestructible, and that creating exaggerated claims about veganism doesn’t do the cause or the animals any good. Instead, by steadfastly chipping away at common myths and misconceptions, while maintaining her principled, rigorously science-based approach to nutrition, Ginny is creating something much better, and longer lasting, for the world: An educated interpretation of the most current knowledge of plant-based nutrition and a dedicated reminder that veganism is rooted in compassion, not dietary faddishness. For these reasons and more, Ginny Kisch Messina is a vegan rockstar.

I really didn’t have any of those influences or experiences. But for as long as I can remember, I’ve had a strong connection to animals and an extreme reaction to their suffering. I just didn’t see my food and clothing as having anything to do with that. While that seems mindboggling to me now, it also makes me realize how important it is to help people see the food on their plates as real animals. It’s hard, because we are so conditioned not to see that.

I started connecting those dots when I was in my 20s and was experimenting with vegetarian cooking just for fun. It had nothing to do with animal cruelty - I knew nothing about factory farming at that time - but instead, the idea of eating animal flesh suddenly felt simply wrong to me.

I didn’t learn about factory farming until I went to work a few years later at PCRM in 1990. This was also my introduction to an animal rights culture and to the whole concept of veganism which, until then, had felt very extreme to me. So, while my heart had always been open to animals, my eyes weren’t opened until well into adulthood.

People can’t do something if they don’t know how to do it, so I’m a very big fan of food activism. Potential vegans need to taste great vegan food. They need recipes for super easy meals (or really, they need meal ideas; most people don’t have time for recipes).  They need to know that vegan diets include treats and comfort foods. I think it’s much easier to get someone to hear a vegan message once they know that vegan food is good.

And then we simply need to get them to think about the impact of their choices. Humor can be good for this, or any message that is a little provocative. Vegan Street is great at this, of course, and I also love the Vegan Sidekick cartoons.

The fact that we have truth on our side. That this is a movement built on values of justice and compassion. And that it is increasingly easy to be vegan with really good food, incredible cookbooks, and some exceptional convenience products.

Probably the biggest one is that we are dealing with habits and beliefs that are so deeply ingrained and we don’t have good data on what works. We desperately need research on the best ways to promote veganism and to help people stay vegan.

I think it might also be harmful in the long run when we overstate the benefits of vegan diets in an effort to get more people to stop eating animals. The idea that a vegan diet is the only healthy way to eat isn’t backed by science and it’s probably not true. It’s a waste of valuable resources to try to prove something that probably isn’t true. It also forces us to cherry pick evidence and distort findings.  I worry that it detracts from the strengths of our movement - the integrity that is at the root of an ethic of justice - when we misrepresent the science behind nutrition.

Also, some of the bad nutrition information that circulates on the internet and elsewhere can set people up to fail on a vegan diet. This is largely why my work focuses on sharing the best guidelines - based on what we know right now - for staying healthy on a vegan diet.

Finally, I think we need to stop making it so hard to be vegan. We need to allow new vegans to sometimes fall short of their goals without feeling that they have failed at being vegan. We need to drop the unwarranted restrictions against veggie meats and soyfoods and vegetable oils and all of the other things that fit very well in a healthy vegan diet and make this way of eating a far more realistic choice. We need to avoid turning veganism into a restrictive fad diet because restrictive fad diets generally don’t change the world.

I’m vegan because there is always suffering and death behind the use of animals for food and clothing. As long as there are alternatives - and there are some pretty great ones - I just don’t feel that I can contribute to any of that suffering. And because I’m a dietitian, I’m confident that vegan diets are safe and nutritious.

My evolution continues to be both professional as a vegan nutritionist, and personal as an activist. On the professional side, those who have had the biggest influence on my thinking and approach to nutrition are Jack Norris, RD, Reed Mangels, PhD, RD and my husband Mark Messina, PhD. They are my go-to experts for unbiased and critical perspectives on nutrition research.

On the personal side, I’m inspired by many, many activists, especially those doing grassroots activism - handing out leaflets and food samples. And, of course, the very brave activists who shed light on what is happening inside of farms and slaughterhouses.

I also read a lot of blogs and websites that provide different perspectives - those focused on abolition, utilitarian approaches, direct action, etc. I often find my own viewpoint challenged, and that’s good. It relates back to my answer to question 5: We don’t have data on the best tactics, and so we need to stay open to all experiences and viewpoints.

Burnout, stress and depression are definitely issues for me and so I try to maintain at least a little bit of balance. I do the usual stuff - meditation and exercise. I keep a journal and have done so since I was a teen. I read a lot for pleasure and that’s my absolutely most essential and beneficial leisure activity. I’m learning to play piano and I crochet with vegan fibers in the winter and garden in the summer. And sometimes I just have a glass of wine and watch re-runs of Modern Family.

Advocating for homeless and feral cats. I volunteer at my local animal shelter and am on the board of a local spay/neuter group. I’ve done lots of TNR and cat fostering over the years. It’s really where my heart is, but also, I think it’s so important to remember that veganism doesn’t start and stop at your dinner plate. We have an obligation to all animals and especially the ones in our own neighborhoods and communities.

A moral imperative for those of us who are fortunate enough to have a choice about what we eat and wear. A willingness to commit to an ethic of justice and compassion, and to make choices that reflect that ethic.
Posted by Marla at 8:45 AM