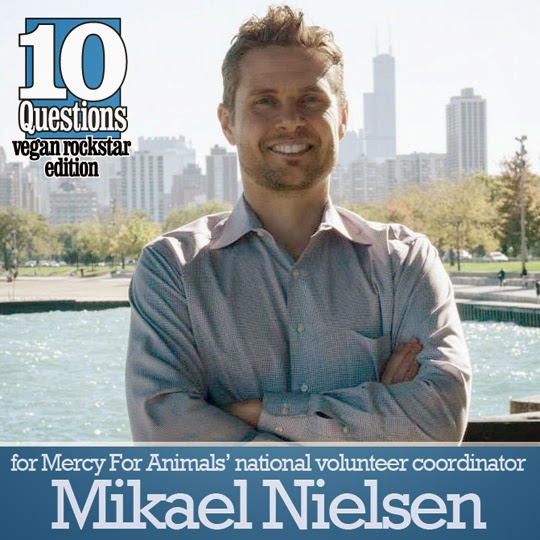 I love Mikael Nielsen. There, I said it.

Through his tireless work as National Volunteer Coordinator for Mercy for Animals, Mikael is responsible for getting dedicated and talented people involved in creating rippling, real change for the animals and the planet. He is also one of the most humble and hardworking people I know, though, giving his all to getting the message out about compassionate living and doing it in the most thoughtful, effective way. I think a lot of times we are so passionate about the cause, so driven to expose people to the unnecessary horrors inflicted upon animals, that we scare people away with our desire to effect change immediately. Mikael, though, through his years of advocacy understands the importance of blending patience and understanding with his very compelling message, helping people to trust that he is not there to judge, he is there to help people along the way to creating less violence in the world. He is an empathetic listener, a skill that is sadly often under-emphasized among advocates, and creates an environment of calm but focused attention wherever he goes. In doing so, he gives people the space to be honest, work through internal conflicts, and get in touch with their own values. In short, Mikael is, in his native Danish, vidunderlige. He is wonderful.

So, yes, I am biased. Mikael is a friend. Who wouldn’t want a friend like this, though?

I went vegetarian in 1996 and then vegan a few years later. But, it was not until 2002 that I realized being vegan was not enough and that I needed to get out there and create more compassionate people. After all, each new person I got on-board spared hundreds more animals from a lifetime of suffering. It was an EarthSave Chicago Conference for Conscious Living that opened my eyes to this and soon thereafter I joined the group and started doing outreach. Since EarthSave Chicago was led by you and John Beske at the time, I guess I owe my start to you. Thanks!

2. Imagine that you are pre-vegan again: how could someone have talked to you and what could they have said or shown you that could have been the most effective way to have a positive influence on you moving toward veganism?
I always wish someone like myself had come to my high school back in the day and given one of MFA’s humane ed presentations, which include our four-minute edit of Farm to Fridge. Seeing and learning about how horrific the day-to-day lives of farmed animals are would probably have been enough to at least start me down the path toward a vegan lifestyle and also gotten me active much sooner. Most people just have no idea how awful the factory farming system is, so I think that is a great place to start the conversation.

3. What have you found to be the most effective way to communicate your message as a vegan? For example, humor, passion, images… etc.?

I used to be a very self-righteous vegan activist and thought I had all the answers. Sadly, early on I probably turned off more people than I ever convinced to give veganism a try. Makes me cringe when I think about it. Now, one of the first things I tell people is how far from perfect I am and that we all cause some sort of suffering in our lives. We are all on our own path and I think we should strive to do our best, wherever we are in our lives. That means meeting people where they are, whether that is cutting out chickens from their diet, doing Meatless Monday, trying to go vegetarian, or making the switch to being vegan.

Applaud them for getting to where they are and then help them take the next step, whatever that may be. Along those lines, I think it’s very important that we not only focus on the “why” when it comes to ditching animal products, but also the “how.” We need to give people the tools to live healthy and compassionate lives for the long term. That is why I love MFA’s FRESH booklets and Vegetarian Starter Guides. They do just that.

The greatest is, without a doubt, this awesome community of compassionate people that grows by the day. I am so honored to know all these amazing people doing fantastic things for animals all over the world. And one of the best parts of my job as national volunteer coordinator is working with our volunteers all across the United States and helping them get started or stay active. Most have full-time jobs, yet still dedicate an incredible amount of time to animal protection. Inspires me to do more myself.

As Gandhi said about the path that many social justice movements take, “First they ignore you, then they laugh at you, then they fight you, then you win.” I think we are definitely in the “then they fight you” stage of things and the animal agriculture industry has been pushing back, most notably in the form of ag-gag laws that prohibit undercover investigations at factory farms and slaughterhouses. But more and more, people are seeing through this tactic and asking, “What are they trying to hide?”

Fortunately, these blatantly unconstitutional laws are now being challenged in the higher courts. I think in the long run Big Ag will regret this tactic in a big way. These industries also have millions and millions of dollars to spend on marketing and we have seen a big push toward “humane” animal products (humanely raised meat, cage-free eggs, etc.). Of course, there is no such thing, so we need to be vigilant that people don’t fall into this trap and think they are supporting an industry that cares for these animals. Nothing could be further from the truth.

Eating animal products causes unnecessary suffering. It really is that simple. And we would never do these things to an animal ourselves, so we shouldn’t be paying others to do our dirty work for us.

7. Who are the people and what are the books, films, websites, and organizations that have had the greatest influence on your veganism and your continuing evolution?

As I mentioned, John Beske and you, as well as fellow EarthSave Chicago member Bob Schwalb, had a big influence as I got started. Seeing The Witness at that same conference was also a real eye-opening experience. My future boss, Nathan Runkle, has also been a great influence, and his bringing MFA to Chicago was another huge moment. Nathan was such a hero of mine and after volunteering with MFA for over six years, that move to Chicago eventually led me to leave my corporate job and work full time at MFA.

One of my best friends is Jon Camp from Vegan Outreach and he has also had an incredible impact on who I am both as an activist and as a person. All around solid guy and they don’t come much better than him. Lastly, Nick Cooney’s two books, Change of Heart: What Psychology Can Teach Us About Spreading Social Change, and Veganomics: The Surprising Science of What Motivates Vegetarians, from the Breakfast Table to the Bedroom, really helped me fine-tune my activism to be as effective as possible and I can’t recommend them enough.

8. Burn-out is so common among vegans: what do you do to unwind, recharge, and inspire yourself?

I think it’s so important to be compassionate to ourselves as well. I go to the gym almost every morning and find that incredibly useful in keeping my sanity. I also do yoga and try to meditate every day. I love kicking back with my girlfriend, making some delicious vegan food, and watching a movie. And I very much enjoy hanging with my companion dog, Oliver. He is with me almost every hour of the day and his tail is always waggin’. Our new favorite spot is the dog beach down by Lake Michigan. I think we both leave recharged after a nice walk along the lake.

I have dedicated my life to reducing the suffering of farmed animals. Since 99 percent of animals who are abused, exploited, and killed are farmed animals, and because of the degree to which they suffer, I think it is the most important social justice movement of our time.

… about living my morals and values.” Most people claim to love animals and care about how they are treated, but their actions just don’t match up with their beliefs. I think bridging that divide will go a long way toward a more compassionate world for all of us.