Of Butcher Shops and Billboards that Bully 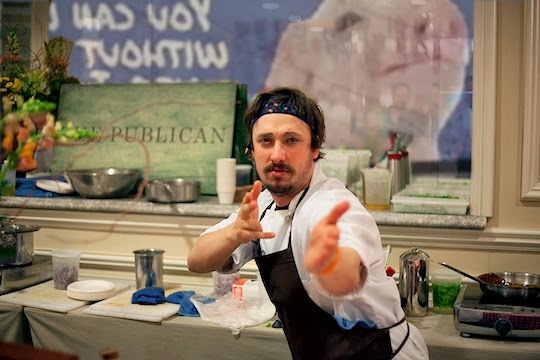 Last week, there was a bit of a local news story turned national hug fest for heritage carcass carvers everywhere when an esteemed Chicago meatery called Publican Quality Meats responded to a billboard that PETA had rented near their shop, which happens to be in the old meat-packing district and is a hub for trendy, upscale restaurants today. PETA’s billboard simply read, “You can live without those ribs. I can’t. Try vegan,” with the image of a piglet. (No Lettuce Ladies? No puerile sexual double-entendres? Oh, PETA, you always keep me guessing.) PQM responded to the billboard with the kind of chillingly convoluted doublethink that never fails to turn me into a human version of these pugs but still, it’s what I have come to expect from those who claim that we can simultaneously “love” and “honor” animals while killing, dismembering and profiting from them. In other words, there’s nothing new here. [Breathing, breathing, breathing...] It’s the sort of obvious contradiction that I have come to learn is very hard to notice if one is still participating in consuming animals.

In their message to the public, PQM pulled a card that surprised and delighted their fan base of affluent meat-eaters: they characterized themselves as advocates for animals. In asserting that their beliefs about the ethical treatment of farmed animals were similar to that of PETA with the exception of that niggling difference of, you know, eating (oh, and profiting from) their segmented parts, PQM tried to neatly sidestep the issue as if it were a mere difference in personal taste. “Hey bro, it’s like you like Coke and I like 7-Up. One is a cola, one is the un-cola, but we’ve got more in common than we don’t. We both love carbonated beverages. World peace! Now let’s go Instagram some charcuterie...” [Seriously, entering deep breathing time: in with peace - one, two, three - out with anger - four, five, six....] With evidence that they cooly presented as proof positive of their honoring of animals but is, in fact, actually deeply fetishistic (“This is why we do not waste a molecule of these beautiful animals. We process them into headcheese, marrow bones, cured meats, cooked meats, ham hocks, regular cuts, blood sausage. We feel this honors the life of the animal and is the right way to do this kind of work”), it is important to note that industrial agriculture is as, if not more, resourceful at extracting every last, um, molecule of a beautiful animal’s corpse than a trendy butcher shop could ever be. This is what industrial agriculture does best, just without all the chest-thumping and backslaps to themselves and, implicitly, their customers. In this fusing of their economical use of another’s various body parts with the higher ideals of honoring them, a disturbing inability or unwillingness to parse fairly essential differences is revealed.

Reading the articles and comments on the various news sources [still breathing here], I saw this same phenomenon again and again - the inability or unwillingness to parse essential differences as PETA and their billboard were repeatedly referred to as “bullying” the sweet little exclusive butcher shop. Really? Never mind the fact that the placement of the billboard far more likely has to do with its close proximity to Chicago’s restaurant row and the significance of it being in the meat-packing district rather than near one specific butcher shop, there is a bigger problem here. Specifically, let’s look at the word bully and the charge of bullying. Bully, used as a verb: (To) use superior strength or influence to intimidate (someone), typically force him or her to do what one wants.

What is true bullying? To erase the sovereignty of one’s own selfhood, of one’s own body, and force another’s desires upon that being. To impose the will of those in power over the fundamental rights of those who are not in power. Vegans represent between two-to-three percent of the population at most; this is incredibly light resistance against the ingrained, entrenched institutions and customs that buttress the habits people enjoy. Are we really supposed to believe that a billboard that merely asks for consumers to consider what they are eating to be bullying? What’s more, those who speak up for those who are truly oppressed are now the bullies? And those who are complicit in the exploitation of others (intentionally or unintentionally) have become the bullied? If we were talking about the government pushing this notion of bullies and the bullied, we could easily call that mentality Orwellian. Because our societal use of animals is deeply-rooted and systemic, omnivores refer to what they do as within their rights and when their “personal choices” [breathing...] are criticized by killjoys, their feelings are hurt. They feel constrained. Hence, the meat-eating public has effectively felt bullied by a pretty tame billboard.

Holy moly, what a strange place this is sometimes.

What kind of irrational, tangled world do we live in where the very small minority of people who speak out against the atrocities inflicted upon billions of innocent beings, something that 98% of the population aids and abets through their habits, are suddenly bullies for pointing out the simple fact these habits cause suffering and death? Stating a fact - in this case, that a pig cannot live without his or her ribcage - is suddenly a bullying action. If you are a meat-eater and you feel bullied by those who speak up for animals, I have some questions. When people speak up for animals:

* Are you fearful for your well-being?
* Are you exploited?
* Are you oppressed?
* Are you harmed?
* Were your rights denied?
* Is there a power imbalance that is unfairly inflicted upon you?

My guess is that if we replace the word “bullied” with “feeling guilty and upset about it,” or “feeling defensive about one’s privileges,” we may have a more accurate understanding of the dynamic at play. Because, let’s face it, who is really bullied in this equation? Quite obviously, the billions of animals, born into servitude and captivity through no fault of their own. They are forcibly impregnated (raped in human terms), castrated, docked and clipped without anesthesia, forced to entertain us, be experimented upon, live in filth, be slaughtered. Who are the bullied? Whether they are “heritage” animals or “lowly” chickens, graceful dolphins or silver fish in a river, when we impose our will upon the animals, they are the bullied. If we are willing to take off our blinders, it’s abundantly clear who the bullies and the bullied are here.

I am not saying that omnivores are all bullies. I don’t believe that at all. I just think that most people are not awake to the horrors inflicted upon the animals and their role in it. Before I stopped eating animals, I wasn’t able to face this either. It’s understandable. What is abhorrent to me, though, is this charge of bullying when the curtains that obscure cruelty to animals have simply been gently pulled back. That is not bullying. That is called honesty.