Soy Will Kill You DEAD, Part II: Revenge of the White Menace 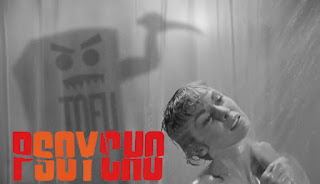 Because what prequels, sequels and cheap genre film knock-offs lose in originality, they make up for in sheer bombast.

A couple of years ago, we explored the nuttier side of the Weston A. Price Foundation with this leaked (and almost certainly satiric) article from their (completely made up but they should totally have one) Office of Soybean Literacy. Today, we are presenting some rough film sketches should the WAPF ever want to dabble in filmmaking. Why should they limit themselves when the opportunities to expand the reach of soy demonizing scare tactics are so abundant?

Soy answered the ad for a roommate. Soy seemed kind of shyly awkward at first in a way that was kind of charming but that didn’t last long. Now you have a mess on your hands. Soy has an unnerving habit of staring at you while you eat. Soy smirks when you stub your toe and coughs without covering its mouth. Soy brings one of your magazines into the bathroom, stays in there for forever, and never washes up afterward. You are pretty sure that soy eats straight out of the peanut butter jar. Soy puts its dirty dishes under the couch and slathers the fancy preserves your parents brought you back from Europe on cheap gas station bread. Soy’s friends are also all gross and rude and quite possibly kleptomaniacs. Soy borrowed your bra without asking and you found your favorite leggings in soy’s dirty laundry, all stretched out and ruined. Soy smokes late at night and leaves stubbed out cigarettes in your favorite aloe vera plant. Soy uses the last of the toilet paper and doesn’t replace it, eats all the ice cream and then puts the empty carton back in the freezer. Soy hides the bills and gets the utilities turned off. It gets worse: soy has loud sex with some creepy low-life it picked up late at night. When soy tries to seduce your boyfriend, steal your identity, impersonate and stab you to death, it should come as no surprise.

The Soy Next Door

Everything was really nice and peaceful on your block until soy moved next door to you. Now in the summer, soy sets its sprinkler so the water hits pedestrians and in the winter, soy never, ever shovels the sidewalk. Soy scratches itself impolitely in public and belches. Soy lets its baby walk around all day in the same nasty diaper. Soy answers the front door in its dirty underwear. Soy’s front yard is strewn with litter, Popov vodka bottles and weeds. Soy smells like b.o., cigarettes, cheap beer and God knows what else. Soy sits on a stained couch with springs poking out of it on the front porch, leafing through a Hustler magazine and makes everyone in the neighborhood uncomfortable. Late at night, soy pulls bulky industrial garbage bags out the door and buries them in its back yard. Soy is damaging your property value every single day. Soy has a beater car on concrete blocks on its oil-stained driveway that cats are yowling and breeding in. Soy hocks loudly and spits on your roses. Soy has some really trashy exes and they are uniformly crazy; they stagger around outside soy’s house in the middle of the night, drunk, crying and screaming, banging on the door. Soy stares at your ass when you walk by and sometimes does a slow whistle. Soy brings back losers from the sleazy bar down the street and they have loud fights and puke on your lawn. They may even do worse. Oh, Jesus. Is soy touching itself? Soy does not give a fuck.

A Nightmare on Soy Street (Other possible titles: When a Soya Calls; Parasoya Activity; Children of the Soy; Creature from the Soy Lagoon; Edamame Dearest)

Soy occurred in a disastrous laboratory experiment when the DNA of a psychopath got mixed with rabies, herpes, car alarms, mosquitoes, primordial sludge, used tissues from the Westboro Church office bathroom and whatever disgusting gunk they could scrape off the floor of a peep show in the world’s seediest neighborhood. The lab, built on the site of an ancient Indian burial ground, is also cursed and radioactive. Soy overpowered the laboratory worker and ran into the night. Soy is actively reproducing itself, building a formidable army of unstoppable, dead-eyed soys. Soy feasts on wide-eyed young virgins. Soy will also feast on you. Soy is scaring you late at night and no one believes you. Soy is looking in your window; soy is hiding in the back seat of your car. When the phone rings and all you can hear is breathing on the other end, it is soy. Soy is now living in the sewer, having scared away that freaky clown from that Stephen King book. Soy has sharp daggers for fingers. Soy is watching you when you’re fooling around and it’s safe to say that soy doesn’t like it one bit. You can run and hide, cowering in a closet, but soy knows where you are and will keep coming at you. Soy implants itself in you, grows like a demonic phytoestrogenic fetus inside you, leaching off of you and your organs until it has come to full-term and no longer needs you as host and then soy will horrifically explode out of your ribcage, spraying blood and viscera everywhere. You may think you’ve killed soy but soy springs back up again and again and now soy is beyond pissed.

It’s no laughing matter. This little bean is a cold-blooded, serial-killing machine right down to its very fiber.

I'm thinking Wes Craven or Rob Zombie.
Posted by Marla at 8:16 AM