Meet me at the intersection of Whale Bait and Misogyny... 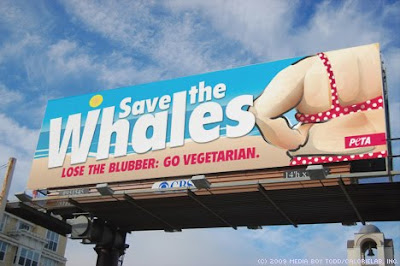 In PETA's most recent ill-conceived but predictably mean-spirited billboard campaign against women, Jacksonville residents are asked to "Save The Whales": this time, overweight females in red polka dotted bikinis. (I will not boost their numbers even slightly with a link: you can find their campaign with a simple search.) Maintaining their now-standard practice of disingenuously and steadfastly avoiding the core problem in their message, when questioned about the sexism of their campaign, a senior PETA campaigner clutched her oyster-free pearls and claimed a benevolent motivation: they are simply trying to help those poor fatties! Okay, she didn't exactly say this, but she did in so many words: she said that they "...weren't trying to insult anyone..." but that they are trying to "...help overweight residents [a.k.a., the female population] of Jacksonville...lose weight."

First of all, if they don't want to insult anyone, well, then it might behoove them to brush up on some basic etiquette. PETA has now become That Person. Do you know whom I'm referring to here? The one everyone has learned to avoid because of her habit of offhandedly tossing dagger-like insults this way and that in her quest to "help" others? We all have known someone like this at some point in our lives and we all avoid her now. This person has so little self-awareness that she has no idea why she is no longer invited to parties, why no one returns her phone calls, why former friends seem to disappear into the ether. Basically, she sucks and even if it's sometimes impossible to tell if she's passive-aggressive or just plain insensitive, it is abundantly clear that either way, we know she is not someone anyone wants to be near.

Regarding the other aspect of PETA's campaign - the latest in their string of attacks against women somehow tied up in a poorly articulated, incongruous attempt to shame people toward vegetarianism - my patience with social justice movements that refuse to acknowledge the obvious intersectionality of one form of oppression with another grows more frayed by the day. Ping! Another strand just snapped. And it's not "just" the approximately 3,301,112,087 women of the world who are considered fair game by the creative brain trust at PETA: they have willfully cultivated a blindspot the size of the Atlantic ocean when it comes to acknowledging all commonalities of discrimination and oppression except for when it benefits their cause. If it was decided that they could use imagery from the deplorable "sport" of "midget" tossing to encourage people to do more salad tossing, PETA would have no compunction about doing this. Well, damn. I hope that I didn't just give them an idea.

In that spirit, let's just let it all hang loose and commence to grabbing from one injustice or exploitation to stupidly try to decrease another. We will ignore that it makes absolutely no sense strategically - and, in fact, you've strategically painted yourself in the corner - and that it's ineffective to boot. Let's see what other organizations can do to boost their notoriety - I mean, spread their message - PETA-style. The points where exploitation intersect must be obliterated!

ACLU
Inspirational idea: A commercial campaign and libertarian's wet dream!
Execution: Strippers shed clothes while reciting your First Amendment rights and - quick cut! - Rebel Chef-Provocateur Anthony Bourdain picks it up where they left it off, while eating foie gras off an endangered rhinoceros' rump and smoking a Cuban cigar.

United Students Against Sweatshops
Inspirational idea: Tie up young scantily-clad female college students on campuses across the country to dramatize the cruelties of sweatshop production.
Slogan: We're All Hot And Bothered About Sweatshops.

Global Exchange
Inspirational idea: Bring awareness to the exploitation of cocoa plantation workers internationally.
Campaign: Fair-trade chocolate wrestling contests on college campuses across the country until there is one winner. She gets to have her naked body cast in fair-trade, organic chocolate and displayed in a traveling exhibit across the country.