My little sidekick is gone. Absent. Vamoose. I shouldn’t be so dramatic. Allow me to restate: for at least seven hours every Monday through Friday my son has skedaddled from my life. No need to issue an Amber Alert. My son is finally in all-day school.

It was inevitable. Kindergarten last year was a loosey-goosey half-day of song and revelry, as were all the years of pre-school proceeding it, and those little three hour spans were all either of us was accustomed to with school up until now. A week after diving into the grueling rigors of first grade, he seems to be rolling with the whole sitting-at-a-desk and eating-lunch-with-hundreds-others just fine. My one and only has flown the coop without much of a glance behind, no feathers terribly ruffled.

The decision to have a single child is one that has always felt right to me. My reasoning is that I get to have the motherhood experience while still enjoying a full life outside of being someone's mother. My friends who have more than one child lead active and interesting lives, rich with the interesting stuff of life outside of motherhood, but I know for myself it would be the death knell for any hope I have of living a creative life. I have never been someone for whom it is natural to juggle and multitask: I can do it and I have to all the time, but I am just not particularly adept at it. When I try to juggle for prolonged periods, it means that stuff gets dropped, broken, inadvertently trod upon. For me, being able to really dig in and concentrate on the task in front of me is essential to that being both a gratifying experience and me being reasonably successful at accomplishing it. When I have a bunch of different responsibilities vying for my attention, I just sort of become dysfunctional and, well, unpleasant to be around. When I have two or three Big, Important Responsibilities - say, for example, raising a child, writing a novel, organizing an event – along with a reasonable cushion of time to be able to devote to them, I'm in my element. Too many dependencies that demand my attention and my limited time resources, though leave me anxious and unfulfilled. I need to really dig my fingers into the rich loamy soil of all-consuming projects to function at my optimal best. 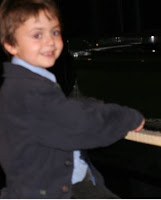 This awareness of my shortcomings has resulted in my unshakable conviction that if I had more than one child, I would soon be joining Sylvia Plath’s ghost and countless other defeated mothers with my head in the oven or jumping off the cliff or speeding away in the car without a license plate. It’s not because I don’t love children but more because I’m a fundamentally selfish person and I know that what I’m already giving – to my family, my friends, my cat, myself, my creative life, my interests – is not a boundless resource. I have to manage that tap pretty closely. There are women I see all the time, friends of mine even, with four or five children who are able to be present, to not be snippy, to not mind being called away every other minute to attend to a diaper, a snack, a spill. I have admiration for that Buddha-like quality of selflessness so many possess, the limitless font of unconditional nurturing, but, boy oh boy, that is not me. If there were only the option of raising five children or raising none, I’m pretty confident I know what I’d choose. I say this while loving my son with my whole flawed heart.

One of the real luxuries of being the mother of one is being able to truly concentrate on my child, or what my friend Rae refers to as my “little project,” fully. My son and I have always had a close, symbiotic bond, perhaps most perfectly represented by the freakishly short umbilical cord we shared between us. He was never the sort of toddler who wandered, who I had to worry about roaming into the street: he was always firmly planted, happiest in the arms of his parents or at our side. My mother has given voice to many worries over the years – that’s what she sees as her birthright, being a Jewish mother and now grandmother – and she has said in the past that she is concerned that our son is too close to us. The thing is, though, that he has always enjoyed going to school, never complained about us leaving him much past that first month or two of pre-school, and of course he likes playing with his friends with no grownups around. As he has matured, he has moved beyond his comfort zone socially and he is quite fine when we are out of his field of vision these days. For the most part, though, our son likes being with us, which I actually think is kind of cool. Of the things there are to worry about in life, should a close bond between parent and child even register, I mean as long as it’s not emulating something out of the Norman Bates family dynamic? I know there will come a day when he will lock himself in his room and barely manage eye contact with his me and my hyper-annoying motherly ways so I am enjoying our closeness while I can.

But now he’s gone for most of the day. The days of hopping on the train to go downtown – a museum? Millennium Park? - on an afternoon lark are behind us. The latitude one feels in pre-kindergarten and even kindergarten starts to dissolve as the expectations pile on, and with that our days of calling in with a stuffy nose so we can go to the free day at the Field Museum are, for the most part, behind us. I was given an amazing opportunity, a tremendous luxury of time that I am well-aware is quite a privilege – during which I could devote myself to raising my son and indulging our whims (among many other things). Now, though, the time of that freedom together is behind us as we move to another stage in life.

The past week has been difficult to get accustomed to, I have to admit. I keep expecting to see my little sidekick, the ketchup to my mustard, the Cisco to my Pancho, nearby as he has been for most of the past seven years. He’s not at arm’s length these days, spouting off theories of alien abduction (I have a delightfully strange child) and drawing elaborate space machines. We’re not taking off to the woods to look for signs of craft landings or investigating tree stumps for fascinating bugs. He’s at school, filling his classmates’ ears with the product of his very active inner world. I miss him, having his sweet face being nearby, his soft cheeks always available for a quick nuzzle. In some ways, motherhood is a process of continually saying goodbye.

Despite this, I have to say that I am also very excited about the easing up of my responsibilities as entertainment coordinator. Now I have the time I have been so longing for since my son was born to unabashedly follow my muse and wherever that leads me without interruption from approximately 8:00 a.m. until 3:00 p.m. Monday through Friday. This is going to be a time of growth for me, I can feel it, of moving beyond my own comfort zone. For the past seven years, I had a convenient excuse for not fully pursuing my creative goals: not enough time! Too many interruptions! (Not that I have been totally shiftless, just not as productive as I like to be.) Now I am ready to dive back into that world out there and commit myself to the new path I know is there, clearer dreams and ambitions.

My sidekick has moved on and now so will I. While there is a loss here, I am eager to see what this will mean for both of us.
Posted by Marla at 8:23 AM