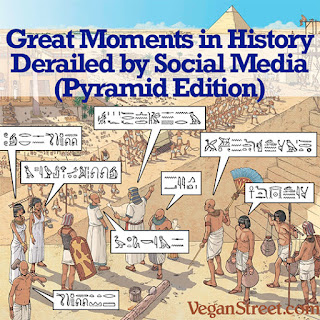 How it would probably go down if the person with the idea for building pyramids shared it on Facebook today instead of the 27 century BC in Egypt.
Person A: “Hey, all! I have this idea for a triangular building. It’d be a place to bury the pharaohs and their stuff for the afterlife.”
Person B: “Eh, like a tomb? That’s creepy.”
Person C: “@Person B, why do you think it’s creepy? Do you believe in ghosts?”
Person D: [Inserts random NeNe Leakes GIF]
Person A: “Yes, like a tomb, @Person B, but also an architectural monument. It’ll have tunnels and chambers and cool stuff like that but also be structurally powerful because it’d be lighter on top and the weight would be well-distributed. I think they could last a long time if they’re built with the right materials, too.”
Person B: “No, I don’t believe in ghosts, @Person C. Lol. Wouldn’t the body rot, though?”
Person A: “I mean, it’d be in a sarcophagus and we’d use mummification practices, so…”
Person B: “Still gross.”
Person C: “Lol, you do believe in ghosts.”
Person E: “I hate triangles.”
Person F: “I am also not a fan of triangles. They remind me of geometry.”
Person E: “Same, @Person F. I had such an asshole for a teacher. Got a D.”
Person F: “Better than me, @Person E.” [Eye-roll emoji]
Person G: “LOOOOOOOOOOOOL! You believe in an afterlife?”
Person H: “@Person C, I saw a ghost once. And I believe I was visited by my grandfather after he died.”
Person G: “Oh FFS! The woo has arrived.”
Person D: [Inserts random “eating popcorn” GIF]
Person I: “Sounds cool, @Person A. I like triangles.”
Person J: “If only we could bury the pharaohs while they were still alive. Inbred bigots.”
Person K: “If you like triangles, you should check out my little sister’s band rehearsal. She plays the triangle. LOL.”
Person H: Oh, okay, @Person G. The only reality is the one you see. Mmmkay. Talk about self-absorbed.” [Samuel L. Jackson meme]
Person E: “I’m with you, @Person J.”
Person G: “I suppose you believe in chemtrails and are an anti-vaxxer, too, @Person H?” [“Dumb hippie” meme.]
Person H: “What does that have to do with the topic? I suppose you only believe what is material. Albert Einstein said, ‘The most beautiful thing we can experience is the mysterious; It is the source of all true art and science.’ But I suppose you’re smarter than Einstein.” [Five laughing/crying emojis]
Person G: “Okay, blocked! Life’s too short.”
Person D: [Inserts random Jim Carrey GIF]
Person K: “‘Inbred bigots’? Um, sounds bigoted.” [Shrug emoji.]
Person F: “What if it was an inverted triangle?”
Person A: “An inverted triangle? It wouldn’t be stable then.”
Person H: “I see I’ve been blocked. Bye, Felicia.” [Random Rupaul’s Drag Race GIF.]
Person F: “It would be if the right person designed it.”
Person L: “What about a spaceship?”
Person G: “I don’t know what would be wrong with letting birds and wild animals eat their bodies. It seems like a waste of resources and time but that’s just me.”
Person D: [Inserts “Walk Like an Egyptian,” music video.]
Person M: “I’m pretty sure triangle buildings already exist.”
Person N: “I’m okay with triangles but I wouldn’t want anyone to build one next to my house.”
Person G: “I’m pretty sure no one is going to build a memorial to a pharaoh next to your house, @Person N. Lol.”
Person L: “The future is in underground houses.”
Person N: “Do you know me, @Person G? Why are you such a hater?”
Person O: “I don’t believe people should own property.”
Person P: “Um, do you own a toothbrush, @Person O?”
Person O: “Um, is a toothbrush property, @Person P?”
Person P: “Um, according to the dictionary, yes. Are you literate?” [Laughing-crying emoji]
Person D: [Inserts a different random popcorn-eating GIF.]
Person O: “Blocked. Another condescending white dude.”
Person D: [“That escalated quickly” meme.]
Person G: “Why did you make this a racial thing, @Person O? What does his color have to do with it?”
Person P: “Don’t you know, @Person G? Everything is about race now. lol” [Eye-roll emoji.]
Person P: “I can’t talk about anything without being called out as a ‘cisgender white guy’ anymore. Next I’ll be accused of mansplaining. I should just muzzle myself. Identity politics have poisoned our brains.”
Person G: “SJWs everywhere!”
Person Q: “Yes, damn those ‘‘SJWs’ for making the world a less oppressive, hostile place. [Sideways laughing face emoji] Such horrors they have inflicted upon us. Yes, I’m being sarcastic.”
Person I: “I thought this post was about triangle buildings…” [Thinking face emoji.]
Person P: “I’ve worked for everything I have.”
Person Q: “I suppose you’re color-blind, too? [Eye-roll emoji.]
Person P: “There’s no point in having this conversation. You’ve already stereotyped me.”
Person Q: “Nope. You stereotyped yourself.”
Person G: “LOL. Here we go again.”
Person D: [Inserts random SpongeBob SquarePants GIF.]
Person I: “Yes, here we go again.” [Kissy-face emoji]
Person I: “Why do you keep posting random GIFs, @Person D? Do you have anything worthwhile to contribute or do you only speak in GIF?”
Person D: [Inserts random another “eating popcorn” GIF.]
Person E: “I still hate triangles.”
Person F: “Me, too.”
Person G: “You’re actually the racist, @Person I. You are prejudiced against white people.”
Person I: “Ooookay. LOL. I *am* white.”
Person R: “Why the triangle hate?”
Person G: “Looks like @Person A has left the group.”
Person D: [Inserts random crickets chirping GIF.]
Person R: “I don’t know. I thought it was a cool idea.”
Posted by Marla at 11:53 AM