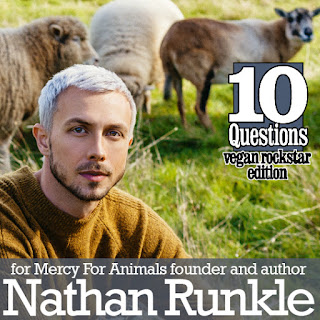 Back when Vegan Street was in its original incarnation, we had a P.O. box we’d check a couple of times a week for picking up t-shirt orders – so, yes, this was the olden days – and we would sometimes get a check from a young teen in Ohio named Nathan Runkle. We got orders from all over the country but there was something about these orders, written with a young person’s handwriting, sent from a town we’d never heard of in Ohio that really gave us a sense of hope and excitement for the burgeoning vegan movement we were just starting to notice rising up everywhere in those early days.

Today, of course, this young teen in Ohio has grown up to be one of the most formidable, respected and well-known voices in animal advocacy through his work with the organization he founded as a 15-year-old in 1999, Mercy for Animals, which has grown into a powerful force of change-making for farmed animals with Nathan at the helm, leading a dedicated, talented staff, inspiring countless volunteers, awakening many, many more and, most important, saving lives. I have so much admiration for Nathan and what he has accomplished so far, which is really still in its infancy, I suspect. Now, Nathan is doing a tour in support of his new book, Mercy for Animals: One Man’s Quest to Inspire Compassion and Improve the Lives of Farm Animals. Despite everything, though, Nathan will always be that sweet farm kid from Ohio to me, the one who gave me so much hope back in 1999 and has gone on to far exceed my expectations. Love you, Nathan Runkle! I am honored to feature Nathan as this week’s Vegan Rock Star.

My “vegan evolution” started with an evolution in my perception of animals. Sometimes big lessons come in small forms. In the book, I tell the story of Caesar, a beautiful Siamese rat, whom I rescued from a laboratory breeder when I was just six-years-old. Caesar became my best friend. He was playful, smart, and social and would come running when I called his name. But when I’d bring friends over to meet Caesar, many would shriek at the sight of him. "Eww! His tail!" they would say. They judged Caesar based on what he was, not who he was.

I began to realize that the prejudices we have about animals are really about us, not them.

It’s because of Caesar that I started to challenge the arbitrary lines our society draws between animals considered "pets" and "pests," "friends" and "food."

Simply having a positive, healthy, joyful vegan role model would have been super helpful for pre-vegan me. Someone who showed me that there was a way to live that reflected my compassionate values, was healthy for my body and spirit, and easy and delicious. I think for many people, having someone show them that there is a better way goes a very long way.

I always try to be authentic and share stories – whether they are stories of animals I’ve met, how great I feel being vegan, etc. Anytime we can speak from personal experiences with “I” statements, the less judgmental and threatening it is to others. No one can discount your own experience and feelings. I also always try to communicate from a place of love and understand, rather than judgment or criticism.

We have love, compassion and truth on our side.

If you don’t want to pay people to abuse animals in horrific ways on your behalf, going vegan is a beautiful way to live a healthy life that’s centered on compassion for all.

Balance is so crucial. We have an epidemic of burnout within the vegan and animal rights movement. It’s something we need to talk about and address, as we are loosing far too many people and with them all of their knowledge and skills. For me, it means taking care of myself – mentally and physically. Facing the reality of factory farming on a daily basis can be emotionally traumatizing. It’s important to recognize that, first and foremost, so we can nurture ourselves. For me, that means going to therapy, yoga, meditating, eating well, traveling, spending time in nature, exercising, laughing, and focusing on loving freely and openly.

There are so many – from LGBTQ rights to the protection of our environment. But the cause of so many of the problems facing our society today is the same: apathy. When we open our heart to the plight of “others” the world begins to transform in wonderful ways.

…the ultimate expression of love.
Posted by Marla at 10:20 AM