But He Does So Much Good: The Culture of Abuse Excusing Among Vegans 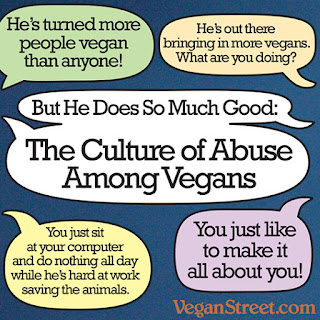 Given certain circumstances of my upbringing, I am pretty tuned in to a particular narrative of rationalization that emerges often when we talk about abusers or their abusive behavior. “He doesn’t mean what he says.” “You’re selfish for making it all about you.” It doesn’t take much insight to see that this repackaging of mistreatment is deeply dismissive to those who speak up and centers those whose words or actions are abusive as being of more importance than those who are harmed by them. This is a common theme in society at large. Disappointingly, this same framework of abuse excusing is woven through many corners of the vegan community.

You can see the stitch marks whenever a high-profile vegan individual’s bigoted remarks or an organizations exploitative campaigns are brought up and the narrative predictably goes something like this: He does so much good for the animals. Nobody’s perfect. (Echoes of: “Be quiet: He puts food on the table.”) Or sometimes the narrative takes a more combative tone, saying something like, Well, when you’ve done as much good as [insert name or organization], maybe then you’ll have room to criticize or, similarly, I’m not in a place to say anything because he/she/they have done far more than I ever could hope to for the animals. (Echoes of: “He’s a better man than most; you think you’re so perfect?”) The silencing effect is pretty potent because it seems that more often than not, it ends important conversations before they’ve even begun. Maybe that’s the point. Shut up. There’s nothing to see here. Stop being a whiner. Everything’s fine.

I saw the narrative happening predictably enough again last week when one prominent animal rights “hero” announced his retirement in a 2,300+ word public goodbye letter on Facebook, seemingly placing much of the blame for his departure at the feet of intersectional activists within the vegan movement. [Please read more by Professor Kimberlé Crenshaw, the woman who conceived the term intersectional and developed much of the theory, to understand what it means.]

The fact is that we all have to be responsible for our choices – we learned this in kindergarten, right? – and mature enough to handle it when people respond to our choices in ways that are not always admiring of us. Should abused people just shut the hell up about an abuser who does “mostly good” in the world? Similarly, should someone who is deified within a certain segment of the vegan movement but has made deeply problematic statements or created oppressive campaigns be above reproach when their words or actions have left no actual bruises but still contribute to an overall environment of violence and/or discrimination? Are we not allowed to speak up for ourselves or others until some vague day in the future when it’s suddenly the right time? Shouldn’t we be working to do our best as activists, while acknowledging that we’re not perfect but we can all do better? Shouldn’t the voices of those most harmed by bigotry be heard about how words do, in fact, matter, as these words have a great potential to alienate from or draw people to a vegan ethic? And shouldn’t vegans be doing our level best to reject a rhetoric of violence and not reinforce hierarchical power structures regardless?

Sometimes accepting responsibility will come in the form of an apology and an honest effort to do better. Too often, though, the more “famous” a person or organization, the more they will aggressively and angrily resist even the simplest attempt to make things right and commit themselves deeper and deeper to the mentality that is abusive.

When vegans publicly announce their rape, battery and murder ideation against non-vegans, promote regressive and oppressive attitudes about women, people of color and other groups, they deserve to not only be called out but openly rejected by the larger vegan community. They are not tough. They are not hard-hitting. They are certainly not a great voice for the animals. They are ensuring that the vegan “movement,” stays small, white and insular because they care more about their right to express their violent wish fulfillment fantasies and oppressive campaigns than do something that might shift us to an ethic of true justice and a new framework of respectful coexistence.

Want to help the animals? Learn how to be less oppressive to potential allies and learn how to say that you’re sorry. Mean it. Learn from it. Do better. A little humility goes a long way.