On Honoring Where We've Come from and Being Excited for Where We are Going... 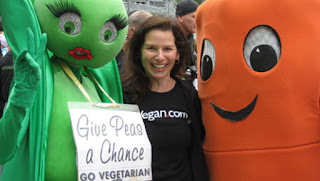 You know how in life there are a few people who you just recognize on a visceral level the first time you meet them? There is something about way that they look, the way that they move, the way that they think, something indescribable about their essence that just strikes a familiar chord with you. You feel an instant ease and compatibility with them, almost as if you grew up together as cousins or best friends even if it’s the first time you’ve met them. Being able to connect with someone like this - who you don’t need to explain yourself to, who also gets you so well, who makes complete sense to you - is a rare and exceptional treasure. Lisa was one of these people to me. I would say that when I first met Lisa Shapiro, she was someone I immediately recognized as one of my own.

From that very first day, Lisa impressed me with her vibrant, unabashed enthusiasm for vegan everything: culture, community, activism, businesses, children. I’ve never known anyone who was so positively lit up and fueled by this pure passion. It provided a bottomless source of invigoration for her. As a 30-year vegan, Lisa could easily remember a time of feeling very isolated and lonely with her veganism, a time when the same five (lovely) people would show up at potlucks, when no one knew how to pronounce the word, when we would be in such absolute disbelief to see the word in the mainstream media, we’d rejoice with every comic strip that made us the butt of the joke and we’d affix it to our fridges: who cares if people were laughing at us? We were acknowledged.

Just last October, shortly before she got the news of her advanced cancer, Lisa finally made it to Chicago VeganMania, an event that had been on her bucket list for years. I found Lisa as volunteers and vendors were running around, setting up in the hours before the doors opened, and made her walk around the outside of the building with me. I wanted her to see how people were lined up and snaked around the block all the way to the train station, to really see it with her own eyes before the busyness of the day swallowed us up. We walked together to the end of the line of people smiling, interacting, bursting with that pre-event buzz, and all along the way, she giving commentary, as much to herself as to me: “I just can’t believe this…this is amazing…is it always like this?...look at everyone!...wow!...you should post a video…this is just incredible…this is all for VeganMania?...holy shit!” Once the doors opened, I was very busy myself but I made it a point to look over at Lisa at the Tofurky booth at least every hour. The queen of all things vegan was radiant and grinning ear-to-ear in that irresistible way of hers, basking in the glow of how veganism was dynamically manifesting around her. Lisa was not well, we know this now, she was in chronic pain, but she was unabashedly lit up with optimism and pride, like a mother robin whose baby had jumped from the nest and was confidently flying on her own. Lisa was beaming with not only a mother’s pride but also astonishment at her baby’s accomplishments, more than she ever could have imagined 30 years ago as the solitary vegan trying to make her way through the world.

Exactly one month after Chicago VeganMania, I got the email from Lisa. She had stage four cancer. The cancer had metastasized to her spine - which was why her pain was so intense - ribs and pelvis. She had talked to every doctor, the biggies in the vegan movement were personal friends, and they all told her that there was no chance for recovery.

Over the next seven months, we talked as often as she wanted to talk. She didn’t want to bum people out, she told me. We cried together on the phone. I tried to make her laugh and sometimes I succeeded. At times, she wanted to forget the current situation that was consuming her life and gossip or brainstorm ideas. She got this death sentence, though, and with it, the doctor’s appointments, the increasing limitations, the time alone in her mind, the phone calls and messages she couldn’t bring herself to return that ate away at her still. She questioned why this would happen: wasn’t she a good person? We talked about karma (I don’t believe in it), the futility of regret, her fears, her hopes for her community in Boulder once she was gone. What she said that will stick most with me, though, was this plaintive: “You know what I am sad about the most? All that I am going to miss.”

It hit me right in the gut because I knew exactly what she meant.

In her 30 years as a vegan, she’d seen veganism expand far beyond the fringes and be brought to a place at the table. She’d seen dairy-free ice creams dominate whole freezers at the grocery store and vegan cheeses finally begin to shed the shudder usually associated with them. She’d seen families raising vegan children and watched those children grow up to become articulate voices of compassion. She’d seen activists using their creativity and brilliance to bring the discussion of what we do to other animals to the public. She’d seen the rise of entrepreneurs, filmmakers, artists, educators, attorneys, food scientists, permaculturists, podcasters, chefs, designers and more – people coming from all backgrounds and disciplines – bringing their talents and skills to promoting vegan values and building on what was here before. This was what she loved. This infused her with excitement and optimism.

All that she was going to miss.

When I left for Colorado to see Lisa, I had a collection of things to tell her about, to make her smile about. We talked about Gene Baur on The Daily Show (she already knew, even in her last months, she stayed on top of things), and I told her about this new innovation, a holy grail unlocked, which is vegan meringue. Her mind was blown. In an example of that ineffably Jewish sense of gallows humor mixed with her trademark guileless honesty, she said, “If I were going to live, I’d totally get a mixer to make this meringue.” I couldn’t help but laugh a little and then she looked at me and we both laughed. Then we cried. Lisa was fired up about veganism until the end but the bittersweet component of knowing that she wouldn’t be here to experience so much that is just around the bend created a strange reality, like seeing tree full of juicy, perfect peaches, being happy that others will enjoy them, but knowing that the fruits are just out of reach for you.

I think part of what made Lisa such a positive role model within veganism was her childlike enthusiasm for its emerging dimensions. She was someone who would have remained vegan regardless – remember, she powered through in the days before we had most of what we take for granted today, fueled by her steadfast love for the animals – but to get to see all the materializing communities, non-profits, businesses, events and more was like a gift that kept on giving. She was like a kid in the candy store that she helped to build, her eyes wide and sparkling as she took it all in. Lisa wasn’t a saint and she was very perceptive: she did not mince words about those who she thought were users, on a power trip, less than genuine and just cashing in. At the same time, that knowledge of where she started and where we are headed infused her with gratitude. She would never take any of this for granted. Despite the long road ahead, she was clear that we are finally at least on the road. We’ve come far; maybe we can take a moment to and feel grateful. We’ve still got a miles and miles and miles to go but we should never take our progress for granted.
Posted by Marla at 10:05 AM