An Open Application for the Position of Pope 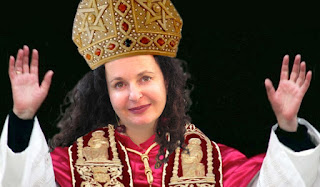 I am writing to you because I heard that there was a job opening and while I know that my precise qualifications may seem on the surface to be a bit of a stretch for the role, I would excell at the job of Pope.

I am well aware of the requirements of this position and so I understand that the issue of me not having a penis may be considered an immediate deal breaker. Oh, and not being Catholic. And just generally being undecided on that whole God thing, too. I get it; I’m kind of a mess from a Papal perspective. I’d like to propose, though, that we live in a world that is constantly evolving and adapting to changing mores. (I know the entire subject of evolution is in itself kind of a touchy one with you guys but maybe you can just let me run with it?) For example, thirty years ago, you could not have imagined that the President of the United States would be a bi-racial child of a single mother. Is it really such a leap, then, that a vegan, feminist Agnostic Jew (with pagan-Buddhist tendencies and a skeptical streak that kind of undermines all of the above) such as myself could be Pope? Think about it. Even on my worst day, there is no way that I would be as bad as Pope John XII (955 - 964 A.D.), a guy who turned the Vatican into a den of iniquity the likes of which Cagney and Lacey would gladly bust. I promise you that the Vatican I rule will not be turned into a brothel on my watch and I will not be giving away deeds to lands owned by the Catholic Church to my favorite mistresses. Nor will I likely be killed by an angry husband as John XII was, caught in bed with the man’s wife. The worst is behind you. I will never do anything like this.

Once you get over the stuffy notions of what a Pope should look like and how a Pope should behave, I think that you will see that I am actually quite perfect for the job. I may not be your father’s Pope but I have a proven track record of shaking things up, dating back to when I tried to stage an insurrection in my kindergarten class due to an outdated and rigid policy of enforcing the daily classroom nap time routine; I think that you will find that this kind of maverick leadership is just what the Church needs at the helm. I mean, Pope Benedict was nice and all that, but by most accounts, kind of a snore, right? Also, with all my various alliances to different communities, there are a lot of opportunities for crossover growth previously unexplored by the Catholic Church. I mean, had you guys even considered having an Agnostic Jew in the position of Pope before? How about an Agnostic Jew who is also a feminist, a vegan, and a woman? This is the kind of thinking outside the box I would bring to the job. There is so much value-added and possibility with re-branding with me as Pope that, wow, it kind of boggles the mind.

I sat down and scribbled some of my qualifications here and what I could bring to the Papacy.

* I am a hard worker, a good multi-tasker and a team player.
* I went through two years of Hebrew school so I have some religious training.
* I know Latin. (Ig-pay Atin-lay, but whatever.)
* I’ve cut way down on my swearing.
* I usually make all my deadlines unless there’s a retrograde happening.
* I’m a good cook and baker but I’m not really sure how this applies. Cookie Fridays?
* Even if a complete stranger sneezes in front of me, I automatically say, “Bless you.” Just like that. I was born for this job.

I have also outlined some of what I would change if I should become Pope. I mean, to be very  honest, it would be a complete overhaul, a gut rehab if you will, not just of the Papacy but the whole Catholic Church as we know it. I know that this might come off as kind of presumptuous for someone applying for a position to come in with this list, but, sorry. Or as my son - oh, yeah, I’m not a virgin - likes to say, “sowwy,” which is to mean that he’s really not sorry and he learned one that from me. (It’s the worst.) Anyway, please have an open mind. Even though I plan to change Catholicism from top to bottom, for my purposes here now, I will just stick to the specifics of the actual Vatican. We’ll get to the rest later.

* Okay, we will move the entire Vatican City operation to San Francisco. Why? Because I like it there. I can see from Google image searches that you guys like gold and shiny things and what city sparkles more than San Francisco? (I guess Las Vegas but, ew, I’m not living there.) Instead of blowing all that money on diamonds and gold, why not spend much, much less on glitter, rhinestones and cubic zirconia for much more glitz? So much more bang for your buck.

* I’m sure that you’re afraid that everyone’s going to be all freaking out about a vegan, feminist Pope but honestly, I think you should be excited to have the attention. Where else are you going to get a promotional bump as you would with this? In fact, as an attention grabber, with me, the whole Church should adopt immediate, unapologetic vegan and feminist standards of conduct as soon as I become Pope and anyone who refuses to follow the new rules would be ex-communicated.

* I am not wearing that hat thing. It would squish my curls, it’s tacky and it looks heavy. I would definitely consider all manner of tiaras, though.

* Speaking of, I am totally happy to maintain the tradition of wearing red shoes but mine will not be made out of animal skins. I have a sparky red platform in mind. I’ve provided a sketch. 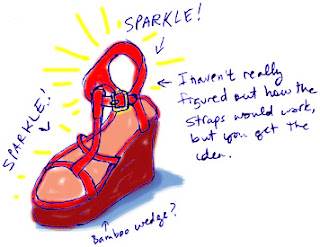 * The Popemobile is a little funky in a way that I like, but I think it needs some modifications, like fans with streamers. It can be spiced up. I’d also like to be able to toss out condoms like they do in the Gay Pride parades. (I know - contraception is another issue we’ll have. We’ll get to that.) Also: vegan chocolates! 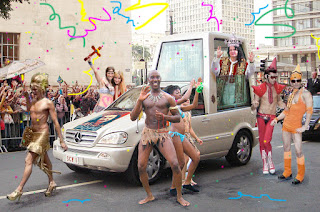 * Popes get a throne, right? I should really have a throne, I think. Bedazzle that sucker.

* The robes are made out of silk, I presume. That means silk worms would have been boiled alive and that is cruel. The robes would need to have a proper burial. You guys would have somoene to do that, right? Mondays are 30% off days at Unique Thrift and I bet I could find a killer outfit for much less. Saving you money again.

* Bulletpoint: Masses are boring from what I understand. Gangnam style? Are flashmobs too 2010 because that could be cool, too.

* One of the nice things about Judaism is that we’re not so hung up on the concepts of Heaven and Hell. I’d like to carry this over with me.

This is just off the top of my head. I am sure that once we meet, the ideas will just continue to flow.

In the spirit of full disclosure, I should also let you know some of my liabilities. I don’t consider the absence of a penis a liability so I won’t list it here.

* I tend to sleep in a little because I’m a night owl. Ideally, all Papal responsibilities could be handled after 10:00 a.m.

* My dog sometimes pees indoors if you don’t take him out right away. Is there someone to do this?

* I have a wheat intolerance so we should probably change Communion wafers. (What is communion about anyway? I should really learn about this.)

* I can be moody and mercurial sometimes but I forgive quickly, too. My husband knows just to stay out of my way when I’m in that kind of mood and I get over it. He can advise you.

* I think it may have actually just been one year of Hebrew school as opposed to what I wrote above. Who can remember? Boring!

As you can see, I would be an unorthodox but an exciting and different direction for the Catholic Church. I think I would rock it, quite honestly. You can call or email me with any questions or just leave a message in the comments if you are interested. I don’t do texting.

Thanks so much for your time, 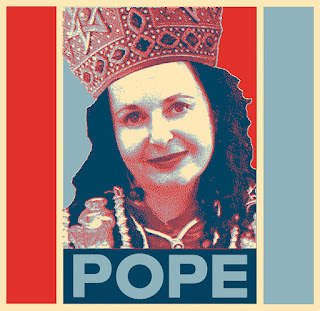